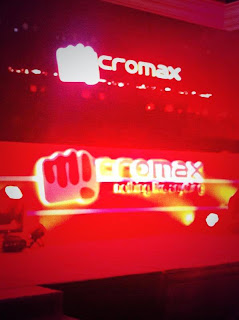 +Micromax Mobile  has finally launched the Canvas 4 in India for Rs 17,999. Micromax started pre-orderson June 28 and in the lead and received 11,500 pre-bookings for the much awaited device.
When you hold the device in your hand you can feel the sturdiness of the aluminium band that wraps around the plastic front and back, and it can be mistaken for a Samsung Galaxy S4 sans the branding.
With the launch of +Micromax Canvas 4, we have @iChitrangada as the new brand ambassador for the company.
Now to the specs, It is powered by the same MediaTek ARM Cortex A7 quad-core CPU clocked at 1.2GHz, 1GB of RAM that we have in the Canvas HD, but now we have a larger 5-inch 720p IPS panel and a 13-megapixel camera. The camera is also capable of a vertical panorama mode that was one of the USP in the recently launched LG Optimus G Pro.
Canvas 4 is also a dual-sim Android smartphone like its predecessors and comes with a 16GB of internal memory.

Micromax was seen blowing things out of proportion asking the starlet Chitrangada
Singh to blow. Oh we meant ‘blow at the phone’! Users can also restrain themselves from blowing in public and shake it (we mean the phone) to unlock it.

Oh by the way who blows it and who shakes it is not judged by the phone so your data is always ready to be blown or shaken away.
The device is available in limited number so but it till stocks last is being pushed along with the sales pitch. As an added accessory a special aluminium cover that’s worth Rs 3,000 is part of the package.
Photos by Neha Grover