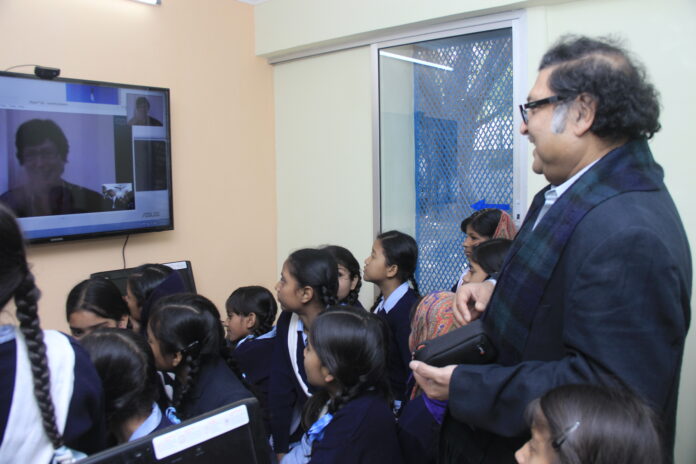 India’s first ‘School in the Cloud’ facility is off to an auspicious start: it’s located just across the road from the original Hole in the Wall that sparked a global phenomenon.

The Government Girls School in Kalkaji, New Delhi is a stone’s throw from where Newcastle University’s Professor Sugata Mitra first tested the idea of unsupervised learning using computers by carving a “hole in the wall” that separated his office from the adjoining slum.

Now it is to become India’s first link into the School in the Cloud, a learning lab where children can explore and learn from each other by tapping into online resources.

TED Prize 2013 winner Prof Mitra was Chief Scientist at NIIT when he set up the first ‘hole in the wall’ 15 years ago. The freely accessible computer was an instant hit with groups of Indian street children, who learnt to use the computer and Internet by themselves.

In recent years this idea has rapidly gathered pace, evolving into dozens of Self-Organised Learning Environments (SOLEs) where children search for answers to ‘big’ questions. It has also inspired Self Organised Mediation Environments (SOMEs) – better known as the Granny Cloud – where children interact with online ‘grannies’ to engage in a wide range of informal activities.

Explaining his idea for the School in the Cloud, Professor Mitra said it would bring together all of the research to date, linking the SOLEs and the Granny Cloud to create something that was a bit different from both of these components. “We already know that reading comprehension is likely to improve in the children taking part in these activities but we do not know what else might happen in the process,” he explains. “What we do know is that order emerges out of this creative chaos.

“In India, we will be looking at two things – whether the children can learn to read and also search the Internet accurately by themselves. If they can do this, then it’s the end of schooling as we know it.”

The Kalkaji facility, which is being officially opened on 4 February 2014, is the first of five new SOLES to open in India and has been described as ‘undoubtedly a doorway to 21st century learning skills which should be introduced in all school in the near future’, by staff at the school.

There has been a small-scale experimental SOLE operating on this site for the past few years, set up thanks to a donation from London-based entrepreneur Richard Alberg, who heard Prof Mitra speak at the Stone Club in 2011 and was inspired to help fund his research. Spanning from the hub near Calcutta to the remotest site five hours away in West Bengal, what all the new SOLE locations share is a lack of educational opportunities for the children living there, coupled with a drive and determination from those communities to turn that around.

The primary aim is to improve children’s reading comprehension and search skills and develop their confidence.

“Working in small groups, children can competently search for answers to ‘big questions’, drawing rational, logical conclusions,” explains Dr SuneetaKulkarni, research director for the School in the Cloud project.“This is far ahead of what is expected of them in their school curriculum and a kind of learning activated by questions, not answers.

“It’s wonderful to be at this point where so many people believe in this project and we finally have the capacity and resources to take it forward on a larger scale.”

Background to the ‘Schools in the Cloud’

This project builds upon the successful Granny Cloud, which was set up in 2009 after a plea for retired teachers in the UK to come forward who were willing to interact with children in India via Skype. They are not all ‘grannies’ and in this context the term is actually becoming less tied to gender or age as it is seen by many as a ‘badge of honour’!

What makes this work is the universal ‘grandmother’ approach, where children get to interact with a person who is encouraging and appreciates their efforts, and in doing so enables them to learn what they need and also find out more about interests them.

The need for the Granny Cloud became apparent during the preliminary experiences in the SOLEs (self organised learning environments). The SOLEs were originally initiated to provide educational support for children in remote, disadvantaged settings in rural and urban areas in India.

The SOLE approach appealed to many educators world-wide and is now used by many teachers and schools in their own classrooms. The School in the Cloud joins these two components together and will bring in the Grannies who will use the SOLE approach in these settings.

This bigger project has been made possible with the help of the $1m TED Prize. It involves the creation of the School in the Cloud ‘learning labs’ in some of the most remote and deprived areas of India. Children will be able to drop in to use the Internet for learning, and also benefit from regular face-to-face online Skype sessions.

Microsoft, Made by Many and IDEO are among those supporting Professor Mitra and Newcastle University to create a global network and toolset to share the School in the Cloud approach with children and educators across the globe.