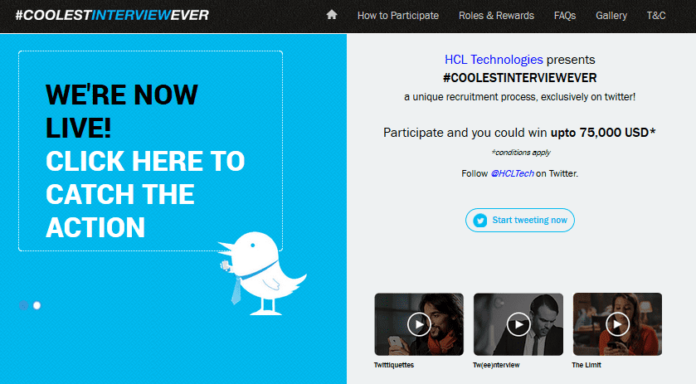 I gave my first interview for a social media job on twitter in 2007 and it was way ahead of its time. Well it was not an actual interview but something like a first round of interview. Eventually, I was called for a full-fledged interview and then hired on the spot. 7 years later, HCL Technologies is on a mission to revolutionize the hiring process. The Indian IT giant has launched the World’s First Twitter Recruitment Campaign #CoolestInterviewEver. The campaign, which began last week, will have HCL conducting a series of interviews exclusively over twitter, offering the winning candidate an opportunity to work on a year long strategic project with the company’s top management.

The #CoolestInterviewEver has the coolest job profiles ever:

Each of the roles are accompanied by expert mentors from the particular field. The winner can choose any field of their choice. In addition to this work experience, the winner will also receive up to USD 75,000! (USD 25,000 as prize money and USD 50,000 as the yearly compensation).

The campaign is powered by a microsite, that has enlisted the steps to participate, the roles & rewards, the FAQs and the Terms & Conditions of the contest.

HCL Technologies has been bracing its social community a month in advance with the first social updates made in January this year. The company’s Facebook and Twitter pages began sharing about the unique recruitment process that is soon to start on Twitter. The content that followed later has been interesting. The Twitter page has been gearing up users with the help of visuals and more info about the contest.

HCL also gave cool tips to its potential applicants on the best strategy to adopt for the #CoolestInterviewEver. Shared below is the ‘Twittiquettes’ video with the five cool tips for the interview. More cool videos have been featured on the Gallery at the website.

For additional information about this campaign, please visit www.coolestinterviewever.com. To participate in the “Coolest Interview Ever”, follow@hcltech on Twitter and tweet answers to the questions asked.