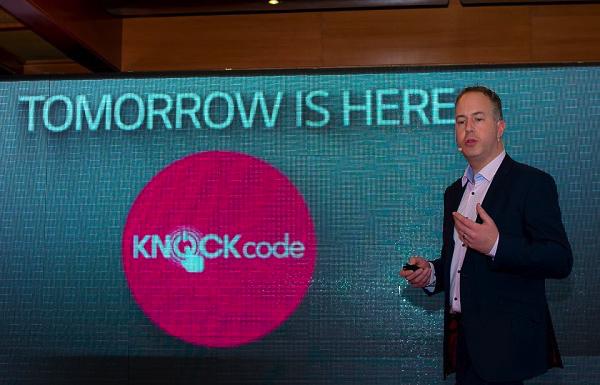 Innovation is, once again, driving the evolution of technology at LG. LG’s latest technological transformation is the Knock Code, its ground breaking feature that is a perfect match to today’s smartphone generation. The Knock Code empowers consumers with security and convenience. Set to be available on a range of LG mobile devices and backed by a patent, LG is ready to challenge its competition with this unique unlocking system.

Security is becoming a top priority for businesses and individuals across the world and LG’s introduction of the Knock Code is an essential change. The Knock Code offers greater security to consumers on their smartphones as its pattern is entered on a blank screen using two to eight taps, allowing for up to 80,000 possible security combinations. The device screen shows no detectable outline of the pattern and so the code is virtually impossible to duplicate. Extremely functional and practical, the Knock Code™ is the most convenient smartphone unlocking system available. Users can enter the home screen with just a few taps on any part of the display, making single handed entry effortless. This premium UX feature will be available on all LG key mobile devices, making a strong case for the ultimate unlocking system. With the upgraded G2 and L-Series, LG has introduced the ability to tap twice on the display to wake the phone. Post the launch of its Knock-On feature, this pattern-unlock mechanism is a great continuation. Unlocking a mobile device without picking it up is a great touch idea which is safe and convenient.

Having analyzed user habits for over six years, LG has registered more than ten patents on the Knock Code technology and is endeavoring to own these patents soon. Post the unveiling of the Knock Code on the G2 and L- Series of mobile phones, it will soon be seen as a regular feature on all its future devices from hereon. Compared to other competitors, the Knock Code is much more responsive than bio recognition systems, which are susceptible to variations in user environments. In comparison to a fingerprint scanner, the Knock Code does not have the probability of replication or exposure as there is no visual hint to the code. The ease of use of the Knock Code is defined by the fact that it works on the entire screen and its recognition rate is consistent. The Knock Code also elicits an emotional response from the user as he/she imbibes the tapping habit.

With the utilization of the Knock Code, LG aims to define its smartphone unlocking system and lead the way in the smartphone market. The Knock Code is intuitive and offers maximum security without unnecessary risks. Privacy protection is a great concern for smart device users in the digital age. LG’s unconventional algorithm and patented technology will provide user convenience and unmatched security constantly. The Knock Code is a forward thinking and out of the box idea, that will be a game changer in the future for the Indian mobile industry.