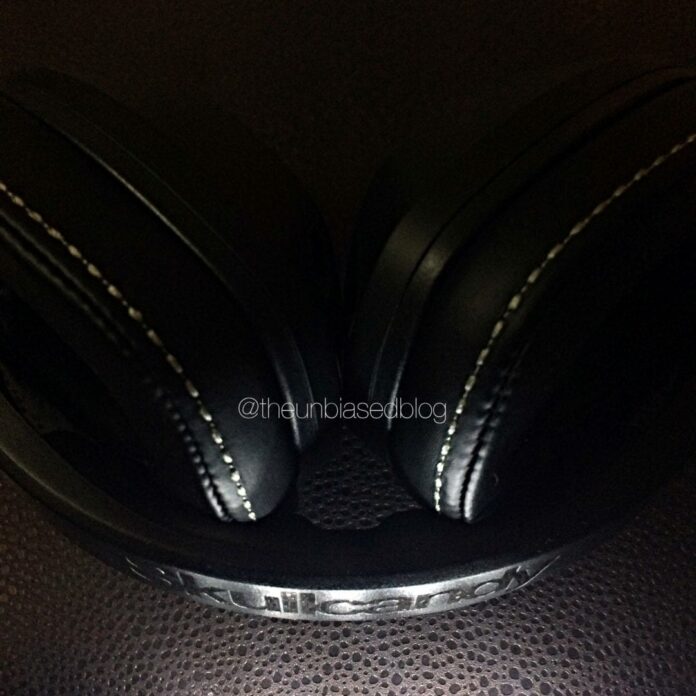 Skullcandy brings the boom with the Crusher headphones. The company’s Sensation55 driver technology, which causes the cans to literally vibrate, it feels like you’re walking around with a large subwoofer on your head. But the skull rattling serves a greater purpose, adding even more oomph to an already deep bass signature. Used with a subtle touch, the bass slider brings plenty of deep bass—and a nice balance in the high-mids and highs. Combine that with the removable cable, which has an inline remote and microphone for mobile devices, and the Crusher is a winner. The Crusher’s glossy plastic contour comes in three color options—white, red, or black. The earcups are well-padded with plush black pads, and the underside of the headband has a sufficient amount of cushion, though it’s not quite as plush as the ear pads. It looks a tad cheap at first glance, but Skullcandy classes up the presentation with small flourishes, such as tiny decorative skulls and fancy stitching. Like many headphones on the market, the Crushers’ earcups fold inward, creating a compact shape that’s easier to toss into a bag.

The matte white material from the headband extends down to the earcups, which are made of a glossy white plastic. A small metallic skull is located at each end of the headband where it connects to the earcup. The band is slightly articulated, which lets you twist the cups to ensure a more comfortable fit.

The ear pads are made of foam and covered by black faux leather, accented with handsome white stitching. To accommodate the amount of bass the headphones can kick out, Skullcandy outfitted the bottom part of both cups with a bass port.

Behind the right ear cushion is a battery compartment for one AA battery, which is included. We found it a bit annoying to remove a battery from the compartment, but you’ll only have to do that roughly every 40 hours of playback time,  if you playback with the bass at the maximum, ridiculously pumped-up level.

The bass slider on the right ear cup effectively acts as an on/off switch, as well. When you see the red dot on the slider appear, you’re no longer pulling power from the battery. If music is paused or the headphones are disconnected from an audio source, this also shuts off the internal amp and saves battery life. You can listen to music passively (with the slider in the off position) or without any battery in the compartment whatsoever—you just lose the ability to adjust the bass.

The included cable is removable and features an inline remote control and microphone for mobile devices. This increases the value of the Crusher, as it’s far less expensive to buy a new cable than it is to replace the whole headphone pair if the cable malfunctions over time. The large plastic remote consists of a single black button emblazoned with the company’s trademark skull. You can use the button to answer or ignore calls and play or pause music tracks. The remote works effortlessly with Android, iOS and Windows phone devices.

When we first put the crushers on the head, it took us a bit to adjust them to our liking. But, once we found a comfortable position, the headphones’ cushy synthetic-leather–wrapped padding surrounded our ears in pillowy softness. We wore the headphones non-stop for a few hours with no discomfort whatsoever. Skullcandy Crushers produce enough bass even without the bass slider moved up. But it get skull crushing with the Sensation55 driver to create “Bass you can feel.” Powered by a single AA battery, the driver technology attempts to imitate the rumble of a large subwoofer by generating vibrations to correspond with the low end of a track. A built-in amplifier adds even more oomph to your audio. Initially, the Crushers’ vibration-accompanied bass was a bit unpleasant. But that feeling soon fades away after one song; from then on, it felt like standing near a large woofer in a club — powerful and weirdly pleasant. If it’s too much for you, though, you can dial down the intensity of the rumble effect using the slider on the left ear cup. The headphones feel like they’re one of those massagers, but for the skull. Hopefully no sane person will be using these headphones with both the volume and the bass slider maxed out like we did for the testing.

For our tests, we used the headphones with our iPhone 5s and the MacBook Air. Without engaging the bass slider, the headphones offered clear highs and mids. We played songs from most of genres like Rock, Pop, Sufi, Club, Rap and even Country music. We were pleasantly surprised to find that the cans don’t overwhelm the track with copious amounts of bass. The low register is definitely tuned louder than the highs or mid-range, but the headphones don’t distort songs in favor of the low-end at higher volumes. We heard deep bass in all the genres we played. The Skullcandy Crushers apart from skull rattling bass offers phone calling with remote control making them even more value for money. At this price they are the best set of headphones you can buy. We definitely recommend the Crushers.