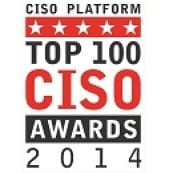 CISO Platform, the world’s first online community solely dedicated to Senior Information Security Executives, has honoured Sayed Peerzade, Vice President – Technology, Reliance Entertainment Digital at the top 100 CISO Awards 2014. The award was given for the project of security wrap implemented in the private/Hybrid cloud. The award honoured the innovation done by Reliance Entertainment Digital in forming the flexible cloud with security layer equivalent to dedicated and independent Data-centres and forming the virtual private cloud forming a perfect Hybrid cloud.

The company designed for the first time, a private cloud with same flexibility and virtual platform as any shared cloud platforms, but separately built a security wrap by going with dedicated security devices like Firewalls and with non sharable multi security devices (MTU) which successfully mitigated the DDOS and other attacks and formed a complete security layer, resulting in a cloud with very less cost and better setup than any dedicated DC.

Commenting on the honour received, Manish Agarwal, CEO, Reliance Entertainment Digital said, “It is an honour for Reliance Entertainment Digital to receive this prestigious award. Sayed’s contribution in building our private cloud is a great achievement and being awarded for innovation is a matter of pride for us. I am happy that Sayed’s dedication and efforts have been recognised by the industry.”

On receiving the award, Sayed Peerzade, Vice President – Technology, Reliance Entertainment Digital said, “I am greatly honoured with the award felicitated to me by the CISO Platform. The award contributes immensely to the successful projects carried out by Reliance Entertainment Digital. CISO Platform recognised our innovation in the cloud space and the trend has now been observed and picked by various IT market leaders. Even banks want to do it now since fear of cloud security and suspicion is gone now. I am thankful to Reliance Entertainment Digital for giving us the independence to choose technologies and way we wanted it to implement. We will continue our efforts in helping business by bringing in new technologies and reduce costs to business.”

In 2013, Sayed Peerzade was also felicitated at the 8th Annual CIO 100 Awards.