The Unbiased Blog
Home News Have you downloaded the newly redesigned ESPNFC app yet? 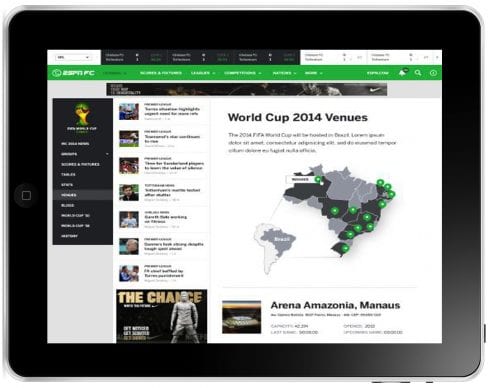 ESPN has officially unveiled the newly redesigned ESPNFC.com in advance of the 2014 FIFA World Cup.  Designed with a mobile-first approach, ESPNFC.com is fully responsive across desktop, smartphone and tablet devices featuring English language editions customized by region (U.K, U.S. and global) at launch, followed by Spanish language editions and editions for Singapore/Malaysia and Indonesia later this year.

The new ESPNFC.com also includes ever-scrolling feeds, allowing fans to easily scroll through an endless array of suggested stories, videos and more, curated by ESPNFC.com that delivers the latest and most relevant content. The site is rich in multimedia content with news, information, score and stats alongside a trove of video including studio content, commentary, interviews and more available worldwide.

At launch, due to the approach of the World Cup, ESPNFC.com will default to a special World Cup navigation, with the option for fans to toggle and switch to the standard navigation menus for access to league coverage. 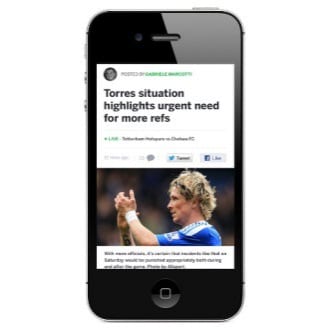 Additionally, together with Internet Explorer, ESPN has also launched the ESPN FC World Cup Essentials hub, a destination for fans to delve into the history of the beautiful game and learn more about their favorite players, teams and long-standing rivalries.  The hub is powered by Internet Explorer and will exist as part of the overall ESPN FC experience.

In-depth reporting on-site in Brazil and around the world for the new ESPNFC.com – working in conjunction with ESPN Deportes and ESPN editorial teams in UK, Argentina, Brazil and Mexico – will be delivered by:

·         Wright Thompson – senior writer for ESPN.com and ESPN The Magazine, will be blogging from various locations in Latin and South America before journeying to Rio for the final week of the World Cup

·         Gabriele Marcotti – multimedia football analyst and writer, will cover the biggest storylines during the tournament

The new ESPNFC.com’s daily multimedia original content will also include Men in Blazers hosts Roger Bennett and Michael Davies on-site in Rio during the World Cup.  In addition to their regular podcasts and MIBs blog on ESPNFC.com, Bennett and Davies will deliver original video content, including Morning Predictions – taped segments previewing the day’s matches.

Content that will be featured on ESPNFC.com in the final days leading up to the World Cup include:

·         32 Teams in 32 Days – a series of profiles of all 32 national teams competing in this year’s World Cup, will continue through Wednesday, June 11.  The remaining schedule includes:

·         #WorldCupRank – will continue to count down the top 50 players expected to compete in Brazil, based on a comprehensive poll from ESPN FC writers and editors across all regions.

·         Comprehensive Coverage of all International Friendlies (through June 7) – ESPN FC will have complete coverage for all international friendlies in the immediate build-up to the tournament, as teams make their final adjustments and tune-ups.

·         Growing Up Brazil (June 2-6) – Duarte will pen a series of first-person essays about what it was like to grow up outside of Rio as a football fan, a journey that has taken him from playing on dirt pitches to following the Brazilian national team as both a fan and journalist

·         Michael Bradley (June 5) – Drehs profiles the USA midfielder for ESPN The Magazine and ESPN FC on the relationship with his father and his journey to the U.S. Men’s National Team, including his experience in Italian Serie A and Toronto FC

·         Top 10 World Cup Moments (June 11) – ESPNFC.com will host a one-hour special on digital platforms recapping the most memorable (and most infamous) moments in World Cup history

The new and completely redeveloped ESPN FC App is now available free to download in the App Store and Google Play in time for the 2014 FIFA World Cup. Delivering comprehensive football coverage that includes live scores, news, and analysis – additionally all fans in the UK will have access to ESPN FC studio coverage and commentary video content before, during and after the tournament.

The app is developed on ESPN’s highly successful SportsCenter app (53 million downloads), the feed-based user interface provides easy access and discovery of ESPN FC’s incredible breadth and depth of content, and provide each individual fan increased control over their experience with one-touch personalization.

o    NEWS: presents the best and latest headlines of the day from ESPN’s global football coverage. A mix of breaking news, features, video and more