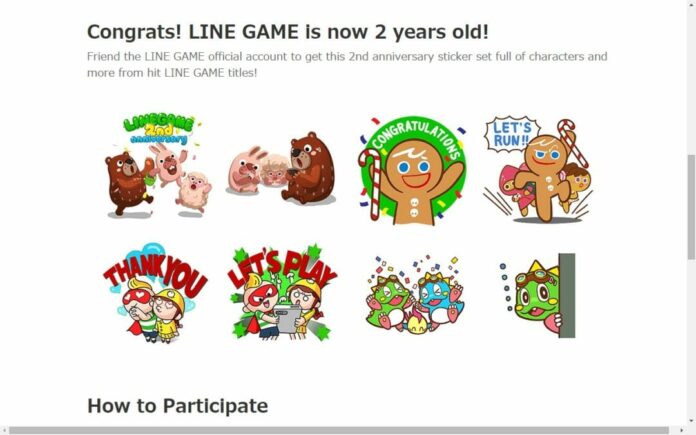 LINE, the world’s leading life platform with 170 million monthly active users globally, has announced the hosting of “LINE GAME Thanks You for 2 Years!” event on 28 games offered as part of the LINE GAME service, including LINE Pokopang, and LINE Rangers, in celebration of the 2nd anniversary since the launch of LINE GAME.

“LINE GAME Thanks You for 2 Years!” Event Exclusive Website: https://game.line.me/event/2nd-anniversary/

The “LINE GAME Thanks You for 2 Years!” event on a total of 28 titles offer users a chance to get double the EXP and items, as well as the release of 2nd anniversary limited-edition characters.

LINE GAME began service in July 2012, after which it launched 4 game titles, including the puzzle game LINE POP, on November 19, 2012. The service has continued to expand the number and genres of titles offered ever since, achieving over 470 million total downloads on November 15, approximately two years since the service began in earnest.

LINE GAME has also produced a number of hit titles, including LINE Rangers (over 23 million), and LINE Pokopang (over 38 million).

Among many game titles presented, LINE’s original character games received much love from users around the world. In particular, LINE Rangers recorded cumulative sales of USD 100 million within just 8 months of its first release.

For more exciting and dynamic experience for LINE game lovers, continuous game updates and release of new features are on its way.

“LINE GAME Thanks You for 2 Years!” Event Details

Participating users will be able to receive double the usual EXP or items during the event period on supported titles.

Limited-edition characters will appear in each title below during the event in celebration of LINE GAME’s 2nd anniversary.