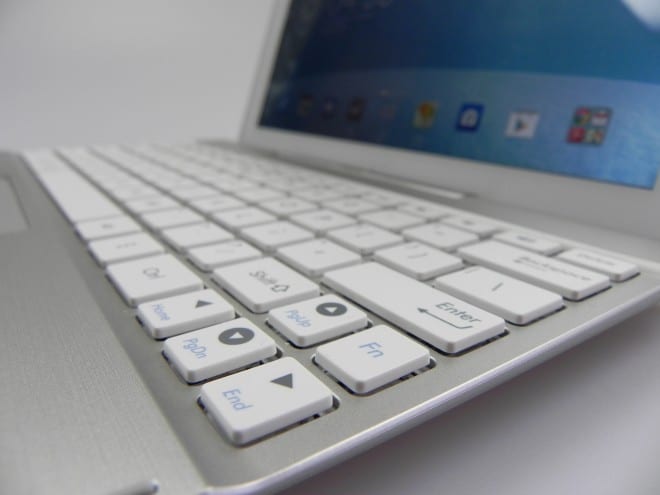 ASUS known for its hybrid devices has added another one to it large portfolio – the ASUS Transformer Pad (TF103C). Like the previous devices in the transformer series, the TF103 delivers a touch & feel of a laptop in a tablet thanks to its optional keyboard. But what has improved drastically over the previous models is the new Asus Zen user-interface which comes with useful preloaded apps, free storage and media services, and plenty of customization options.

But that’s not all Transformer Pad TF103’s biggest selling point is its competitive price. And that makes it one of the most affordable Android tablets with a keyboard in the market. But we didn’t like that the design is overwhelmingly plastic and doesn’t feel that sturdy.

Still, the Asus Transformer Pad TF103 has many features, slick user interface, and a low price tag that makes it an attractively affordable option for anyone who needs a keyboard one-the-go. Now that you have got an idea on how it fares with its specs, let’s head to the review part:

The TF103 doesn’t really have anything new to offer in the design department and lives up to its name ‘Transformer’ with its hybrid form factor of both a laptop and tablet. The standalone tablet also doesn’t offer a new design that you may fall for, it comes with a soft and smooth matte finish on the back that provides little grip support. It has thick bezels and also feels bulky in the hands.

The top edge of the Transformer Pad TF103 has the power button and microphone, and port heavy left side has the microSD card slot, Micro-USB port and the volume rocker, and the right side get the 3.5mm headphone jack. On the rear you will find dual speakers on the center of both the sides. Even though the Transformer Pad TF103 is mostly made of plastic, the device looks and feels bulky and even weighs a good 1/2 a Kg and that’s without the keyboard dock attached, even more so when the dock is attached.

Moving on to the Display, the TF103 sports a resolution of 1,280×800-pixel on its 10.1-inch screen. Which is nowhere near to its sharp retina level crisp display competition, but then again it has no competition as no other top of the line manufacturer offers hybrid design for their tablets.

Without losing track let’s get back to the Display, Watching HD movies is good enough, and its range of color is decent too. Though the lack of ambient light sensor means you have to manually adjust the brightness settings when switching place with different light settings.

It goes without a say that the keyboard is the Asus Transformer Pad TF103’s selling point, the addition that seems to blur the lines between tablet and a laptop. And the fact that it goes beyond that and does a lot more. The keyboard is spacious with plenty of travel on the chiclet style keys, which makes proper typing a possibility, something that no tablet can offer without a wireless keyboard or keyboard case attached.

I found the touchpad response to frequently lag and the default settings caused me to frustratingly and unintentionally return to the previous screen. There are a few customization options to change this, but nothing as robust as a laptop’s touchpad. I personally preferred using the touchscreen to navigate instead.

For capturing needs it has a 0.3-megapixel front-facing camera and a rear 5-megapixel camera both produce underwhelming photos.

We have always been fan of the Asus Zen UI and how it has evolved with time. And the Asus Transformer TF103 is no execption, it comes pre-loaded with apps that help you fine-tune your tablet to your needs and offer a few cool perks. For example, the Splendid app allows you to calibrate the colors of the screen easily, the Power Saver app is a robust battery-saving feature, and the AudioWizard tool is essential for optimizing audio quality when listening to music or watching a movie. The pre-loaded selection of apps takes up a little over 4GB of the supplied storage but is not as bad what competition force feeds as bloatware.

All the fundamentals are already installed and the tablet is good to go from the word go!

The benchmark of the TF103 don’t disappoint at all as it, in 3DMark we got 14063 points with the ASUS Transformer Pad TF103C, putting this model on par with the score of the iPad Air. In GeekBench 3 we achieved 769 points in the single core test and 2344 in the multi core, once again not very far from the latest iPads.  In real scenarios too, the hybrid offers great use both indoors and outdoors.  We tested it outdoors with Google Maps for directions and it took just a few seconds to identify its location, and then kept a track of the movements. Though the screen itself is slightly reflective in bright light, but there was never a time that it was unreadable even in direct sunlight. For indoors we tried a few games large games, and their subsequent levels. It take some time to load, but they run smooth once launched. The gaming experience could have been a lot better if it was a bit lighter to hold as playing a movement intensive activity or a simple mobile game, the heavy weight of the slate takes its toll on your hands and wrists after a while. Streaming movies was another area in which the TF103 impressed, playing smoothly, with sharp pictures and bright, vivid colours. Even though the screen was not as sharp as a FullHD screen, it was bright and clear enough to enjoy streamed movies on. And it also had no problem casting movies to our chromecast without any lag.

Like most other tablets, performance slows down if downloading big files or many files at once, as well as if many RAM-hogging apps are open in the background. And the heavy apps loaded a little quicker than large games, they also ran smoothly once up and running. All the wait it carries can be substituted with the battery life it offers after one charge. As a stand alone tablet, the TF103 averaged 8 hours of battery life. This is definitely a tablet for the home and the odd day trip.

The Transformer TF103 packs all the abilities of Android, with Asus’ useful Zen interface, and a keyboard dock in a compact package. As we mentioned earlier that the tablet hybrids aren’t in abundance, hence the Transformer Pad TF103 fills the void cheap netbooks have left. You can really ignore its shortcomings like the bulk and a non-HD screen thanks to its competitive price. If your needs can be met with a simple keyboard and basic functionality, the Asus Transformer Pad TF103 is a best buy.

And if by any change you want a Windows powered machine then the Transformer Book T100 is worth paying extra for. It’s essentially the same device as the Transformer Pad TF103C, but it has four times the storage (64GB), twice the RAM (2GB), and runs Windows 8.1.