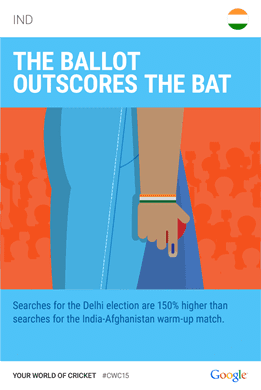 Cricket fans rejoice: the Cricket World Cup is here again! Indian fans are keenly following the team’s attempts to bring the cup back home, starting with their first match against arch-rivals Pakistan, while red-hot Australia and New Zealand will be keen to exploit home turf advantage. Keeping up with the excitement, Google has lined up a bunch of fun experiences for fans to join the party with the largest community of cricket fans from around the world.

Scores faster than Lee or Akhtar Over the next two months and 49 matches, a simple Google search for [cricket] will be the ready re-source for the latest scores and team schedules. Google has partnered with Star Sports, and fans in India will be able to see pre-game videos, in-game highlights, and post-match recaps for the match’s most exciting moments, right from within the search results. These features will also trigger in Hindi if one search for [क्रिकेट]. Rest assured that fans can stay tuned to the action anytime, anywhere.

In addition, fans can stay updated on their favourite teams in the Google App with Now cards — without even having to search. Fans just need to download the ESPN Cricinfo app onto their phone, and they will start seeing Cricinfo’s Now cards pop up in the Google app.

Millions of fans will be searching on Google for noteworthy moments of the tournament, be it be the Duckworth-Lewis method or Virat Kohli’s new hairstyle. Fans now can be a part of the conversation about what other cricket fans are buzzing about with Google Trends on +Google India throughout the tournament.

Even if you can’t watch the games live, you can still show your support by painting your face like a true cricket fan— without ever getting your hands dirty. Take a photo of yourself and of up to four friends who’d like their faces painted and upload it to Google+ with hashtag #PaintIndia (see details at g.co/CricketFacePaint). Refresh the page to see the effect!

Not just this, there are plans for special Doodles during the tournament on the Google India homepage, as well as Hangouts on Air with cricketers and commentators. So there’s a lot for the fans to have fun and explore during the World Cup.