According to our latest research from Market Monitor program for Q4 2014 (Oct-Dec), India, Indonesia and Bangladesh total mobile phone shipments stood at 89 Mn as smartphone demand skyrocketed and the total smartphone shipments contributed to more than a third of all mobile phones shipped during the quarter. These three markets combined offers an opportunity for mobile phone industry players looking to grow beyond the saturating China mobile phone market.

“Smartphone growth in these regions touches almost all the price segments with regional brands being prominent in the entry level smartphone segment. Apart from this we have seen Chinese vendors entering these geographies for the first time in CY 2014 and enjoyed a significant success rate. However it will be important to keep an eye on online only players on how they capture the smartphone growth in rural areas in these regions” says Tina Lu Sr. Consultant at Counterpoint research

“While the vendors looking to expand their smartphone strategy beyond China, it is interesting to note that domestic brands occupy strong position in these three markets by capturing a share of 62%, 52% and 50% in Bangladesh, India and Indonesia respectively. In such a scenario a new vendor entering these geographies must play on the strength of regional brands which primarily is their distribution reach and price competitiveness” says Tarun Pathak Sr. Analyst at Counterpoint research 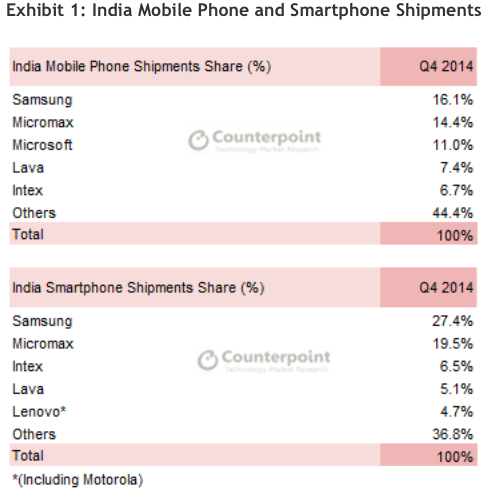 Following are the key findings of the competitive environment in India:

Feature Phone to Smart Phone migration trend is clearly visible. Smart Phones formed a healthy 35% of the overall mobile business in Q4 2014, which is up by 13% from a year ago i.e. Q4 2013.

“Smart Phone vendors are quick in gauging the consumer demand for 4G handsets. In percentage terms, 4G handsets are still in single digit. But vendors who are not yet ready with the 4G portfolio are likely to miss the next wave of Smart Phone growth story.” Says Karan Thakkar, Senior Market Analyst, IDC India.

A quick look at the overall vendor share shows the strong presence vendors have in the feature phone market to make it in the top five list at an overall level.

IDC anticipates a sluggish Q1 2015. However few global vendors which were in the inventory correction phase until now are likely to exhibit big shipment numbers starting Q1.

“Operators are gearing up for 4G network rollout. For vendors and ecosystem partners, greater emphasis on 4G enabled handsets at competitive price points will be the order of the day. End-users’ desire to upgrade and keeping abreast with the latest technology, will continue to drive a strong growth for the Smart Phone market in CY 2015.” Says Kiran Kumar, Research Manager, Client Devices, IDC India.

And the reason Samsung has been the leader and still leads the overall mobile phone and smartphone market is because of its continued innovation and also being one of the most trusted brand. Not only do the customers prefer a brand they recognise but also a brand that offers them after sales service.