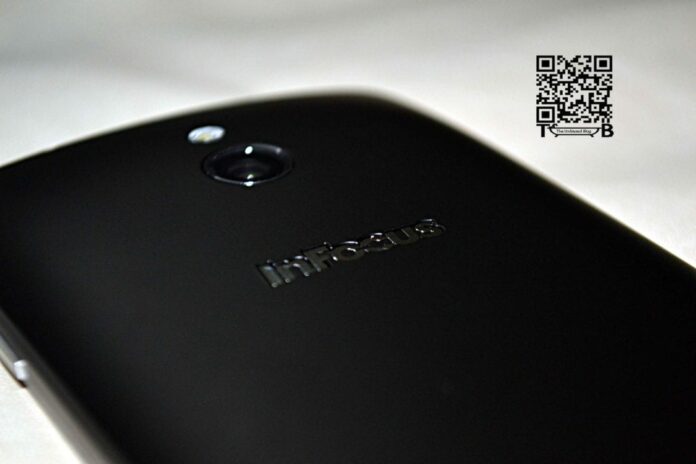 Before, I start the review of the InFocus M2 3G, I’d like to throw some light on the company – InFocus. It’s very important for user to know and relate to the brand before they can make a decision. So here you go, InFocus Corporation is a privately owned American company based in the state of Oregon. Founded in 1986, the company develops, manufactures, and distributes DLP and LCD projectors and accessories as well as large-format touch displays, software, tablets and smartphones. InFocus also offers video calling services.

So now that you are well aware of the company, let’s head to the smartphone – M2 3G. But before we start with the review, let’s have a look at the specs of the device:

The InFocus comes with in a white and silver box with minimalistic branding on the front and sides. And all the details, specifications, pricing etc on the back. Inside the box you will find the device, a charger, in-ear headset, USB data cable and the usual documents all tucked in together under the device.

At the first look you might confuse it with the Motorola’s out there. The hard plastic back with a similarly bent curve makes you believe its the Moto E or Moto G. If you cover the branding or do a blindfold test many would says its a Motorola. The front of the device has no branding and no marking except the capacitive touch buttons at the bottom of the screen on the bezel.
The handset sports a 4.2 inch LTPS screen with WXGA resolution but there is a lot of wastage of screen to body ratio. The thick bezel on the top and bottom could have easily allowed more screen estate. The only difference you would spot on the front of the device is a white circled soft flash next to front camera, which you will not find on any of the devices priced so low. Though we wish the white circled front flash was not so in the face and didn’t look that cheap. Apart from that the usual hidden sensors next to the speaker grille and a notification LED.

Moving to the back of the device, you would notice the branding right in the middle with the camera and flash on top of it. The rear cover has a matte finish which prevent fingerprints and smudges and towards the bottom of it you will see the speaker grille. The rear cover is removable from the side, once remove you see the two SIM card slots, a microSD card slot, an irremovable 2010 mAh battery.

The sides of the device is very well planned out with buttons or ports on each side. On the top, sits the 3.5mm jack with a noise-cancellation mic; on the left is protruding silver volume rocker; on the right is the sleep/wake/power button and on the bottom is the micro-usb port and a mic.

All in all, its great phone to hold thanks to its curved back and for people who don’t like huge phablets, this a much recommended device. That’s the design bit, testing out the display of  the InFocus M2 which sports a 4.2 inch screen with 1280 x 768 pixels resolution at 355ppi. In fact, I was very surprised by the quality it offers at this price. The colour reproduction is good and so are the viewing angles and the touch. And that’s not all, the device also offers a lot of customization options for the display – Screen Mode, Colour Temperature and BlueLight Filter etc. But we advise you all to be careful whilst handling the M2 as it doesn’t seem to have Gorilla Screen Protection or at least doesn’t says so.

The M2 runs on MediaTek MT6582 1.3GHz Cortex A7 quad core chipset with 1GB RAM(On the first boot you will get 440 MB Free RAM) , Mali 400 MP GPU and 8GB Rom (User available 5.1GB space for apps/ personal storage) which can be expandable up to 64GB via microSD card slot. Apps will get installed on the internal storage, however you can move some apps to external card – you will find the option in settings –> app – look for the app, tap and if it is possible to move, the ‘move to SD card button’ will be active and OTG is supported. We don’t have any complain about the overall performance of the device. The device weighs 145g and has dimensions of – 5.3X2.5X0.4 inches. The SAR value mentioned on the device is 1.356 W/Kg head and 1.516 W/Kg Body. The device is available in two colour options – Black and White. Now let’s review the Software (UI/UX) of the device.

The M2 3G comes with Android 4.2.2 pre-installed with two optional overlays –  EZ Launcher and Launcher+. By default the device has Launcher+ enabled which is a mix of stock android features + iOS iconography. If a users want to rather simpler UI, then he/she can go into Settings->Home and select the EZ Launcher. When enabled, the EZ launcher creates huge tiles (Windows Phone-esque) for simpler user interface. Users have the ability to alter the placements and add more apps in it.

Apart from the UI, the InFocus M2 comes with goodies like SugarSync and Dropbox integration + free storage options for logging in/signing up.

There are a lot of pre-installed apps to enhance the device, some of them are:

Let me be very clear, the price of the device doesn’t deter its performance at all. In fact, you can feel the swiftness of the device thanks to two different UI options EZ Launcher and Launcher+. Here is how it fared it in benchmark tests:

According to benchmark scores, the device is at par with its immediate competition – the Lenovo A6000, Xiaomi Redmi 1S and Moto E. As far as daily usage on the device is concerned, the deice is smooth and you will have no complaints. But if you move on the heavy usage like gaming or streaming HD content to your Chromecast then you will feel a lag here and there. Now let’s discuss the crucial factor of any smart device – The Battery standby.

The device is powered by a 2,010 mAh battery which withstands  a full working day with mixed usage and a bit of gaming.

With the M2, InFocus has got what the users in India desire the most – a great camera both rear and front. In fact, the M2 sports a 8MP camera with flash on both the rear and front, making it an absolute delight for selfie lovers. The image quality is good and colour are nearly accurate with or without HDR. I also noticed that the camera auto focused quiet fast but there was a delay in the capture, which we fixed by choosing an option called live camera. Well that’s just one option, the camera comes with many options like:

The front camera took really good selfies also used skin smoothening and all thanks to beautify. I’ll let the photo samples share the rest of the story about Selfies, Macros and HDR capture.

Well thats not all, there is a special pre-installed app called ‘MeituPic’ which we mentioned earlier in the review. Now this app can do much more than your usual beautify or image processing features/apps.

With MeituPic a user can: Beauty Retouch
>> Auto retouch: Auto skin enhancement, eyes brightening and face-lift in one fast tap!
>> Smooth and whiten skin: Remove wrinkles, optimize skin tones and give your skin a perfect look.
>> Remove blemishes: Tap to remove acne, blemishes or any other skin imperfections.
>> Slimming: Face-lift or weight-lose with the touch of your fingers. Get the perfect body shape that you always wanted.
>> Remove dark circles and bags under the eyes.
>> Enhance eyes: Brighten and enlarge your eyes to look amazingly attractive!
>>Taller: instantly gives you longer and slimmer legs!

I gotta say we are might impressed with the device thanks to the value for money it offers. Only thing that InFocus needs to work on is creating some brand recognition and providing after sales service to its customers. If they get that right in the first few months then there is no looking back.

And if you are convinced already then you can buy the InFocus M2 is exclusively from Snapdeal for Rs. 4,999. Lastly, we look forward to the Android Lollipop update for the InFocus M2 3G and also newer models in this year.