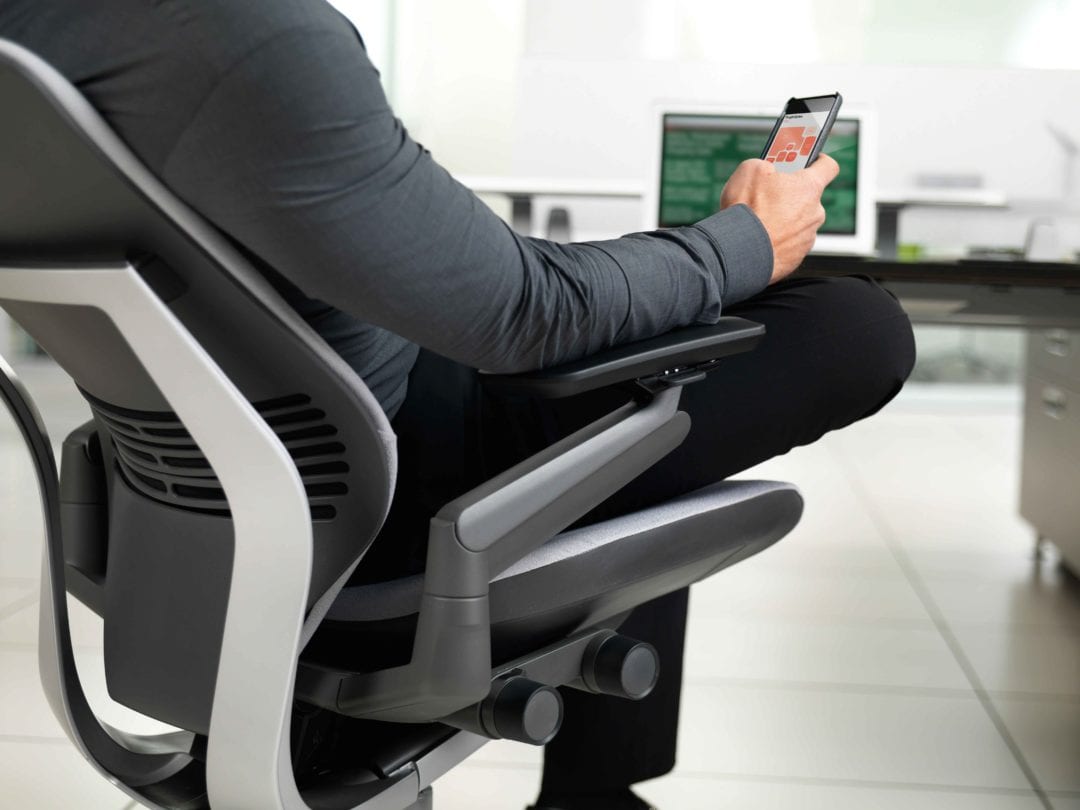 “We love our technology – it’s become a ubiquitous extension of ourselves,” states James Ludwig, Vice President of Global Design for Steelcase. “The user interface is intuitive and responds to various gestures. But what about gesture recognition for the human body? The way technology impacts our bodies as we work has been largely ignored.”

Steelcase recently conducted a global study in 11 countries including emerging markets like China observing over 2000 people in a wide range of environments and postures. The study reveals how new technologies and new workplace behaviors have led to nine new postures — not supported by current office chairs — which frequently cause pain and long-term injuries, disrupting concentration and creativity. Gesture is designed in response to Steelcase’s global research about changing postures in the workplace.

“Tablets were introduced just three years ago. But many people are using chairs that were designed well before these new devices became pervasive at work. Back then, chairs were created to help people hold one pose in front of a computer all day. Now we know that people need to move and change positions regularly, especially as they engage with new technologies. We observed people in pain — they need a sitting experience designed for the ways we work today,” continued Ludwig.

Gesture: A Revolution in Sitting Experience for Workplaces

Steelcase researchers studied how the physiology of work has changed, how the human body interacts with new technologies and how it transitions as people shift from one device to another. Researchers noted a more extreme range of human sizes around the world, which impacts postures. The company also studied the changing sociology of work and how people rapidly shift between individual, focused tasks and creative collaboration. Each new activity caused people to change postures.

“Today’s workers are driven by their vision – small technologies have a gravitational force to pull the body down,” explained Carol Stuart Buttle, CPE, Principal at Stuart-Buttle Ergonomics. “If the chair doesn’t move with the user, people slouch to make up for it, or flop on the desk to overcompensate for what is uncomfortable. Workers today are moving from bad posture, to bad posture, to bad posture. Gesture helps you be where you need to be – it helps workers find support in smarter ways so they can use their devices in safer ways.”

As part of its global posture study, Steelcase identified nine new postures based entirely on the result of new technologies. For example:

Steelcase has established 3 Work Life Centres in India – the company’s flagship showrooms in New Delhi, Bangalore and Hyderabad.  Steelcase will be soon inaugurating its 4thWorklife Centre in Mumbai. Earlier in April 2013, the company started its first manufacturing facility in India spread across 50,000 sqft at Chakkan, Pune.