The Unbiased Blog
Home News ‘The World remade’ is the theme of the 14th edition of India...

India Today Conclave, where the best minds across the globe converge to brainstorm over the future of mankind, is back. And like previous years, the India Today Group’s signature event, to be held in the Capital on March 13 and March 14, is all set to create history.

This year the untold story behind Indian cricket’s most glorious journey will be revealed by the ‘god of cricket’ himself. In what is going to be his first intimate public interaction after retirement, legendary cricketer ‘the world’s greatest run machine (Sachin Tendulkar)’, will deliver the keynote address at the Conclave and will take questions on his life on and off the field. Titled “Hero of Our Times: Life Lessons from The Legend”, the session will kickstart the festival of ideas and arguments.

Modern cricket’s best batsman, Tendulkar retired from the game in 2013. Last year, he co-wrote his autobiography, Playing It My Way, with India Today Group’s consulting editor Boria Majumdar. The book smashed several sales records, befitting a legend who carried the hopes of over a billion cricket fans on his shoulders for more than two decades since he made his debut at the age of 16 in 1989.

The theme of this year’s conclave is ‘The World Remade’. As the challenge of Islamic State grows, America disengages from Afghanistan, Russia flexes its muscles in a world with a shifting power axis, Germany continues its rise in Europe, and the world copes with issues of gender, public health and joblessness, the world is clearly staring uncertainty in its face. Back home, the NDA government heads towards a year in office after an epochal mandate. The Conclave has once again assembled the brightest thought leaders with their ideas, arguments and experiences that allows us to renew, reinvent and re-imagine. 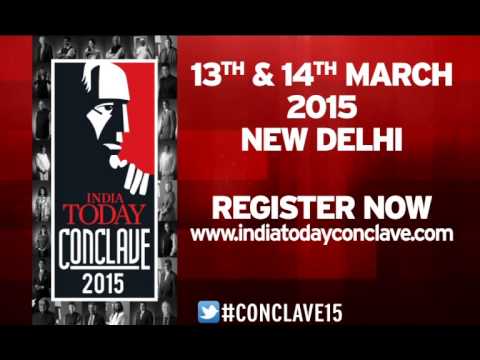 Speaking on the occasion, Conclave Director Ms. Kalli Purie, said, “India Today Conclave has always been a collection of the most interesting people of our time. In the 14th edition we add to it curated sensory experiences designed to make you challenge accepted convention. Performances created by talented superstars, pioneers and innovators from around the world specially for India’s original Conclave to leave you spell bound”.

Come meet the India’s busiest two days at the India Today Conclave 2015 with the world’s best sharing one stage.

Apart from them there are key politicians and members of parliament like Derek O’Brien, Bhagwant Mann and Jyotiraditya Scindia ,economist Arvind Subramanian and former Chief Of the Army Staff General Bikram Singh and many more celebrity speakers all at the India Today conclave, the starting point of tomorrow.