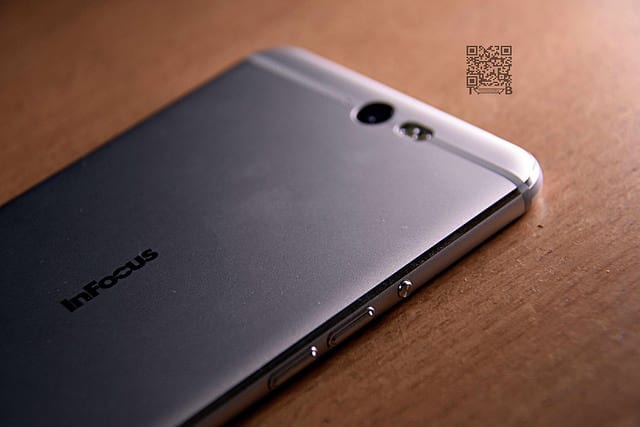 I won’t deny that I’m a fan of InFocus smartphones, the company is always trying to do something different and offer great products to consumers. Be it the InFocus M2 or the other devices launched by the company, all have distinct design and features. Living up to that, the company today introduced the M812 smartphone in India for INR 19,999 i.e. around US$300.

The InFocus M812 comes with an aluminum unibody featuring a 5.5″ 1080p IPS display with Gorilla Glass 3. Under the hood it has a Snapdragon 801 chipset coupled with 3GB RAM. Internal storage is 16GB and can be further expanded using a microSD card.

The M812 gets a 13MP Rear Camera with a f/1.8 aperture and a dual-tone flash. The Selfie/Front camera is a wide angle 8MP camera. The device comes with Android 5.0 Lollipop with an overlay of homegrown InLife UI on top.

For those keen about knowing the specs, here are the complete specs of the device:

Now let’s have a look at some photos of the device:

Now that you have gone through the complete specs and the photos, let’s head to the review part of the device. But before that, we would like to inform all our readers. That our review unit came without the original packaging, hence we won’t be able to share the pictures for box contents like we do in all our reviews.

First look at the device and you know it’s a 4G device thanks to in your face 4G logo on the otherwise gorgeous metal body. Or maybe it was placed there to make it look a little different from the iPhone 6 Plus. That said, I need to stress on the fact that the InFocus M812 and iPhone 6 are so similar looking that some people can actually mistake it for each other. The fact that both the devices are made by the same ODM (Original Device Manufacturer) – Foxconn, the device build quality and aesthetics match a lot. As a result the device feels extremely sturdy, very premium and one of best looking Android devices around at under 20K. 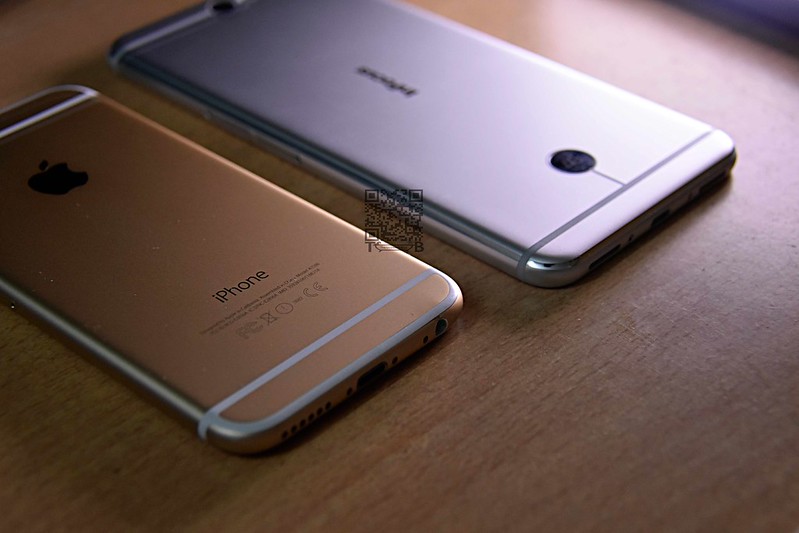 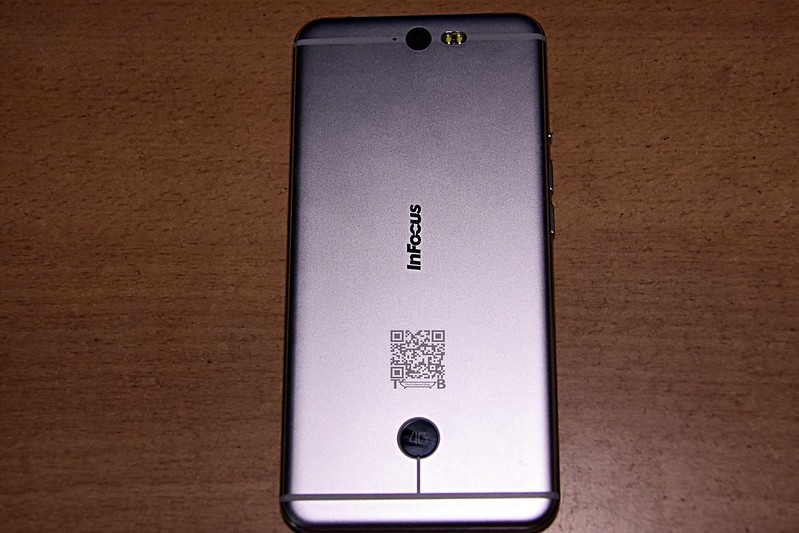 The handset sports a 5.5 inch with 1080×1920 display resolution but there is a lot of wastage of screen to body ratio. The front of the device has branding on the bottom part of the bezel where usually the Home and Navigation buttons are. The thick bezel on the top and bottom could have easily allowed more screen estate.  On the top is the 8MP wide-angle selfie camera next to the speaker grille. What’s good use of space is that the LED notification light is hidden inside the speaker grille. 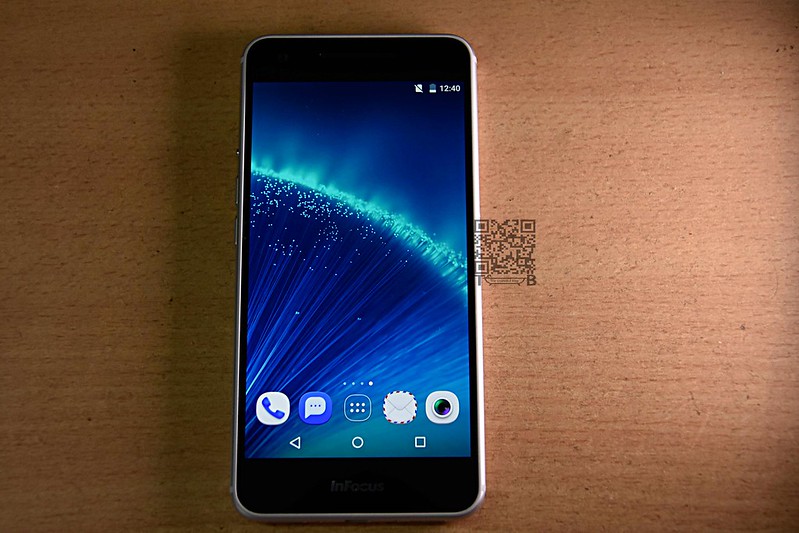 Moving on to the sides of the device, the left side get the Power or Sleep/Wake button with Volume up/down buttons. Like in most of devices you mistake with the Volume rocker and Power button, its very unlikely that will happen with this device thanks to the cylindrical power key. On the right, you have 2 slim card slots, SIM1 slot accepts a Micro-SIM and the second slot is a hybrid which will either hold a Nano-SIM or a microSD card. So if you are planning to use this device with 2 sim cards, then you will lose the second (storage) slot  and will have to settle with only 16GB. 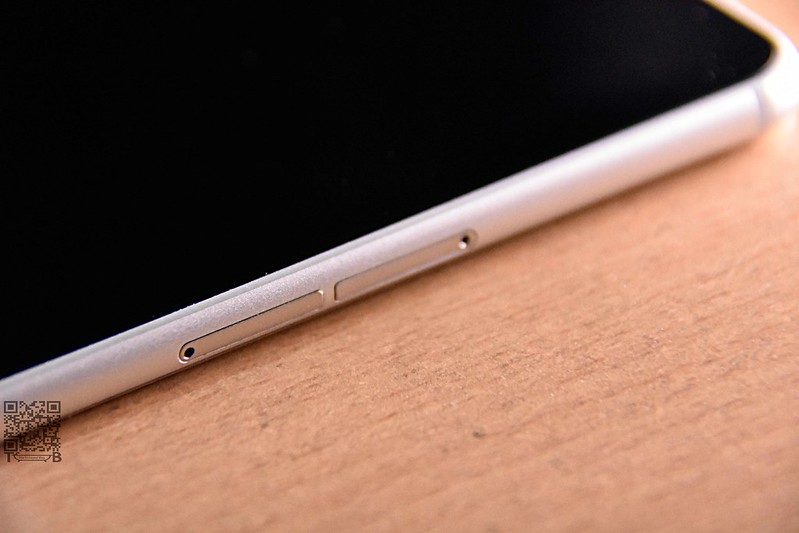 On the top you have the 3.5mm headphone socket while the Micro-USB port and speaker grille are on the bottom. On the back, you get the 13MP camera, dual-LED flash unit, the InFocus logo in the middle, and the eye-sore 4G logo at the bottom. 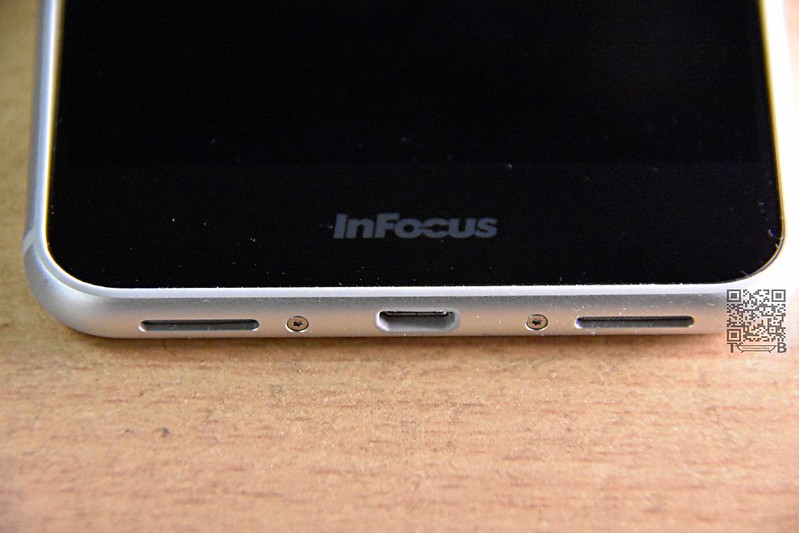 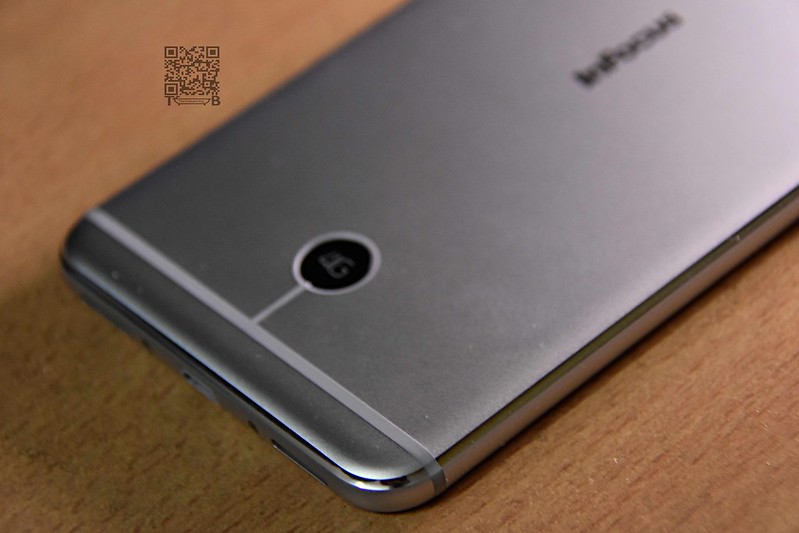 As we already mentioned that we got the device without the retail box. We can’t talk about the how is the quality of the accessories supplied but we have confirmed that you will get a headset, charger, cable and the manual in the retail box. Thanks to its premium and sturdy build quality it is a much recommended device. That’s the design bit, testing out the display of the InFocus M812 which has a 5.5 inch screen with 1080×1920 pixels resolution at 400ppi. The colour reproduction is good and so are the viewing angles and the touch. Like other InFocus smartphones, this device too offers a lot of customization options for the display – Screen Mode, Colour Temperature and BlueLight Filter etc. The M812 also has Gorilla Glass 3 protection on the display. The InFocus M812 is a treat to look at and comes with a superb build quality. The device is fairly slim at 7.38mm, but a bit on the heavier side. Also Read – InFocus M2 – The Unbiased Review

The M812 runs on 2.5GHz  quad-core Snapdragon 801 SoC, with 3GB RAM(On the first boot you will get 1.8GB Free RAM) and 16GB Rom (User available 9.8GB space for apps/ personal storage) which can be expandable up to 128GB via microSD card slot. Apps will get installed on the internal storage, however you can move some apps to external card – you will find the option in settings –> app – look for the app, tap and if it is possible to move, the ‘move to SD card button’ will be active and OTG is supported. Device has most of the sensors including a proximity sensor, an accelerometer, a compass, a magnetic sensor and a gyroscope. The overall performance of the device is really good. The device has dimensions of – 157.60 x 77.10 x 7.38 mm. Now let’s review the Software (UI/UX) of the device.

The M812 comes with Android 5.0.2 pre-installed with InLife UI 2.0 overlay and two optional launchers – EZ Launcher and Launcher+. By default the device has Launcher+ enabled which is a mix of stock android features + iOS iconography. If a users want to rather simpler UI, then he/she can go into Settings->Home and select the EZ Launcher. When enabled, the EZ launcher creates huge tiles (Windows Phone-esque) for simpler user interface. Users have the ability to alter the placements and add more apps in it. 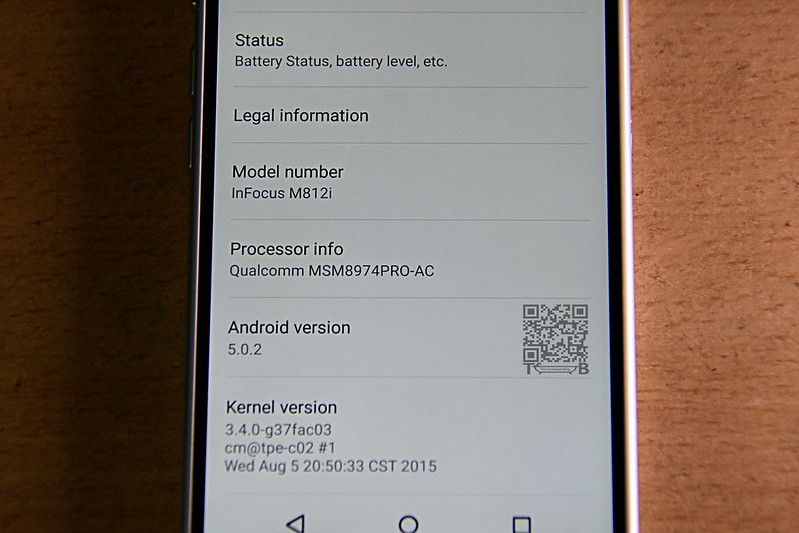 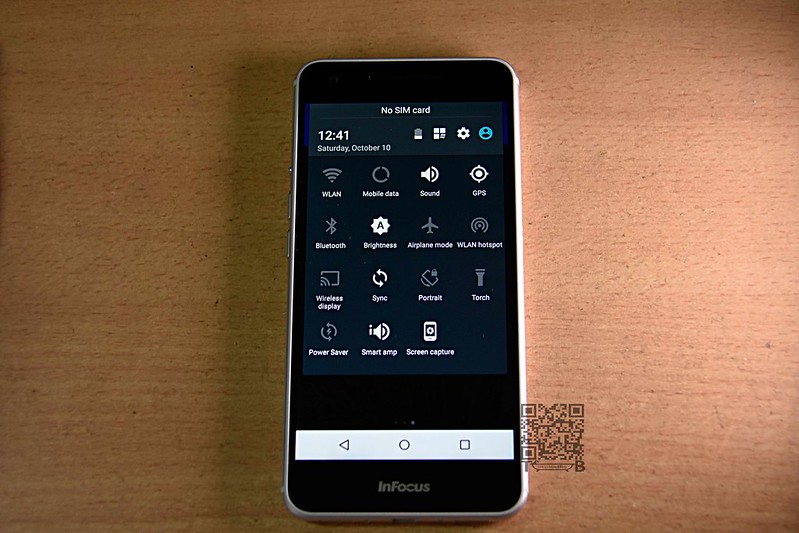 Just like iOS, a user can access the notification panel by swiping down anywhere on the homescreen. This is very useful on a 5.5-inch display. The device has pre-loaded apps but as the apps included by InFocus are useful thet cant be considered bloatware. which could help you with productivity and getting more standby time from the phone. The Backup tool lets you back up or restore data and apps, App Traffic Controls lets you set which apps can send data over 3G or Wi-Fi. Mobile Assistant lets your know how many junk files can be cleaned and which apps are hogging the most resources. Power Detective gives you an in-depth look at your battery usage statistics. Other apps include WPS Office, Safebox (to lock apps and files), the usual suite of Google apps. The interface is quite responsive and uses up around 850MB of RAM, leaving you with 1.5GB free on average. 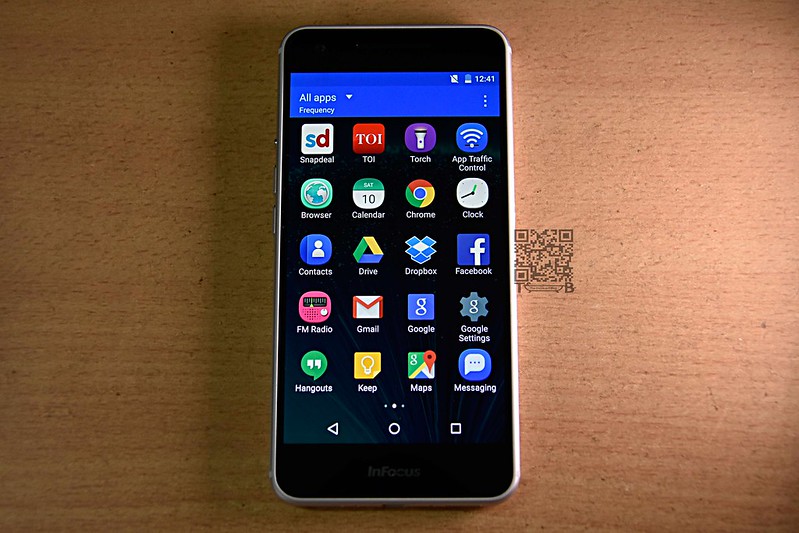 The M812 also supports motion gestures such as turning the phone over to mute a call or answering a call directly when you lift the phone to your ear.

For a sub 20K device, the InFocus M812 has a really good performance just as you’d expect from the Snapdragon 801 chip. Here are a few benchmark tests that we ran on the device:

Other very important aspect of a device its battery life and the M812 pleases us with its battery performance. The device lasted easily a day 20-30 minutes of gaming, few calls and intermittent notifications from apps like Mail, WhatsApp, Twitter, Facebook etc. In our battery test the device ran straight for 10 hours.

With regular usage the device didn’t heat up despite its all-aluminium body. But we did notice heating on the top of the device near the camera whilst gaming and running benchmark tests.

The 13MP camera on the device is decent but not as good as we would have expected from a 20K device. The camera has decent has depth of field but the zoom level is only 3x and that too gets saturated. The camera also lacks dynamic range. Like most Android smartphones you have a Mode button, which lets you change the shooting mode. Apart from the usual suspects, there is a new addition ‘Watermark’. This mode lets you add a watermark to your image with the date, time location and weather information. You can choose from 9 different styles. You can save a few $’s thanks to this mode as I had to buy an app called InstaPlace for this very purpose. 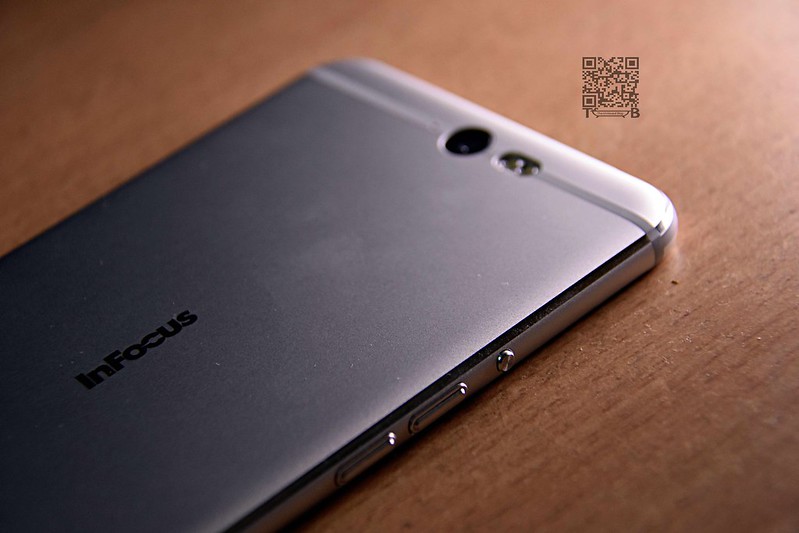 Low-light pictures are just about alright as you’d notice the noise in the background. The dual-LED flash is powerful and does light objects evenly.

The device lacks 4K recording, as per full HD Video recording is concerned it handled well. If you can settle for 480p quality videos than you can also shoot slow motion video. The front-facing 8-megapixel camera does its job of capturing detailed selfies very well.

InFocus M812 has a great build quality, battery life and performance making it a good buy. But as the competition at 20K is cut-throat perhaps a price of 15-17K would have made it a lucrative offer. What remains to be seen is how InFocus can make the brand more accepted by its customer service and brand awareness amongst consumers.