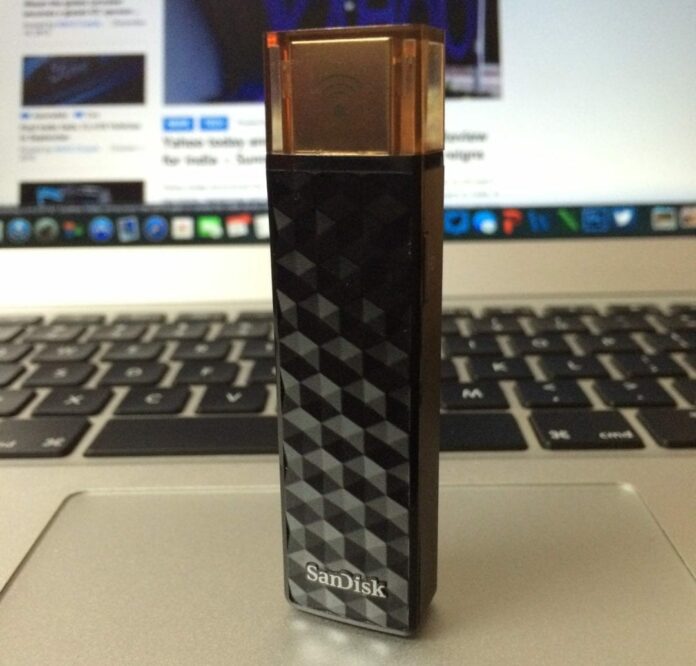 Sandisk a name synonymous with storage devices recently added another revolutionary device in their portfolio. A device that speaks strongly about SanDisk and it’s more than 5,000 patents worldwide. Yes, it’s the much raved about Sandisk Connect Wireless Stick. A device that plays many roles:

Impressed already? But before you make up your mind, here is our unbiased review of the Connect Wireless Stick.

The Connect Wireless Stick looks pretty much like a regular USB drive/stick only more stylish thanks to its geometrical patterns and texture. The device weighs 22 grams and measures 3.08 (H) x 0.82 (W) x 0.48 (D) inches. It has a very modern look and feel to it which would attract a lot of style conscious users. 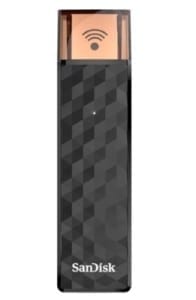 In the middle of diamond black patterns is a single LED (you won’t even notice it till it blinks) on the center of the device. The single LED denotes using colors and patterns—whether it’s on, transferring data wirelessly, low on battery, updating firmware or is low on battery.

It’s very easy to operate the Connect Wireless Stick, all you have to do is press the Power button on the right side of the device to switch it on. Once the device is powered on, it shows as a Wi-Fi device on your smartphone/tablet. But to access the content of the device, you’d have to download the Sandisk Connect Drive app. We will talk about the app and it setup in the later part of the review.

Coming back to the design of the device, it comes with a clear cap on top of the USB port to protect it from dirt and damage. The device works perfectly fine wirelessly with the cap plugged on. The only drawback in the design is the lack of cap storage place when you have to take it off for plugging into a USB port of your PC or Mac. Because of this design flaw, a user is very likely to lose the cap somewhere or the other. 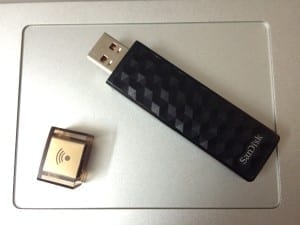 Nowadays, filling up your smartphone space is matter of few days. Specially if you have smartphones like iPhone, Nexus or the new Samsung Galaxy S6 or Note 5 that lack expandable storage. And it’s even worse if you own a smartphone with 16Gb or lesser memory. Prior to owning the Connect Wireless Stick, I was totally relying on my SanDisk iXpand Drive to clear up space on my 16GB iPhone 5s.

And, I still use it for all my offline backups of the iPhone. But as the Wireless Connect Drive allows me to access, stream, and transfer files over 802.11n Wi-Fi using to up to 3 mobile devices at once. It has become my preferred media (music & movies) storage drive. Android users still have an option of using OTG drive to transfer content but for iOS user there isn’t any easy way out there to transfer music or movies. And that’s the reason just like the SanDisk iXpand Drive, the Wireless Connect Drive is a blessing for iOS users. To transfer content from your PC or Mac, you can either connect it wirelessly or by plugging it into a computer’s USB port. The device is plug and play on both PC & Mac so it’s easier to plug in and transfer the content than connecting to the flash drive’s internal wireless network on your computer and go to a special Web address on the browser.

As the Connect Wireless Stick is meant to be used via your smartphones/tablets, that’s where the drive really excels. All you need the SanDisk Connect Drive app downloaded on your Android or iOS device. Once downloaded, simply launch the app and it takes only a few minutes to set up. Once the app setup completes, connect to the drive’s Wi-Fi network and you are good to go. If by any chance for some reason you can’t or don’t want to install the app. You can still connect it to your smartphone/tablet using the same browser method you would on your PC/Mac.

Here are some screenshots of the apps for you –

As you would have noticed the app has a very intuitive UI & UX. Once you are connected, you can move files on or off the drive and stream content from it in real time. On the homescreen you see folders you have created and you can also change the layout of the homescreen. The app also shows how much storage is remaining on the drive and also on your connected mobile device.

The Connect Wireless Stick can also be used to backup your phone/tablet’s camera roll. You can also set it to back up automatically each time the drive is connected. Coming to the performance of the drive, I used it flights; long drives and on all nighters with friends. The wireless connection was optimum as we sat in and around 100 feet. The drive stayed connected to our devices even whilst we walked up and down in the flight to use the lavatory. The battery of the device is also lasts double its charge time i.e. 4-4.5 hours after a charge of 2 hours. The Read/Write speeds of 15.8MBps/9.84MBps are on a slower side as this is not a USB 3.0 device but that’s what we hope to see in the next-gen of the SanDisk Connect Wireless Stick.

We live in the times where we do things with gestures (Hololens, Google VR, Xbox Kinect etc) and hence physically connecting devices or wires feels outdated. But most of new technology comes with a hefty price tag but surprisingly SanDisk Connect Wireless Stick is very affordable and infact the most economical and smallest private cloud server you can buy. I tested the 16GB review unit of the device, but there are 32GB, 64GB and 128GB versions also available online. So, if pocketability is key for you, SanDisk’s new Connect Wireless Stick is a must buy. What we would like to see in the next generation of the Connect Wireless Stick is USB 3.0, better battery life and a place holder for the USB cap 🙂