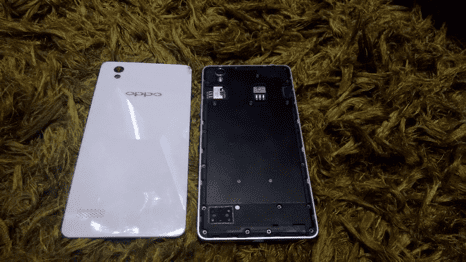 The increased competition from the Chinese Smartphone manufacturers has been an advantage for the Indian smartphone users. And to add to the competition, Oppo has released Mirror 5, a beautiful smartphone with a unique design. After the release of the slimmest phone in the world, their newest gamble is worth a look. The design of this phone is different from the others because it’s back has a 3D cut mirror kind of design which looks excellent when it shines under light. But can it deliver more than the bar that Oppo has set? Let’s Find out – Design is the USP of Mirror 5 and Oppo has definitely put some work in that area. The mirrored back from which it derives its name is the best features which looks spectacular outdoors. However, the back is slippery and can make the phone prone to damage. The speaker is placed on the bottom of the backside. The camera and lens on the top left followed by the Oppo branding in the middle. The metallic frame looks subtle. The touch sensitive buttons on the button are not lit but vibrate softly when touched. On the top you can spot the IR Blaster and using the Remote Control application you can use the Mirror to control your electronic devices. The back cover is removable, but the battery is not. Even though it is not the slimmest phone, it still feels slim and light. There is no compromise on the sturdiness of the phone as it feels solid. The phone has a large 5 inch display which has rich color. It worked well under bright sunlight as well, and I was able to read easily. The color did not change when the screen was tilted and remained bright. Even though the phone is large, one hand operations can easily be performed. The resolution of the device is just 540×960 pixels and was a disappointing spec. But the screen was clear and crisp and no pixilation was noticed unless watching a video. Mirror runs Color OS on Android 5.1.1 Lollipop. The device is highly customizable and is very responsive. Many gestures and animations are also included to enhance the experience. While there are many features that Oppo has included in the OS, it originally takes its inspiration from Stock Android. The 5 inch display fell short for the multitasking features that the phone had to offer. The 2,420 mAh battery included in Mirror 5 in non-removable. It may seem less on paper, but it is decent. The phone gave 11 – 12 hours on an average use. I was expecting a little more considering the fact that the device is 5 inches and has a very low resolution. Nonetheless, even mediocre usage gave about 6 hours of juice.

The 2GB RAM provided with the phone clocks at 1.2GHz. The quad core processor handles games without any lag. Even though it did heat a little, all the games ran fine. I started from small games like Subway Surfers & Temple Run 2 and then advanced to NOVA 2. Asphalt 8 ran well as well. Although I did saw some frame drops during GTA San Andreas.

The plastic back did heat a little while watching high resolution videos and while playing battery intensive games, but nothing so significant.

The speakers are placed on the back and a result while gaming and watching movies, I had some problems. But it provided good sound, getting distorted only when the volume is at full.

The 8-megapixel camera of Oppo Mirror 5 gave good quality shots which I was expecting, considering Oppo’s reputation for good cameras. The outdoor camera photos were better than the indoor photos. Every color has been perfectly captured by Oppo. Even though Mirror is a good smartphone there are a few things you need to consider before buying it.

If you are a photography enthusiast, I would definitely recommend this phone. The glamorous looks are also worth considering.