The Unbiased Blog
Home News Tech Vodafone Bazaar – An initiative you should know about! 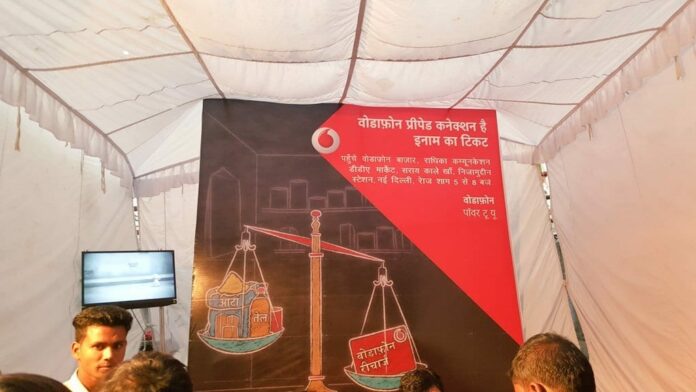 Being a Vodafone customer for more than a decade (Essar to Hutch to Vodafone), I’ve always kept myself updated with all brand activations that the company does. Though most of them like the pug (network that follows you) or ZooZoos have been really popular and everybody knows about them. But there are some interesting low-key activations by the brand that not many people are aware of and as a digital media marketer I decided to follow them.

One such brand activation that I came across last week is called ‘Vodafone Bazaar’. It’s interesting to see that when the world is moving online and trying to sell its products and services online, app only or on e-commerce. Vodafone has decided to cater the lower strata of population and address their need in a unique way. So what exactly is ‘Vodafone Bazaar’?

Simply put, Vodafone Bazaar is an offline brand activation to welcome new user base and reward the existing ones. And to make it a success, Vodafone went to grass root level for its strategy and execution. The company zeroed down on locations where they can interact with mass audience, they then set up eye-catching stalls with loudspeakers and TV’s playing Vodafone ads, they create mini Vodafone stores with laptops, digital camera, portable photo printers etc to ease and fasten the documentation process. Lastly, they create a reward mechanism wherein existing/new users get a chance to be a part of the lucky draw and get instant rewards in the form of household items like – Sugar, Flour etc.

A glimpse of how the #VodafoneBazaar operates. @VodafoneIN has been doing it in select areas all over India. pic.twitter.com/g18FEwMCr3

We spoke to the Vodafone RMA at the Vodafone Bazaar installation near Nizamuddin Railway station and he stated that the footfall is above 1000 each time they do such an activation across Delhi. He added that, though 60-70% are returning Vodafone subscribers, they get a huge chunk of conversions from people using competition networks. These people either use MNP to switch to Vodafone or completely dump their old number and get a new Vodafone number instantly.

Summing it up, Vodafone Bazaar is a brilliant marketing plan that involves personal touch and old school reward program to entice audience. We really appreciate Vodafone India to come up with such an initiative and congratulate them for executing it so well.