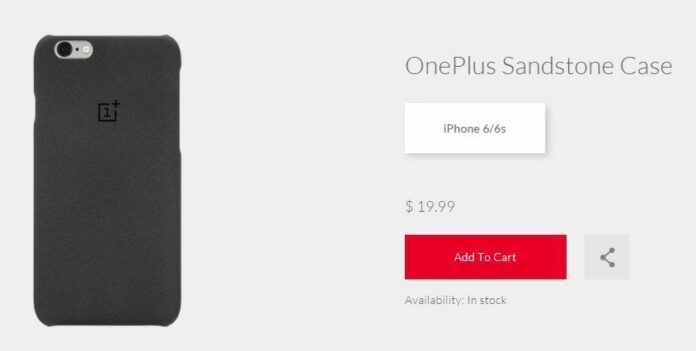 #ThatMoment when a disruptive android smartphone maker launches a case/cover for the Apple iPhone. Yes! It’s difficult to explain “Never Settle” to someone who sees their phone as just a phone.

OnePlus explains “We love tech and the endless possibilities that come with it. When we’re passionate about something, we might come off as – for lack of a better word – overzealous. A simple question about the Internet of Things could spark hours of conversation, and waiting for the next big product launch can avalanche more anxious feels than Christmas Day. And just like with anything else we really love, we want to share it with others. So, we have something to share with you. Sandstone, the signature finish for our flagship line, is something people have come to equate with OnePlus. Some reviewers have even devoted entire articles to it. Take this example from TIME magazine:

“Almost every other modern smartphone has a back cover that might as well be made out of soap [sic] bar. […] But the OnePlus 2’s back cover — I’m talking about the ‘Sandstone Black’ option — feels something like a smooth sandpaper that’s grippy but also comfortable. I would have absolutely no qualms about going case-commando with this phone. It’s that good.”

There you have it. If Sandstone were a fictional character, it would probably be Jon Snow – rough, yet charming, and one-of-a-kind (and definitely not dead). Sadly, most people have yet to experience the uniqueness of this texture for themselves.

For INR 1,199, the Sandstone iPhone Case will be exclusively available on Amazon.in in the latter half of December 2015 for you to give the gift of Never Settle. Made exclusively for the iPhone 6 and iPhone 6S.