The Unbiased Blog
Home News Tech Is this the successor of Yu Yureka?

Yu Yureka was one of the best smartphone with powerful specs and an exceptional price of under Rs 10,000. All this made it a really popular device of 2015. After the success of Yu Yureka, Yu launched Yureka plus with minor change i.e a Full HD screen and a sony Exmor sensor camera. Later they launched Yu Yunique and Yuphoria which were priced lesser than Yu Yureka. At the end of 2015 YU launched their first Flagship smartphone Yutopia. Now we may see a new smartphone from the Indian smartphone maker and seems to be a successor to Yu Yureka as benchmarks and import data suggests that.

Indian import and export site, Zauba, lists a new Yu smartphone shipped on March 21st with model number Yu 5200. The smartphones were shipped from China, and price spotted there is Rs. 9,036 per unit. The pricing usually are not accurate reflections of actual market price.

Also, GFXBench suggests that the device is a 5.2″ display with FHD resolution,  Octa-core Snapdragon 615 processor, 3GB RAM and 16GB ROM, 12MP and 5MP camera setup and 4G support. According to the leaks the smartphone is still running on Android 5.1.1 Lollipop. 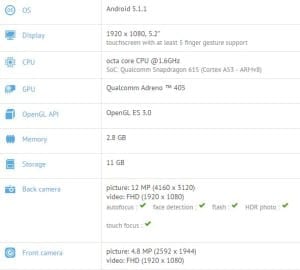 We are expecting it to be launched within price tag of Rs 11,000. What is your price expectation? Do let us know in comment section below. For more news follow us on Facebook and Twitter.