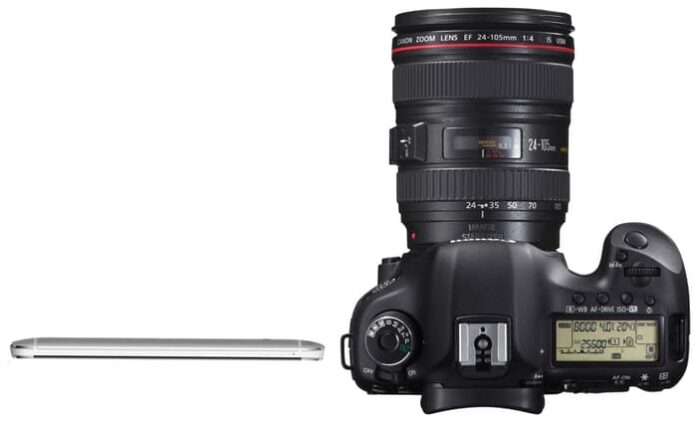 I’m writing this post as I’ve been flooded with mails and messages asking me which camera smartphone to buy for DSLR-esque level photos and videos. And my reply has been constant since the time people started comparing their camera smartphone to DSLR’s. There is NO smartphone replacement for DSLR’s as of yet, we can still compare point & shoot camera’s to our smartphones but not the DSLR’s.

There is no denial that the point & shoot camera market has been overtaken by smartphones. Therefore, people started writing off DSLR’s too. But the primary reason for the lack of interest in point & shoot camera’s was not because of their photo quality that almost matched smartphones but instead the advent of social media.

You must be wondering how can social media determine the sales or interest for a particular camera. But the truth is the lack of capability to share media directly to social media is what made smartphone cameras our preferred choice. And platforms like Instagram and Facebook played an important role as to how we manage our content online. Gone are the days of capturing 36 photos on a reel and then getting them printed as a memory. Now our memories are defined by whats on Facebook or other social media platforms. Therefore, camera smartphones are the ultimate weapon of choice for all our photographic need. I’ll again stress on the point that the only reason people prefer camera smartphones over DSLR’s or other types of camera’s is the ease of sharing content online.

With smartphones we can click and instantly upload content online but with camera’s there has always been this cumbersome process of transferring files to a PC first before we can share it online. Honestly even I avoided using my DSLR at launch events and conferences to avoid the delay and pain of moving files around to publish them online. For example – If I am at a smartphone launch, I’d rather click and upload multiple photos on social media directly through my smartphone rather than going through the tedious process of doing it via a DSLR. But still I had to capture photos on my DSLR for sharing it online later as smartphone photos are never good enough when you need depth-of-field and low light captures.

But what if I tell you that I recently got a DSLR camera that not only clicks great pictures but also let’s me do it through my smartphone. Yes you read it right! Canon recently launched the Canon EOS 1300D in India which comes with WiFi and NFC to click and share instantly. All you have to do is enable the NFC/WiFi on your 1300D and download the Canon Camera Connect app on your iPhone or Android Smartphone. Once the Camera Connect app is downloaded on your smartphone, you can: Now doesn’t that change the fundamentals of DSLR photography? As a journalist, I’m relieved that I dont have to shoot twice at launches and event. And, also the fact that I can totally skip the transfer to PC part is the best thing to have happened to DSLR photography.

Now that you have learnt how Canon EOS 1300D can help you do work more efficiently and faster. Let’s get into the technical details as to why smartphones can never match the level of details a DSLR captures. For that you need to know that one of the most important factor for the quality of a photograph or video is the Image sensor on the camera. In layman terms, bigger the sensor – better the image quality.

Looking at this image sensor comparison, you would know why the Nokia 808 Pureview could capture such great images. Simply because it had the biggest camera image sensor in the smartphone industry. But don’t be mistaken that iPhone 5s clicked bad pictures just because it has the smallest image sensor in this comparison. In fact, it clicked better pictures than any of these smartphones in this comparison. And the reason for that is Apple’s prowess in Post Processing of Images and HW-SW integration. But Nokia 808 or Lumia 1020 would beat others hands down when it comes to detailing (Zoom or Macro) or capturing in low light.

Now isn’t that an eye-opener as to why we can never achieve DSLR level of details and results with our smartphones. There is no doubt the latest smartphones like iPhone 6s or the Samsung Galaxy S7/S7 Edge captures great photos and videos, but then again the difference between a Smartphone Image sensor and DSLR Image sensor plays a huge role.

Next thing I want to touch upon is the Megapixel count which people worry about a lot when buying smartphones. But Samsung, recently with the launch of Galaxy S7/S7 Egde helped me prove my point that higher Megapixel does not mean better photos. Samsung lowered the MP count from 16MP to 12MP in the S7 when compared to it predecessor S6.

The image sensor of the Galaxy S7 camera has a size 1.4µm each, while the older S6 had 1.12µm in size. This means that the S7 and S7 Edge can capture 56% more light on its image sensor. The effective maximum image resolution of the rear camera is 12 megapixels with a brighter F1.7 aperture on the lens with Smart OIS (optical image stabilization). This is a significant change from the predecessor’s 16-megapixel, F1.9 aperture rear camera.

Now compare that to a DSLR like Canon EOS 1300D that comes with 18MP to a smartphone with lesser megapixel count and smaller image sensor. In simpler words you can’t match the Megapixel : Image Sensor size of a DSLR with a smartphone. And if you thought, I’ve proved my point that DSLR are and will always be better than Smartphone cameras. The answer is NO! There are lot more areas where smartphone cameras falter when compared to DSLR’s.

So we are done with Image Sensor and Megapixel count. Now it’s time to factor in another important aspect of a DSLR camera – Lens. They say the lenses you use determine the quality of the photo than the camera itself. A DSLR’s body works in tandem with the Lens you mount on it. And Canon has the biggest lens system in the World – the EOS lens system. With DSLR’s you have an option of different kinds of camera lenses, including wide angle, telephoto and specialty. This can never happen with a smartphone, there is no option to change/mount the lens. Have a look at this image to understand how different lens help us achieve different types of frames of the same location – The level of creativity will always be more with a DSLR as you have so many options to play around with. With this, I conclude that my recent experience with Canon EOS 1300D and the Canon Camera Connect app was impressive. We at The Unbiased Blog give a thumbs up to the Canon EOS 1300D as a preferred entry level DSLR. So what are you waiting for? Here is the best buy link for INR 26,500 from Amazon – http://amzn.to/1rchLya