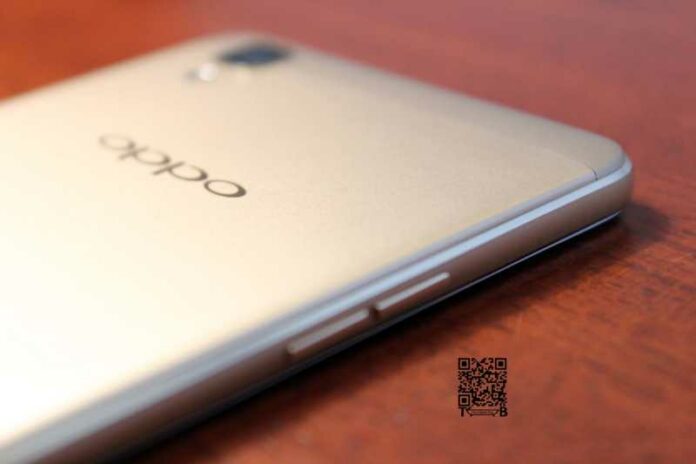 Selfie is not just a word that has been added to the renowned dictionaries but instead it’s a huge phenomenon. There isn’t a habitable corner left on this planet where people arent clicking ‘Selfies’. From celebrities to just about everyone is obsessed with Selfies. When Ellen clicked a selfie at the Oscars, little did she know that it would bring down twitter. Right now ‘Selfie’ is a wildfire that has absorbed almost everyone who has a smartphone/tablet with a front camera. Be it The list is practically endless, sportsmen to soldiers all are clicking selfies. Would you believe me if I tell you that over a million Selfies are clicked each day? Well here are some facts about ‘Selfies’ If you are wondering, why am I stressing so much about ‘Selfies’ in a smartphone review then here’s why? Oppo recently launched ‘Seflie Expert’ range of smartphones that are supposed to give you the best selfie possible with each shot. But does it deliver, let’s found out in the unbiased review of the Oppo F1 smartphone.

The Oppo F1 comes in compact white box with the data cable, charger, in-ear headset, silicone case, sim tray ejector pin and the usual documentation. The quality of components is premium from the word go, just as you’d expect from Oppo. 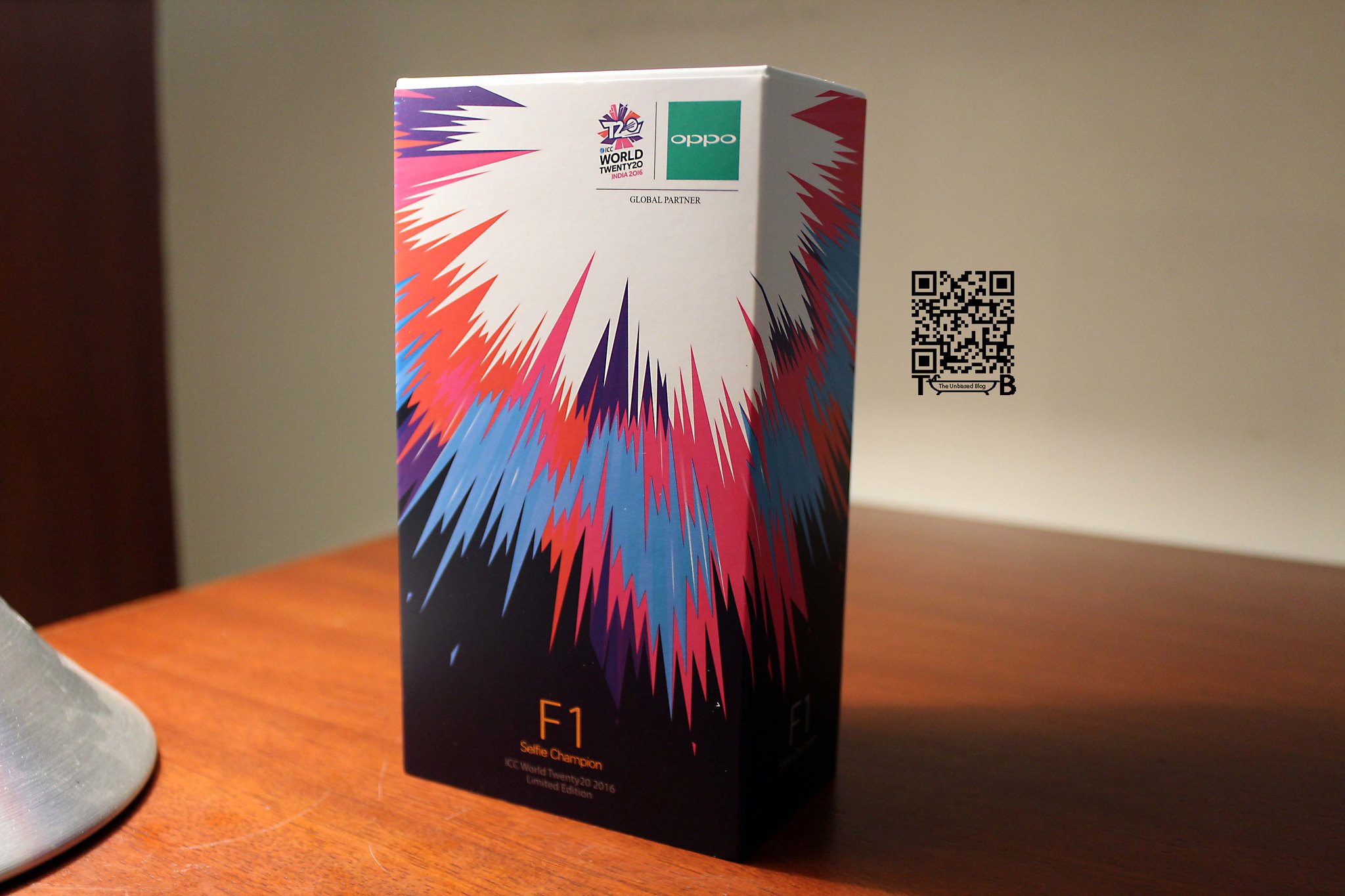 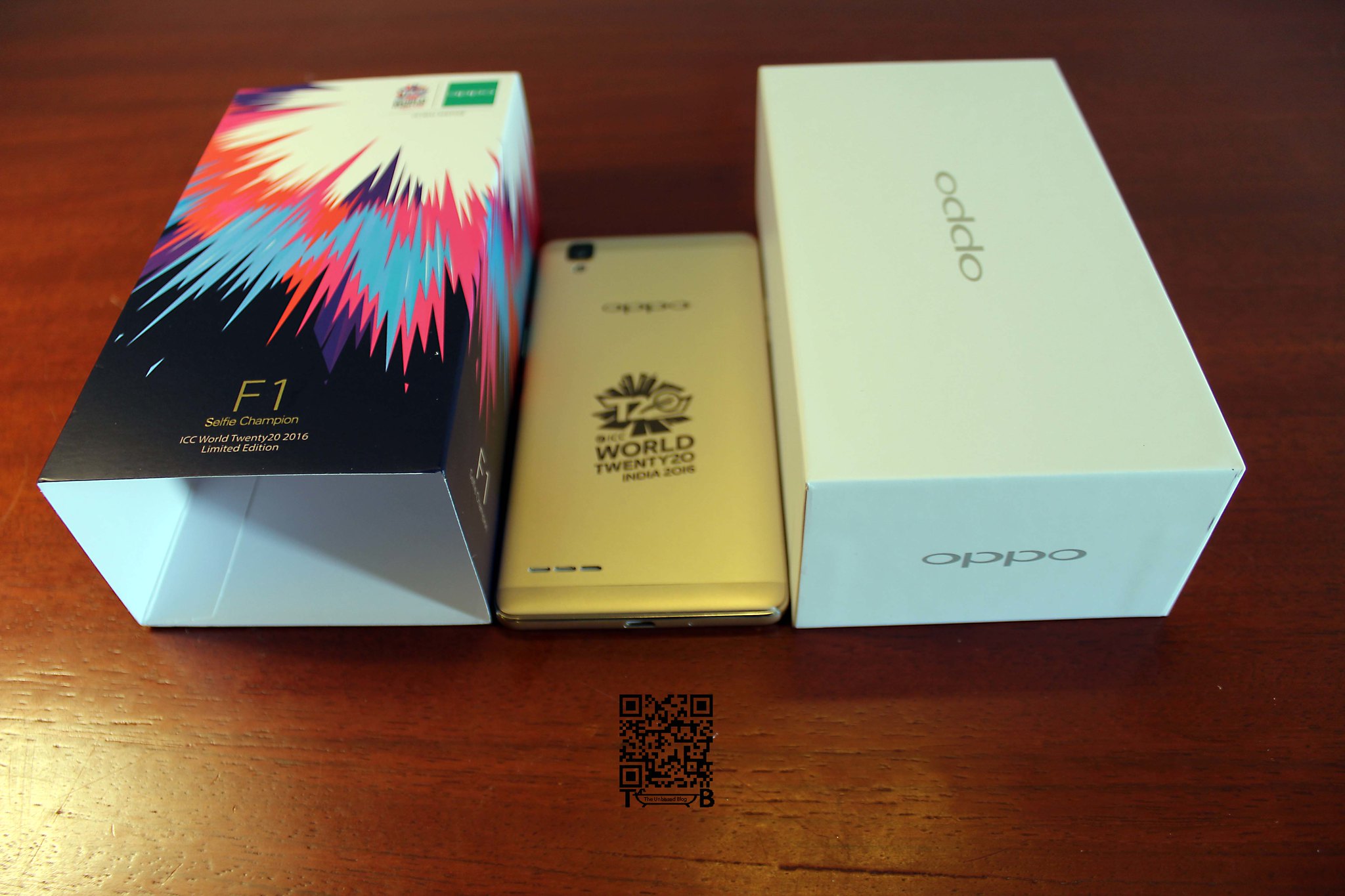 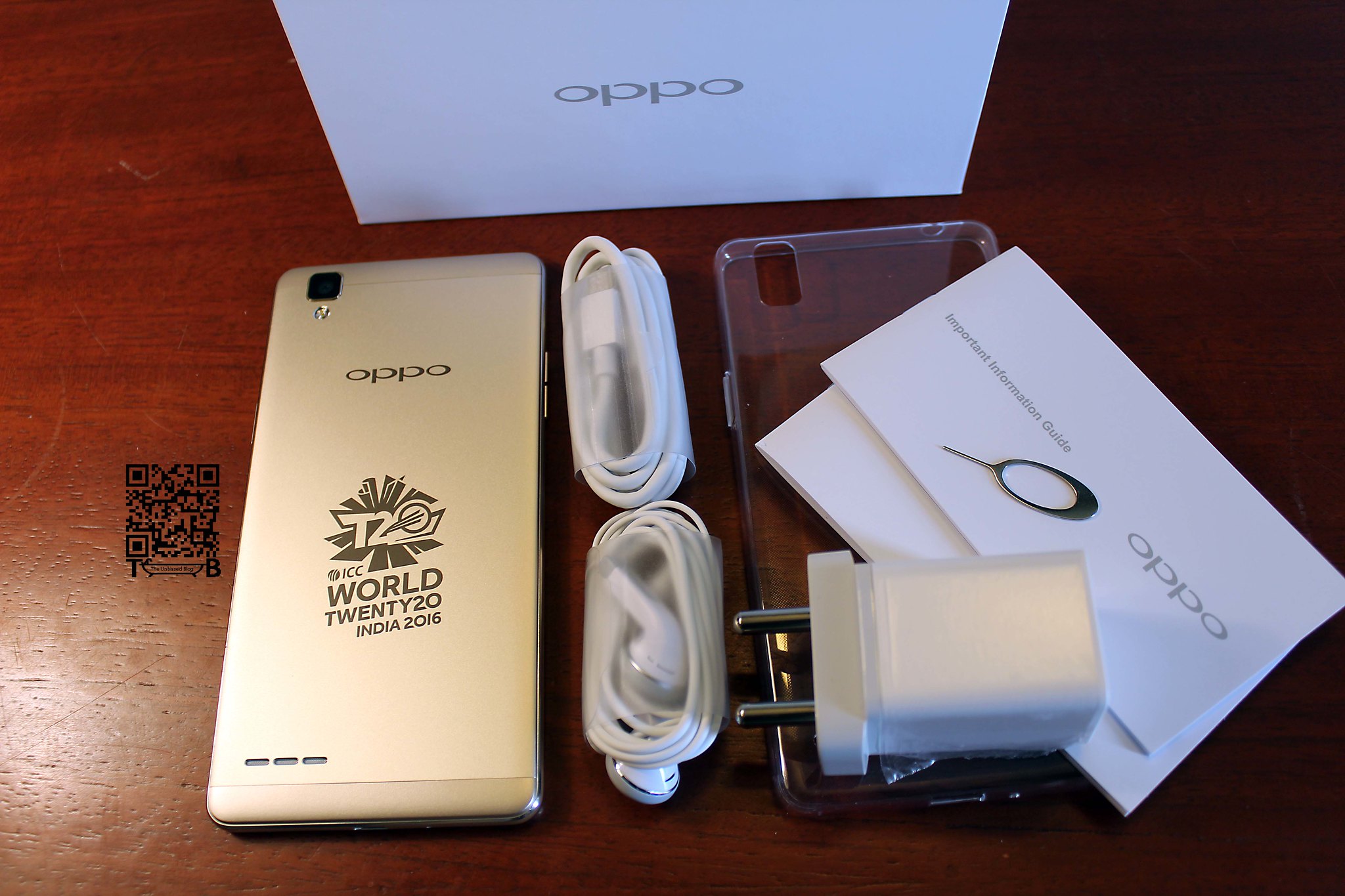 We have always loved the design aesthetics and build quality of Oppo devices. Be it the Oppo N1 or the Mirror 5, all their devices have a distinct design and premium build. And so is the case with the Oppo F1, the devices has a metal chassis which feels premium and is surprisingly lightweight. Most of the body is made from metal apart from two plastic caps for the antenna area, and a 2.5D piece of Gorilla Glass over the screen. The 2.5 curved glass, the plastic caps and the metal chassis blend together beautifully. 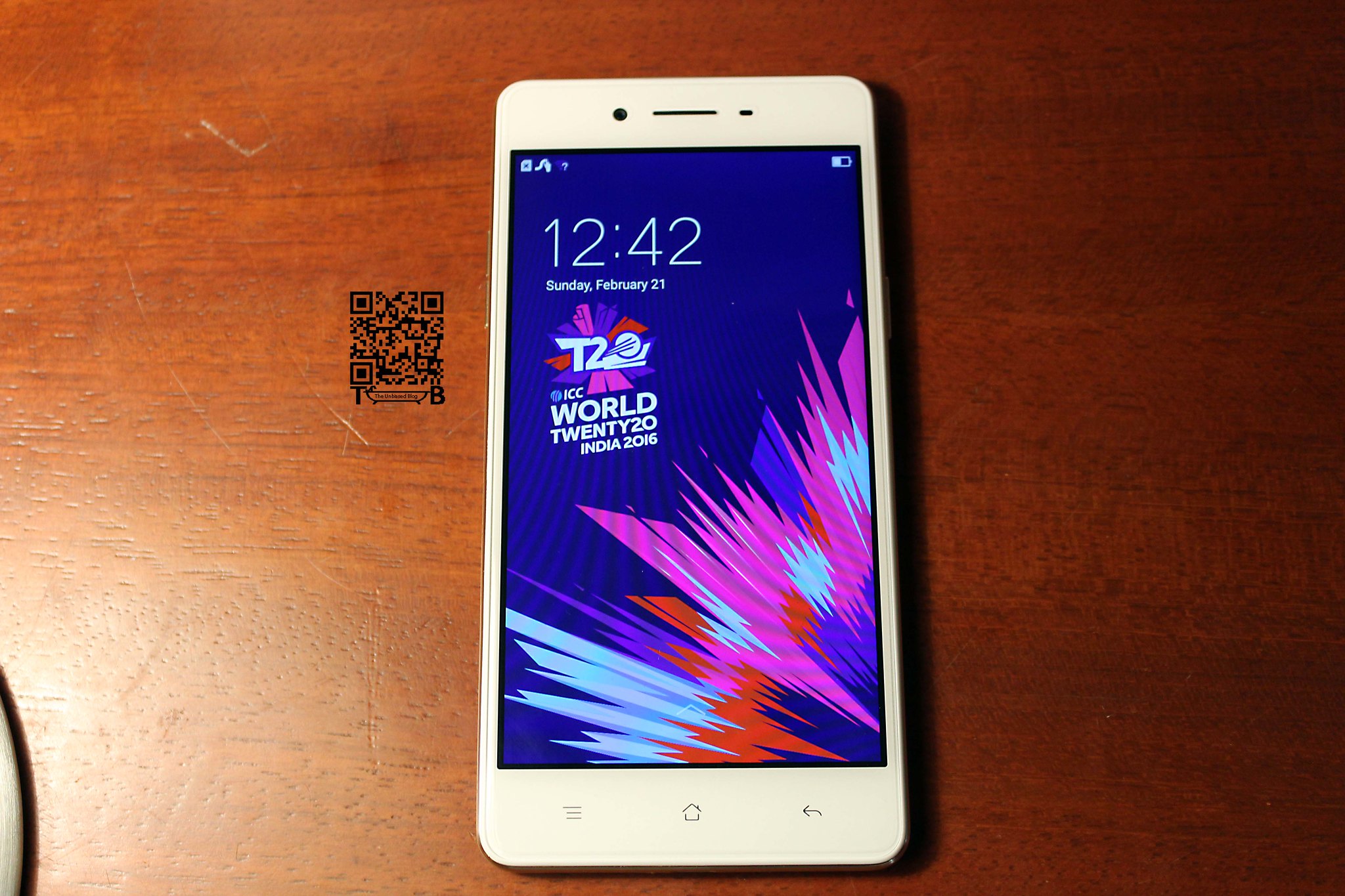 I personally always like smartphones with 5″ or below screen size as they are easy to grip and are comfortable for single hand operation. Therefore, the Oppo F1 was a delight for me to use a daily driver for a few weeks. But both low resolution and PPI are something that could have been better with a product at this price. 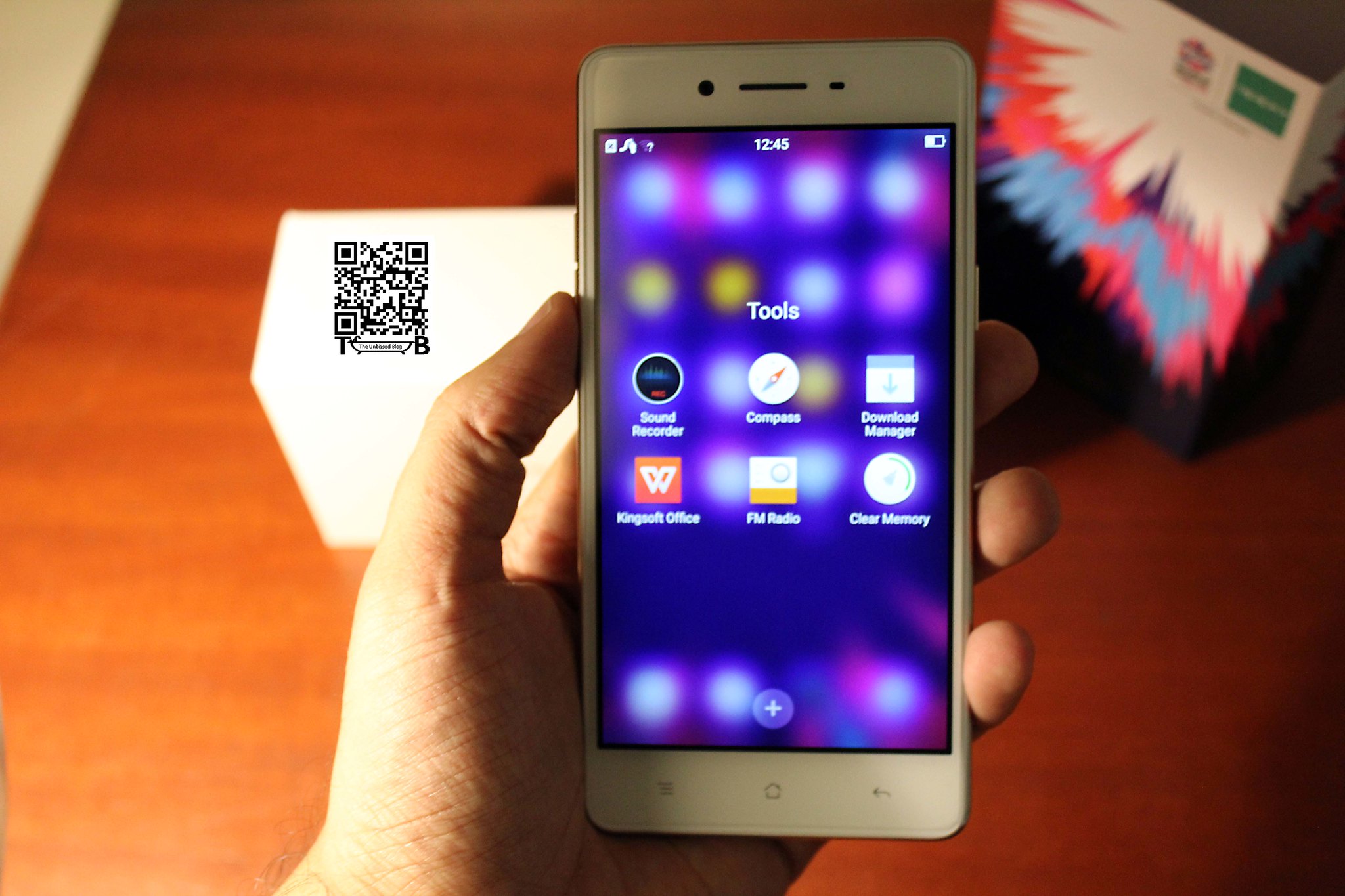 On the front, the device has a vivid 5″ display with navigation buttons (annoyingly not backlit) at the bottom and its USP 8MP selfie camera, earpiece and sensors on the top. The volume rockers and power/sleep-wake buttons are placed on opposite sides. On the back, you get the 13MP camera with LED Flash, the Oppo branding and the speaker grille at the bottom. 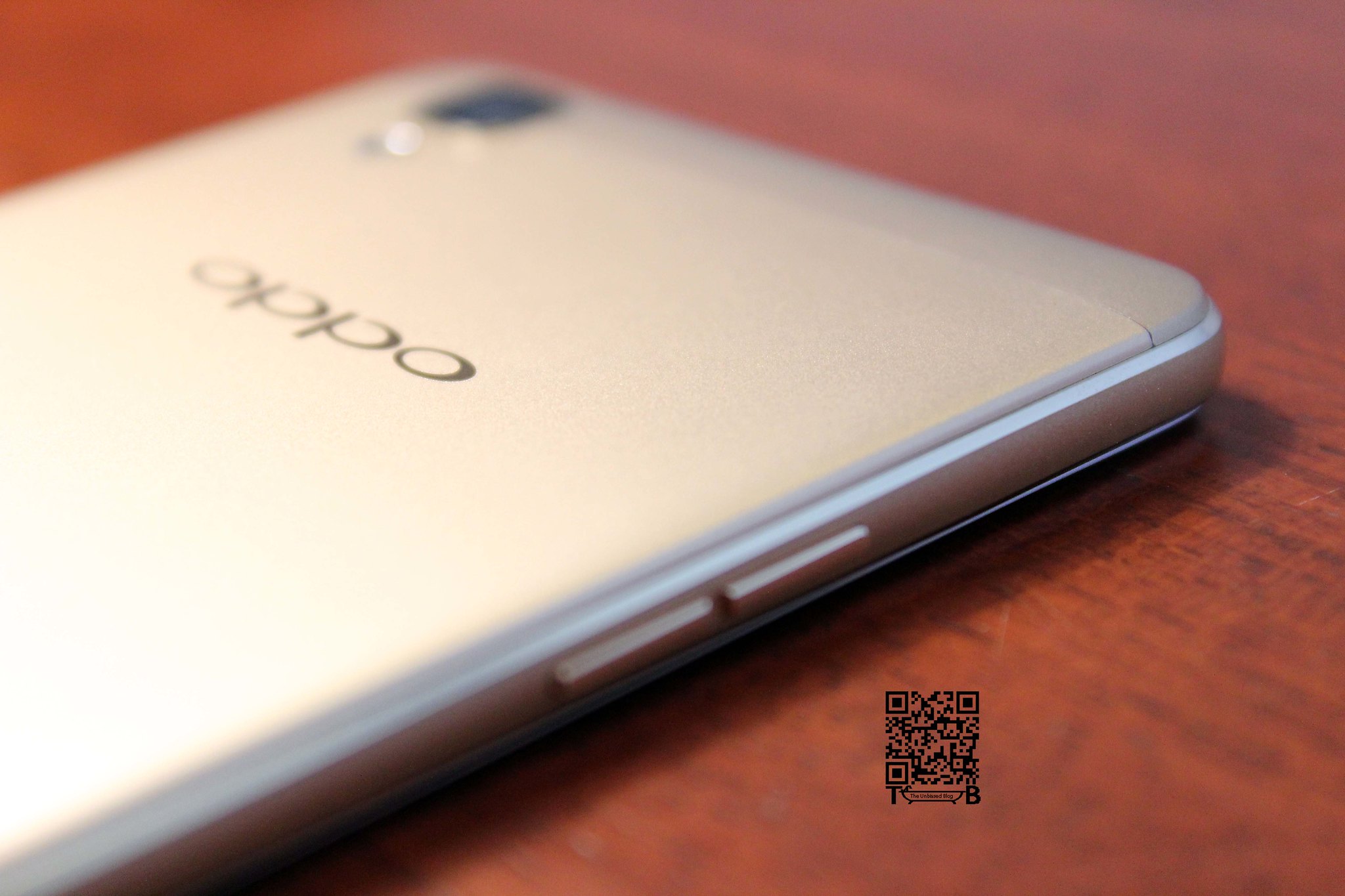 Oh let me rub it in again, if you are lucky like me then you get a special ICC T20 World Twenty 20 India 2016 logo embossed on the device. Making it the best memorabilia available out there for cricket fans 🙂 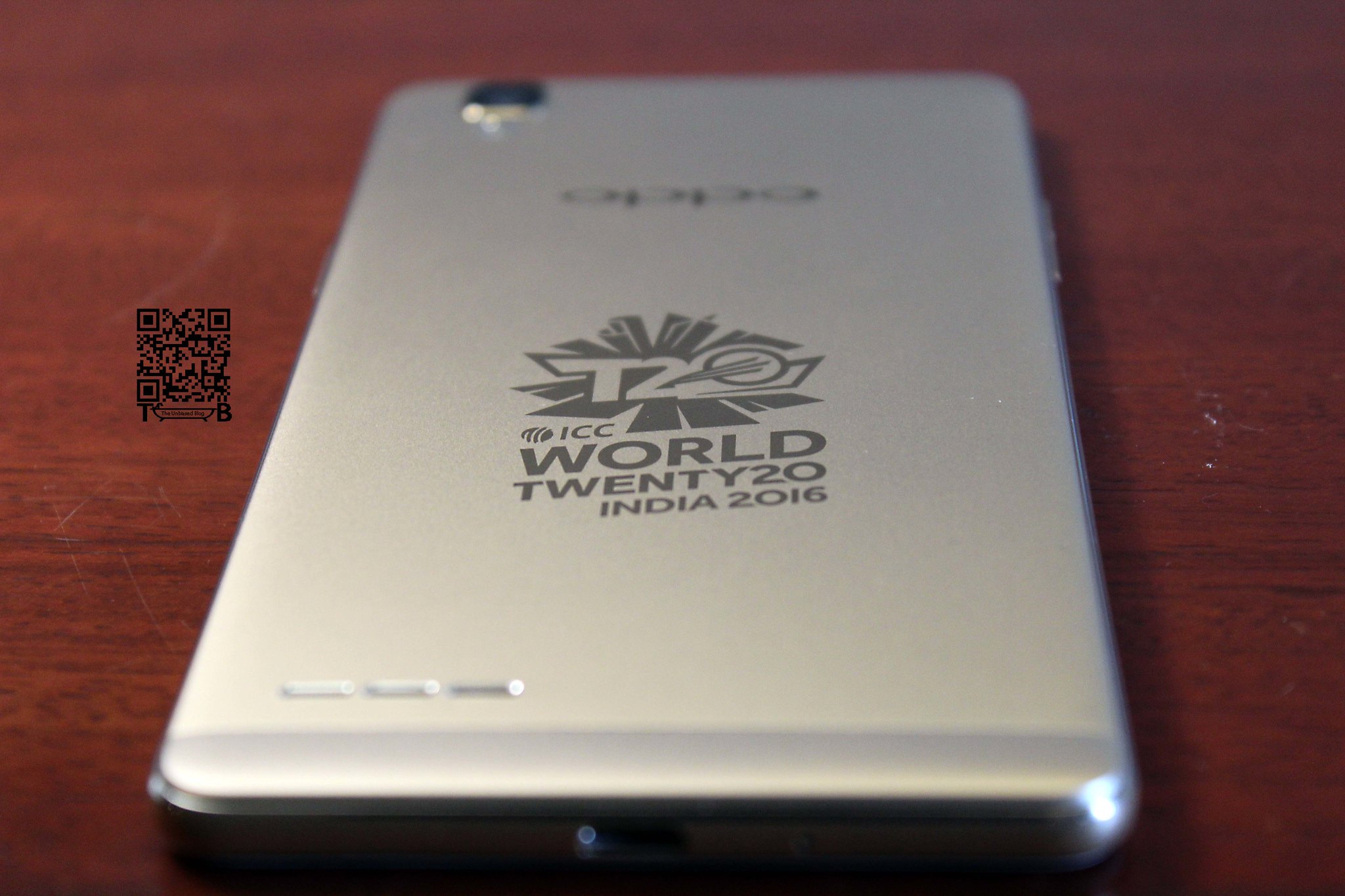 Before we move on the the other aspects of this review. Let’s check out the photo gallery –

The specs and price of the device puts it above the competition in its mid-range category of smartphones. The Snapdragon 616 running inside is a 64-bit processor with eight Cortex-A53 cores running at 1.7 GHz. Apart from the Snapdragon 616, the smartphone also has the Adreno 405 GPU and Qualcomm’s own Hexagon DSP for audio and video processing.

On the storage front, the device comes with a meagre 16GB inbuilt storage but the expandable MicroSD card slot with 128GB support compensates for it. We tested the 32 GB internal storage variant, in which 25 GB is what the users get on the first boot. 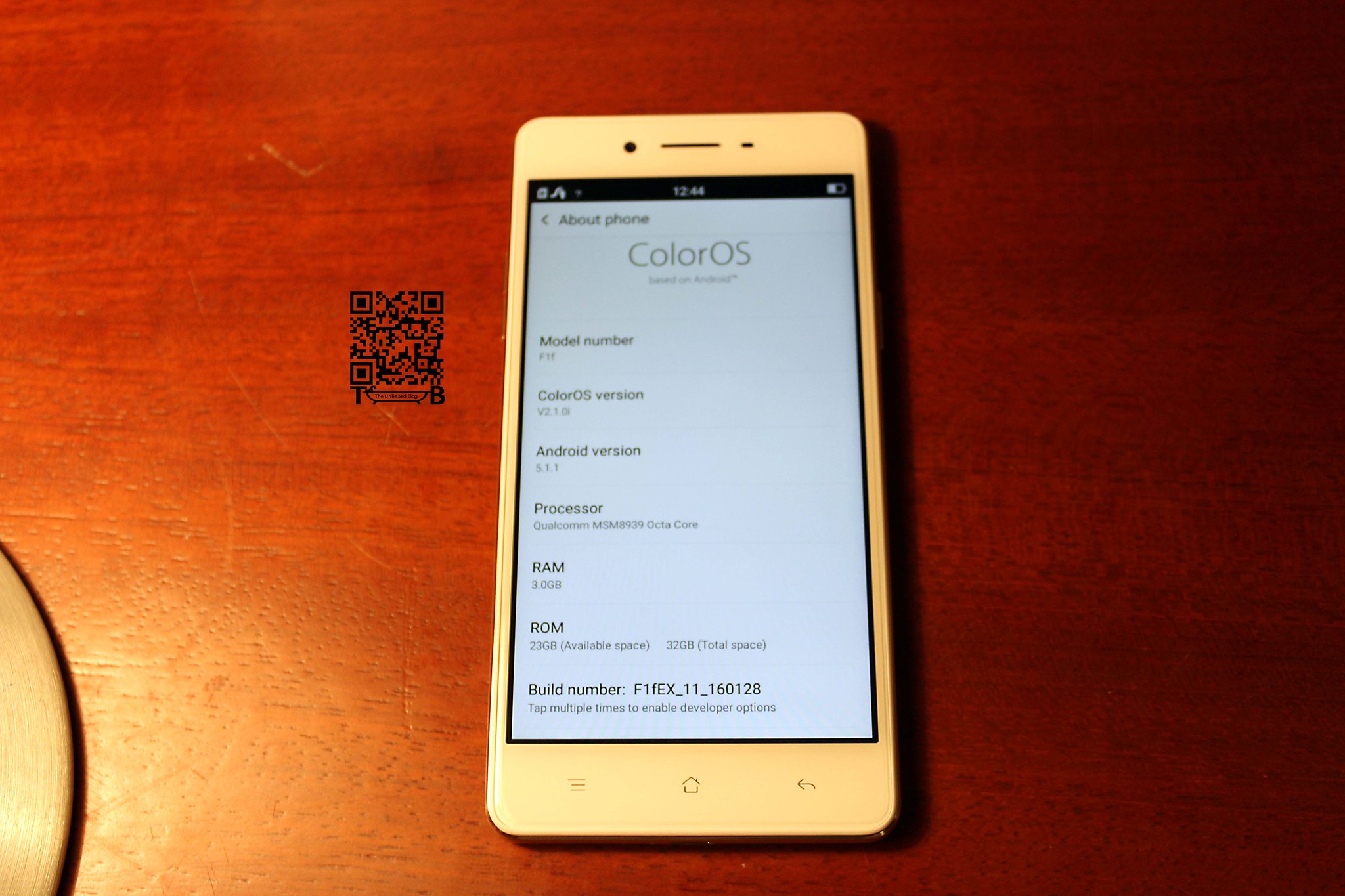 The fact that Oppo didn’t add it’s proprietary VOOC quick charge technology in this device is bit of a let down. Specially when the device has a 2500mAh battery which is usually not adequate for heavy duty android users.

The speaker on the device is not stereo but it’s placed well on the rear avoiding accidental coverage while holding the device. But thanks to FLAC support the lack of stereo speakers is compensated by high-bitrate audio/video playback. The supplied headset aren’t as premium as we would have expected from Oppo but the audio quality is decent. 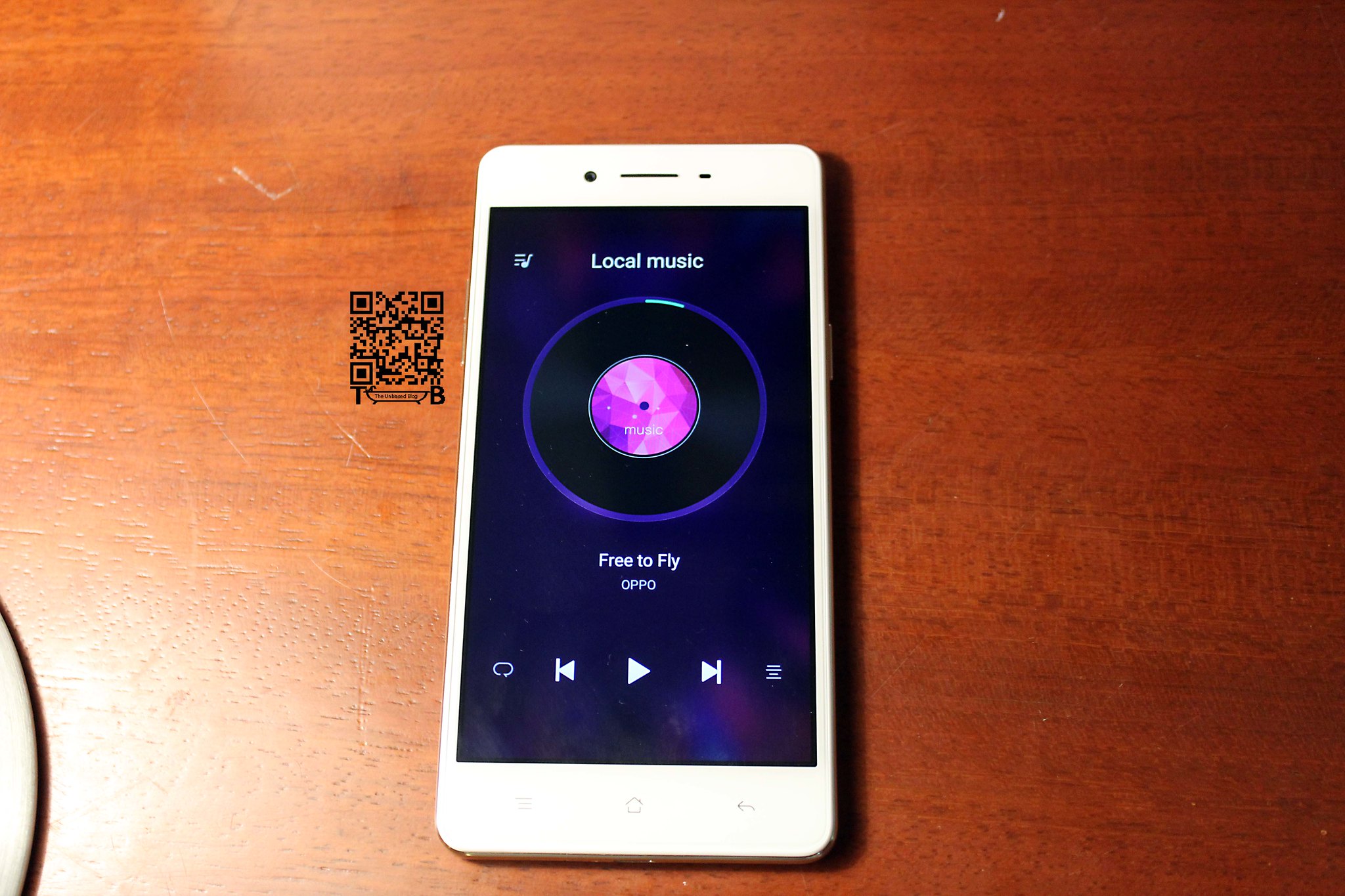 Also, no fingerprint scanner on this device, which makes it a backward and less future proof device considering its 2016. In terms of connectivity, the device is equipped with everything except NFC. It has 4G VoLTE on band 1, 3 and 40; Wi-Fi b/g/n, Bluetooth 4.0, USB OTG, FM radio, and GPS.

The Oppo F1 runs on the homegrown ColorOS 2.1 based on Android 5.1 Lollipop. It is zappy, smooth and has very little in way of bloatware. Interestingly, ColorOS works in favour of the device and keeps the OPPO F1 in pristine shape by clearing caches, shutting down unused apps, and doing general tasks that users have to manually on other Android devices. 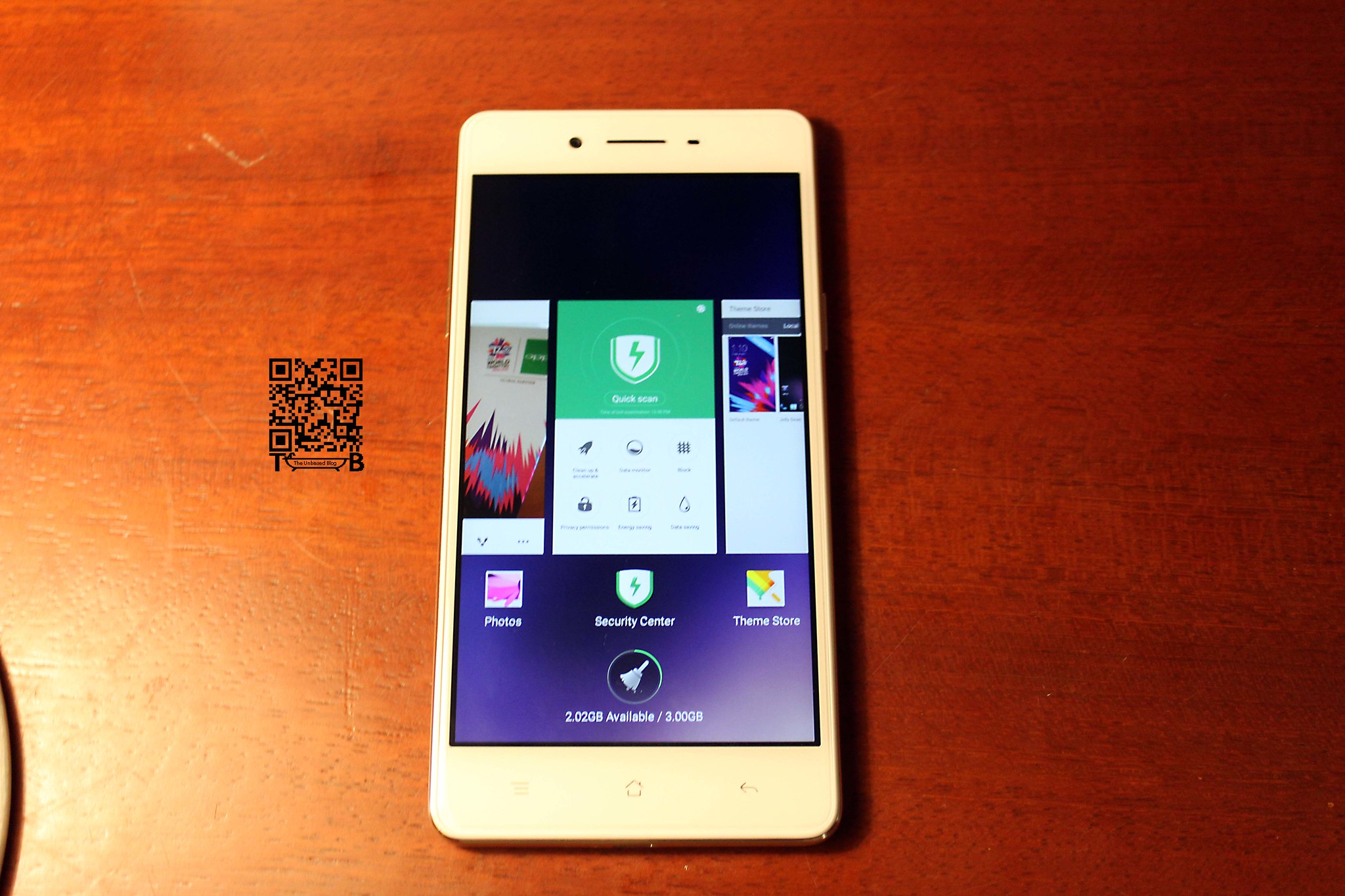 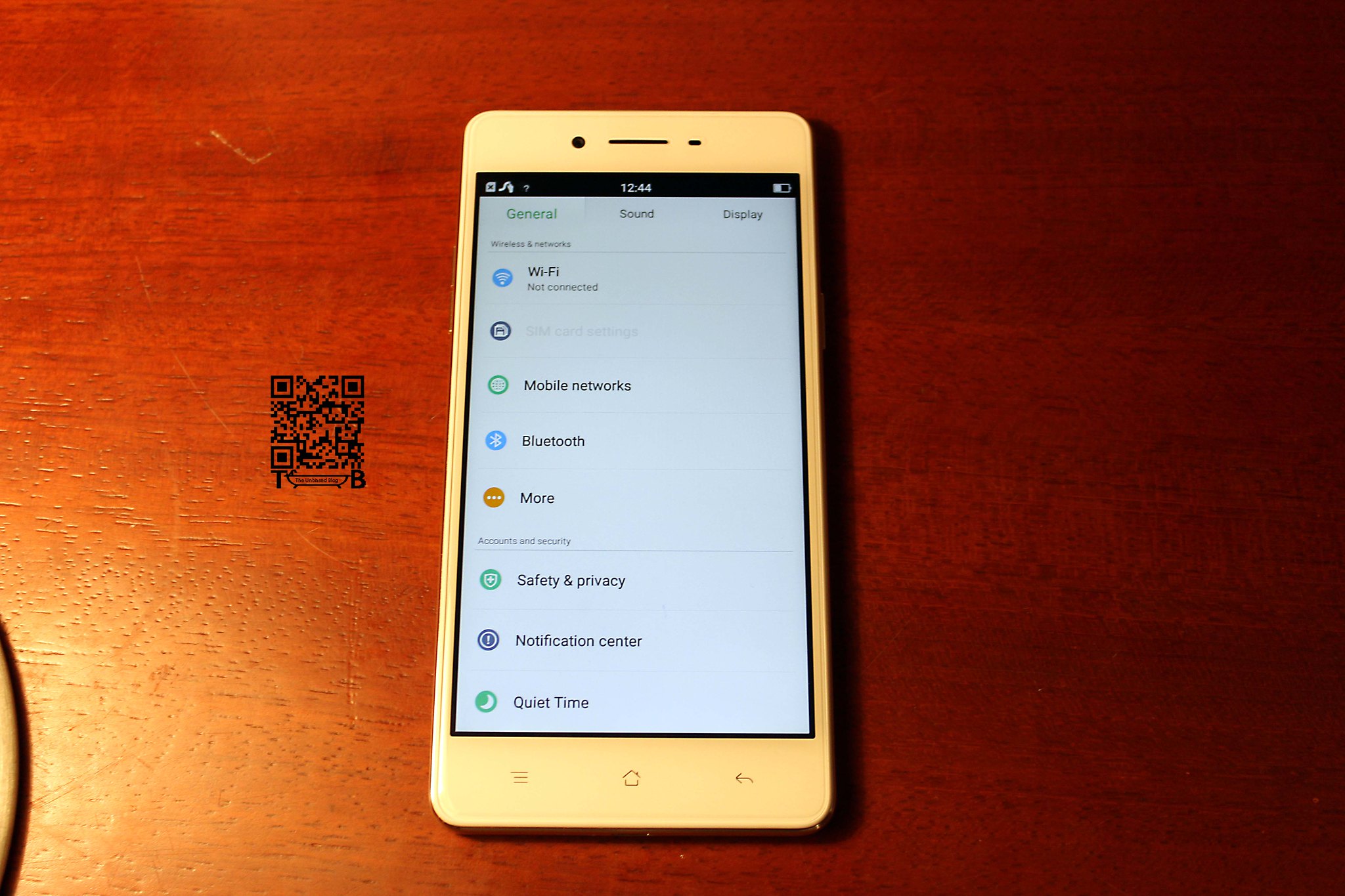 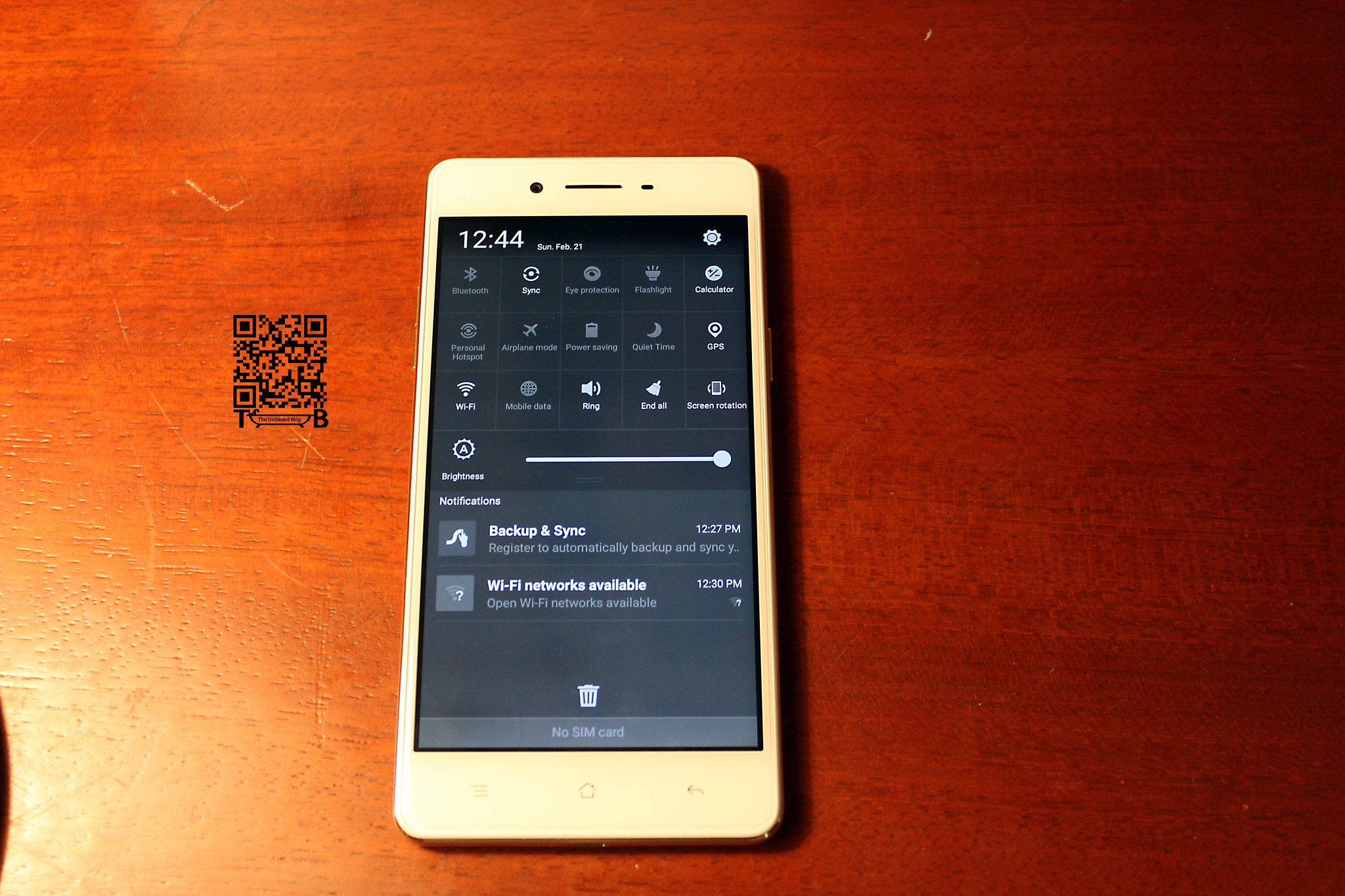 Oppo’s ColorOS has near vanilla Android experience and is one of the few overlays that we like.

Even though I was moving from the likes of Samsung Galaxy S7 Edge and iPhone 6s to test this device. I never felt the device was slow, in fact performed really well with anything thrown at it. Of course, you can’t expect superfast performance similar to the flagship devices but nonetheless Oppo F1 doesn’t disappoint at all.

The combination of a 2500mAh battery and no VOOC fast charging in the Oppo F1 is not a wise decision by the chinese smartphone maker. In our test of the battery performance, the smartphone lasted roughly 8 hours on full charge. But that’s with my kind of usage that includes – Syncing 6 email accounts every 15 mins, syncing 4 twitters accounts, a lot of YouTube and music playback. 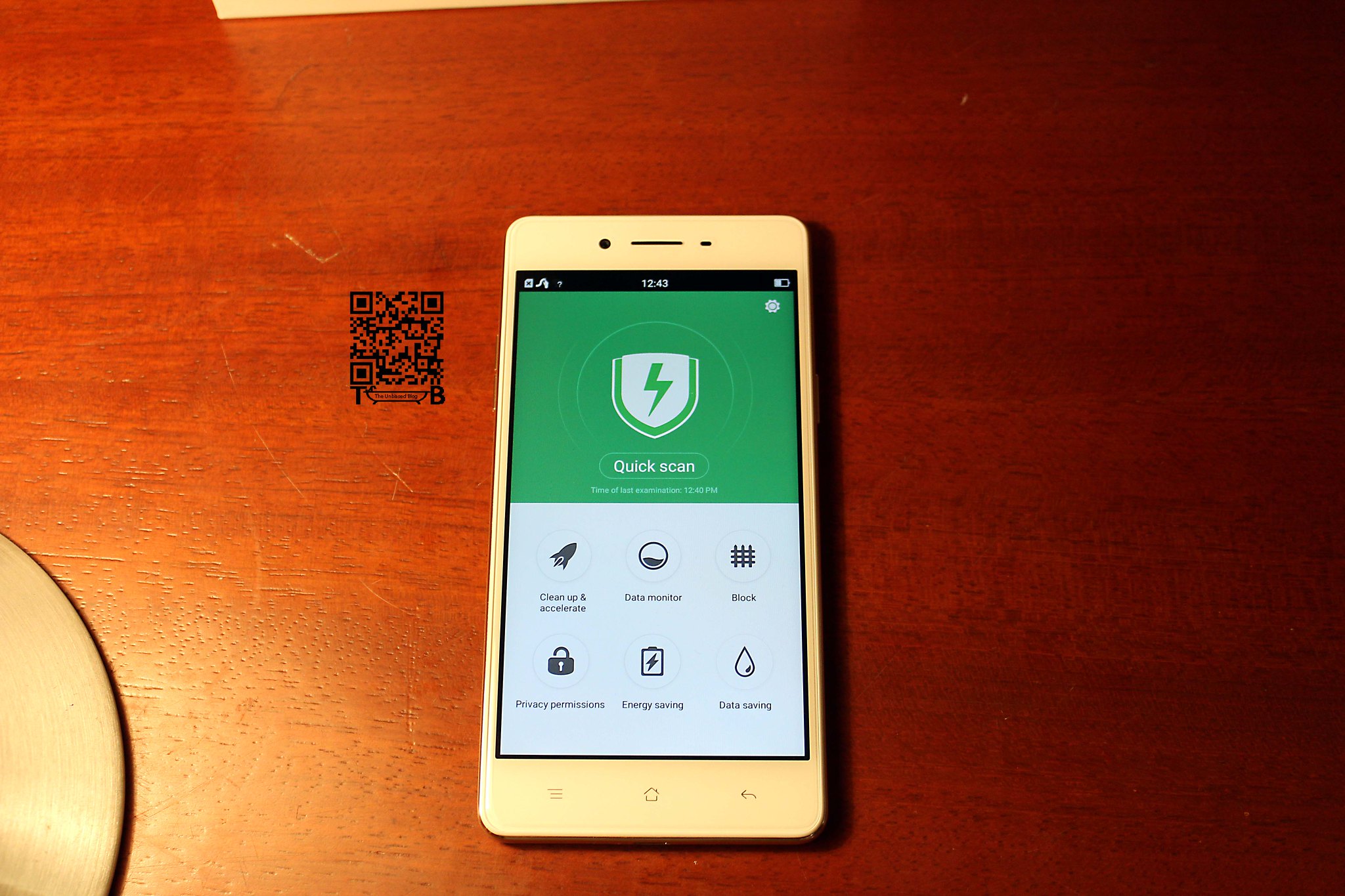 Henceforth for an average user, the battery should last up to 12 hours on a single charge. But again the lack of VOOC definitely hurts when it’s needed.

I’m not much of a mobile gamer but for testing purposes, I tried the Danmaku Unlimited and it played superbly in HD mode on the F1 — even with the difficult expert mode. Even while playing Asphalt 8, the Oppo F1 didn’t show any sign of sluggishness or heating when we turned up graphics and shadows to maximum. Isn’t that impressive for a phone for a mid-range smartphone?

Oh! I hate benchmarks, but we still have to put all the phone through a few benchmark tests. And on testing the Oppo F1 you’d know that it’s not a flagship phone or vouching to be flagship killer. But it offers strong performance at a sensible cost as promised by Oppo.

Camera part of the review usually starts with the secondary camera but in this case it’s obligatory to start with the Selfie camera. The front camera on the F1 comes with an f/2.0 lens, which is even bigger than the f/2.2 of the primary 13MP camera, allowing for more light to enter. It means, users would be able to handle low light situations better and capture better selfies in low light. 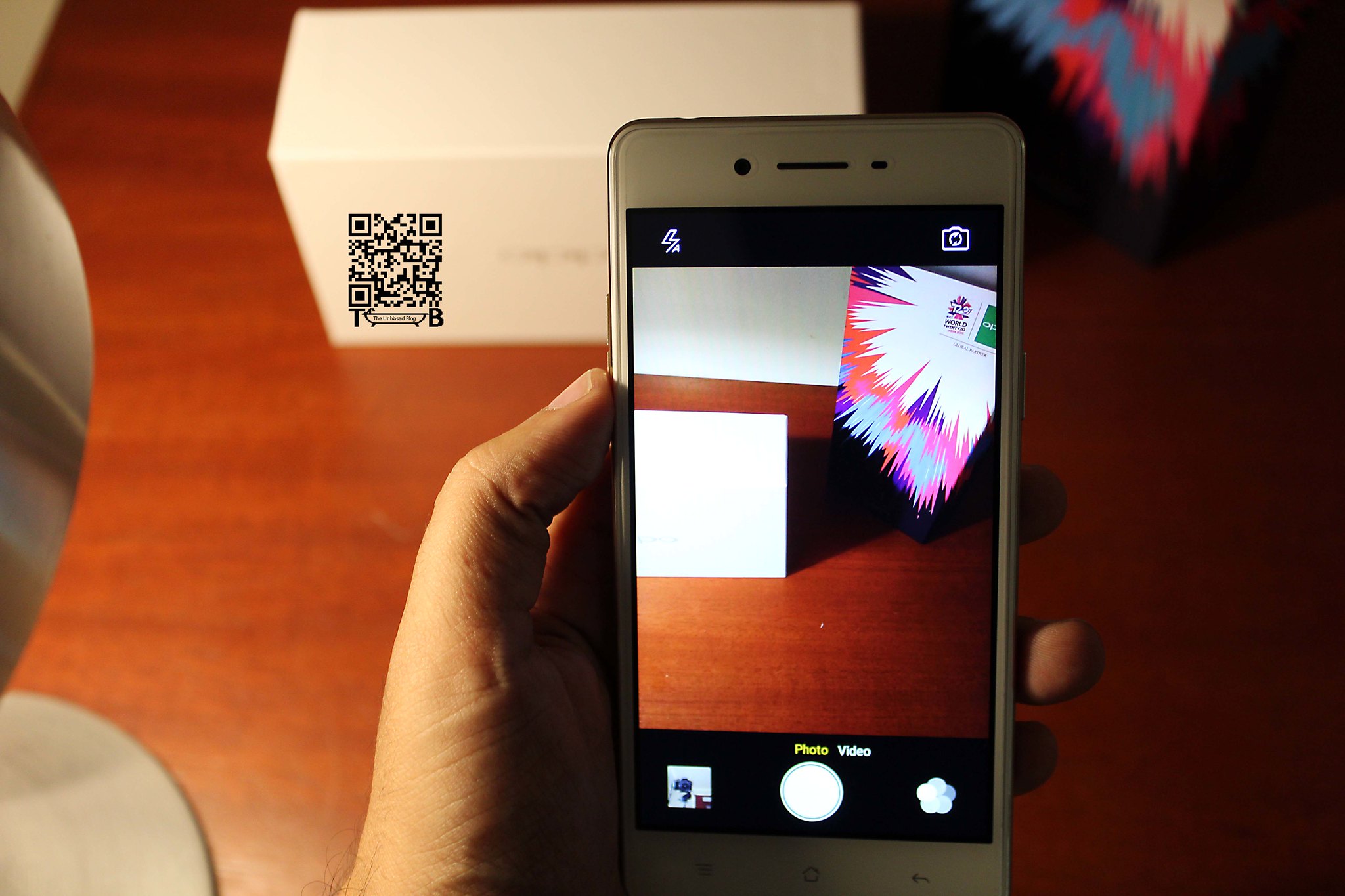 Moving to the 13MP primary camera, it’s decent camera to use in day light or good light conditions. But as soon as surrounding gets dark the details get poor and noisy. The autofocus is surprisingly fast, but the lack of OIS can make photos/videos blurry if there is rapid movement. 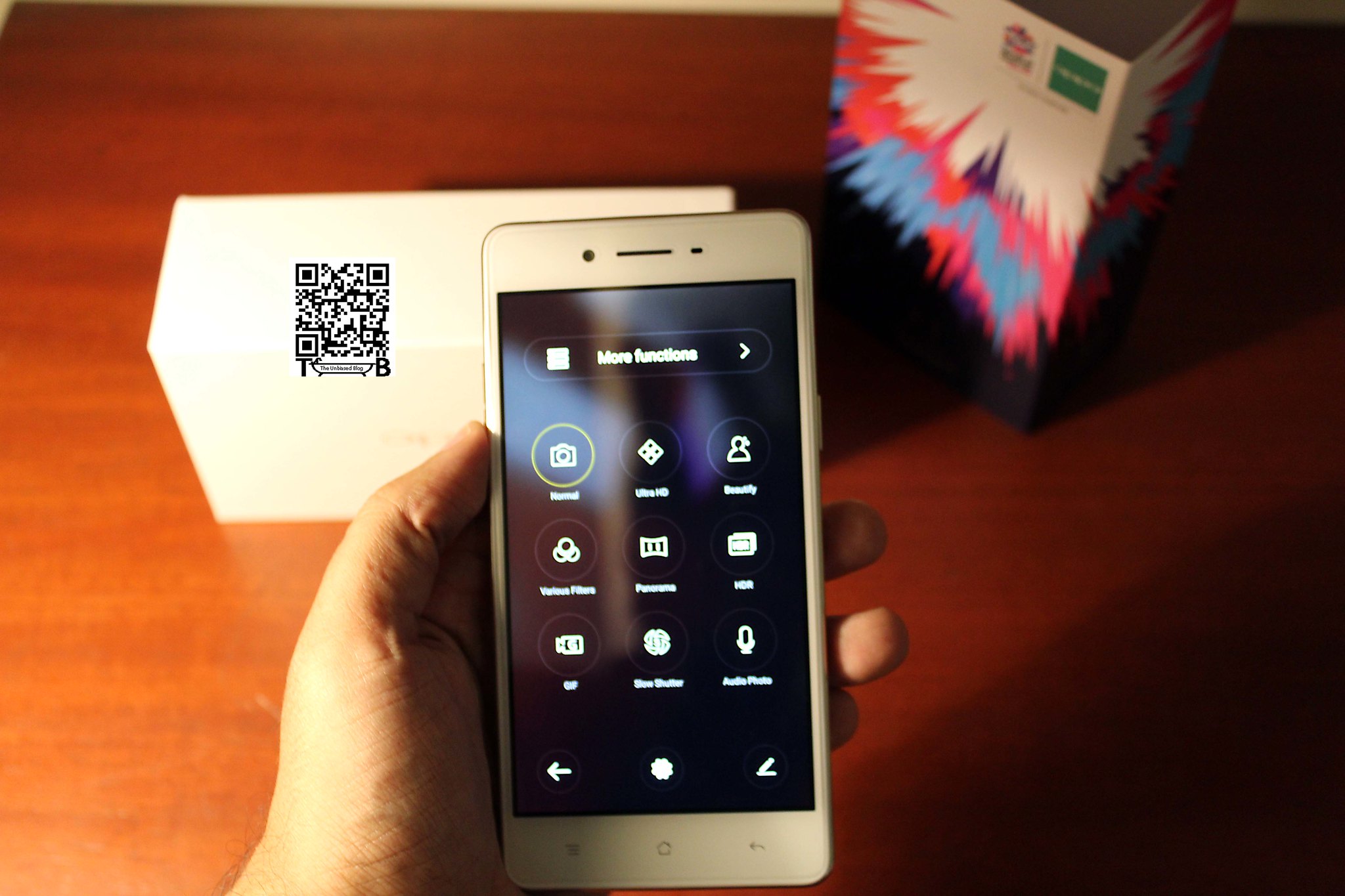 Like most of the Android smartphones out there, the device gets various shooting modes for the rear camera including Expert mode, slow shutter and HDR, among others.

It is refreshing to see an android smartphone which fits perfectly in the hands and is lightweight. And the icing on the cake is its great design and build quality at an affordable price tag of US$250 / INR 15,990. The USP of Oppo F1 is it’s selfie camera and it shines at being a Selfie expert. But Oppo is not the first smartphone maker to launch a Selfie centric smartphone, devices like Micromax Canvas Selfie, Asus Zenfone Selfie are some of the devices available under $250. 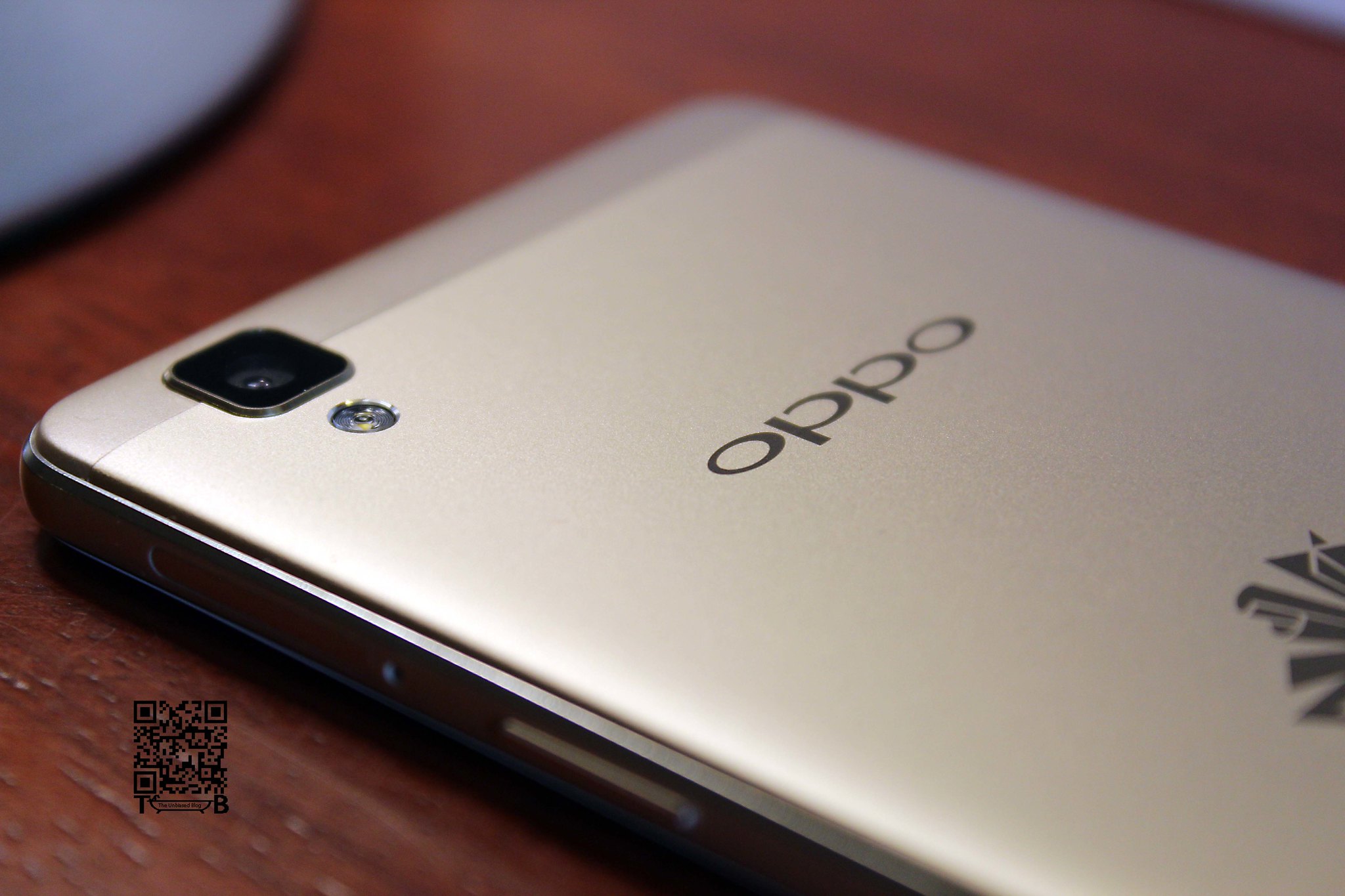 But, Oppo excelled in keeping the device both powerful and petite at the same time. It isn’t as bulky as its competition and has much better hardware + software. We recommend the Oppo F1 as your weapon of choice for all your selfies 🙂

Disclaimer: The Oppo F1 ICC WT20 2016 edition was a review device given to us during the ICC WT20 2016. For this review we used this device for over a month as our secondary device with an active Airtel 4G sim. Like most of our reviews it’s a long term usage review.