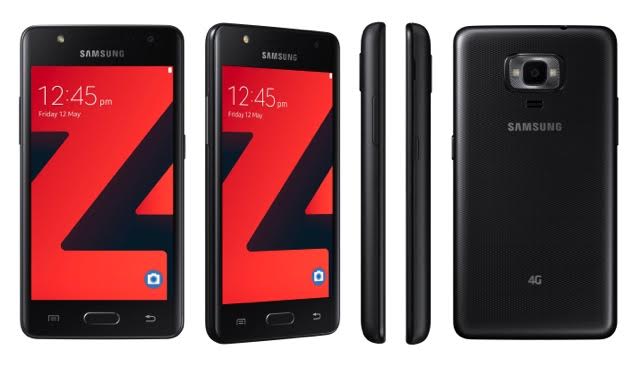 Samsung has expanded its Tizen OS smartphone lineup today with the launch of new Tizen Z4 Smartphone. As seen on the previous gen Z series smartphones, the Z4 also runs on Tizen OS instead of Android. The smartphone is priced well under 6K and is available in offline stores across India starting May 19th in gold and black colors for INR 5,790.

The device features a 4.5-inch WVGA Display with 800 × 480 pixels resolution, 1.5Ghz Quad Core processor, 1GB RAM, 8GB internal storage with expandable storage up to 128GB via sd card. It packs a 2050mAh battery and runs on Tizen OS 3.0, which is developed by Samsung.

The camera on the rear of the device is a 5-megapixel sensor with LED flash and there is a 5.0 megapixel on the front with flash. The device comes with some features that we have seen Samsung J series Smartphones likeS Bike Mode and Ultra Data Saving Mode. The Tizen OS allows using local language with just a swipe on the home screen. The calendar can be automatically synced with future events to give users reminder notifications and access to event updates from the calendar itself. The smartphone will get an additional black back cover inbox.

Let us know what do you guys think of this device and Tizen OS in the comments section. Follow us on twitter for more news and updates.