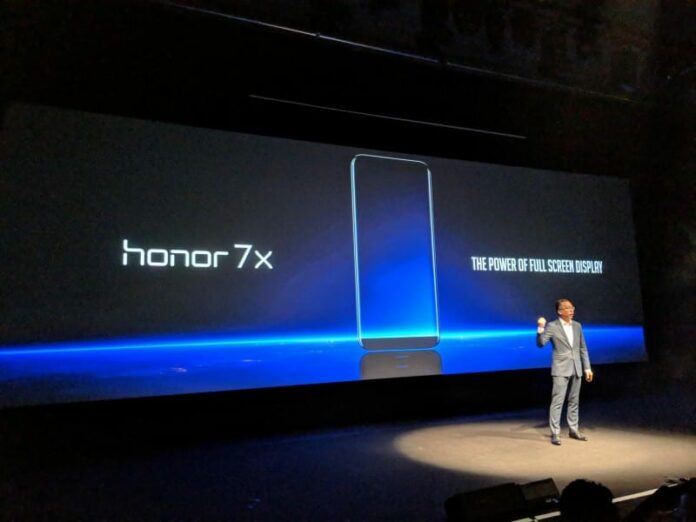 Honor 7X the latest smartphone from the Huawei’s e-brand Honor is the one to reckon with. The smartphone is the successor of hugely popular Honor 6X device from last year. Just like the last year’s 6X, the Honor 7X has ticked all the right boxes with its specs, features, and price. So, let’s have a look at 7 things that make Honor 7X a must buy device –

Apart from being a competitive market, India is also an extremely price sensitive market. Hence, the price makes or breaks a product no matter how good it is. The recent great devices from Sony, LG, HTC have had a tough luck in the market because of their pricing. Luckily, Honor has been able to price most of their device really well and so is the case with Honor 7x. The device which was announced for £269/€299 globally comes with a marginal INR 13,999 price tag only for India.

The @HiHonorIndia launched in London for £299 4GB RAM + 64GB ROM. The phone will be available starting today in Global markets. #MaxYourView #IOOI pic.twitter.com/jkBZPmVPXe

Now, isn’t that a winner already?

In this cluttered smartphone market, Honor and Huawei have always managed to be different from the rest. We have seen some class-leading design in phones like Nexus 6P, Huawei P10, Honor 8 and the exclusive Porsche Design range of Huawei smartphones take it to another level.

Even though, Honor 7X is a budget device it comes with a full metal unibody design and Gorilla Glass protection. And that’s not where it ends, it also is the first smartphone from Honor to come with an Airbag design. No, it’s not similar to the airbags in your car but offers similar protection for all four corners. At the launch in London, George Zhao, President, Honor Smartphones gave a demo by dropping the smartphone not once but twice. The phone handled the drops immaculately and there were no damages. For a bezeless smartphone, it is very important to handle a certain amount of shocks and drops without shattering the screen and Honor 7X takes it easily.

Hence, the result is industry leading across the range of products that come out from Huawei/Honor stable. Be it the starting range Honor 6X or the flagship killer Honor 8 Pro.

Here are some unedited photo samples of the Honor 7X – Now that you have seen how capable the Dual Rear Camera Setup on the Honor 7x is, let’s have a look at the Selfie Camera.

It’s the first time a smartphone maker has cared about us, men. Yes, the Honor 7x comes with Gender specific enhancements so that your stubble face doesn’t look like a waxed rosy plum face. Apart from that users also get Live Cosplay stickers and filters. Huawei and Honor smartphones will always have an advantage over most other Android smartphones thanks to its in-house silicon capabilities. Whilst most companies rely on the likes of Qualcomm and MediaTek, Huawei uses its own Kirin set of processors.

We don’t want to get into a debate about which processor or chipset is better. It totally depends on one device to another. The crux of the matter is that when a company is able to make both the hardware and software in-house it is able to provide better integration, performance, updates, and customizations. And that’s where Huawei and Honor will always have an upper hand with its proprietary Kirin processors and EMUI OS overlay. The 2.36GHz Octa-core Kirin 659 16nm chipset coupled with 4GB RAM takes care of everything you throw at it. In fact, it never feels like an under 15K device when it comes to performance. Honor 7x comes with Android 7.0 out of the box but Android 8 (Oreo) OTA update is expected soon. Like all other Honor phones, the 7x also uses homegrown EMUI OS overlay. This one comes with EMUI version 5.1. The advantage EMUI gets over stock android are plenty but the most important is the camera app on Honor smartphones. The stock Android camera app doesn’t support Dual Camera Lens setup and in-general is too basic even for single camera setup smartphones. These were just 7 things about the newly launched Honor 7x. We will share our in-depth and unbiased review soon for you to learn more about the device. If you have any suggestions, feedback or queries then please leave a comment below or tweet to us on @theunbiasedblog.