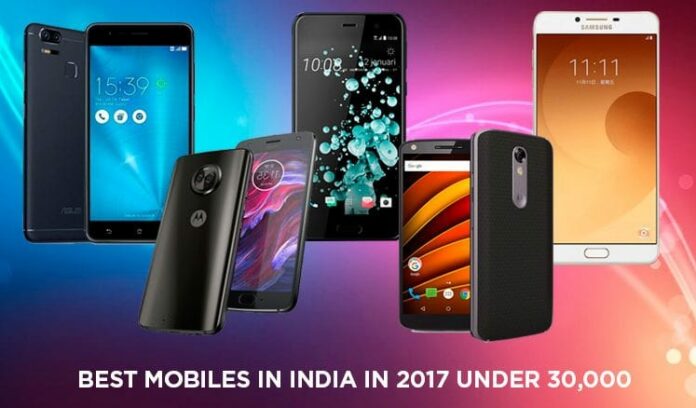 The 30K budget was ruled by OnePlus devices till 2016 but a lot changed in 2017 and we got some great devices to play with. Motorola has 2 great devices, the Moto X4 and Moto Z2 Play to offer in this budget, Honor has the Honor 8 Pro, a device that could finally challenge the undisputed segment leader OnePlus. Check out the complete list to see if we have covered your device on this list.

Motorola’s latest offering in the midrange segment, the Moto X4 comes with IP67 Water and dust resistant which can be seen only in high-end smartphones. This feature sets it apart from other phones in the budget segment. Rest of the specs are also brilliant and this offers value for best value for money and it is available for INR 20,999 for 3GB variant with 32GB storage and the 4GB model with 64GB storage costs INR 22,999 on Flipkart. A selfie-centric smartphone from Oppo, the Oppo F3 Plus comes with Dual Camera set up at the front, one with 16-megapixel and other with 8-megapixel along with flash also it comes with. There is a rear 16-megapixel camera with PDAF and aperture of f/1.7. The device comes with the big 6-inch display with Full HD resolution. It is powered by Snapdragon 653 processor clocked at 1.95Ghz and coupled with Adreno 510 GPU. The device is priced at INR 24,990 on Flipkart. Another one from Moto, the Moto Z2 Play was launched in India in mid-2017 with new moto mods for the price of INR 27,999 on Flipkart. It is sporting a 5.5-inch IPS Full HD display, it is powered by a Qualcomm Snapdragon 626 processor. There are two models options to choose from – 32GB or 64GB storage and 3GB or 4GB of RAM respectively. As we have seen on previous gen Z Play smartphones, the Z2 play also allows attaching Mods at the rear of the device via POGO pins. From modular Moto Z2 Play to weatherproof Moto X4, the under 30K segment has Motorola leading the innovation. But the best value for money smartphone is definitely the Honor 8 Pro with its fantastic set of cameras, powerful specs and great build quality. Do let us know if we missed any smartphone it this list by leaving a comment below or tweeting to us @theunbiasedblog