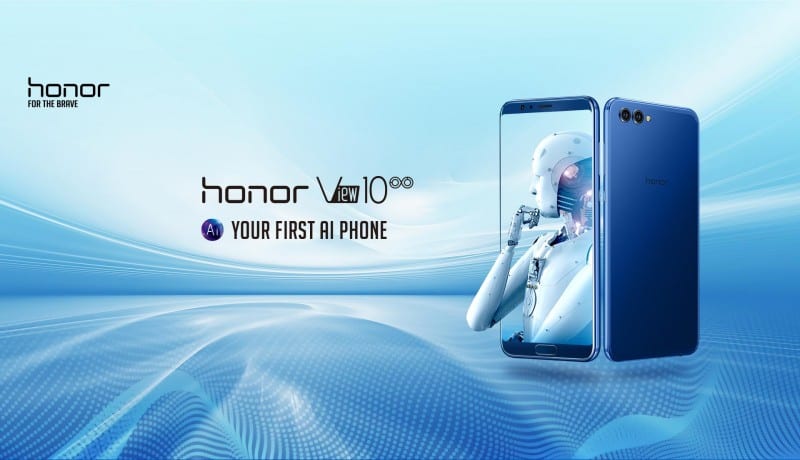 The first Honor AI phone is a mid-range flagship killer!

A few days ago, the Honor View 10, also known as V10 was launched in China, and as expected has been unveiled at a global launch in London.  This device sets itself apart from its other predecessors and also, starts a revolution in the V series. From now on, the V series will aim solely at the mid-tier segment. The smartphone is different because it isn’t like the Honor 7X or the 9i, as the brand has upped the specs, more like the Huawei Mate 10 Series. The Honor View 10 will be available in two colour variants – Navy Blue and Midnight Black and will start shipping in eight different countries, including India, commencing from January 8, 2018. As of now, it is priced at 499 Euros (approximately INR 38,000) for the 6GB RAM, 128GB storage variant and the pricing is expected to change, but will most likely stay below the INR 40000 bracket.

To recap, the Honor View 10 comes with a premium offering, sporting a 5.9-inch FHD+ display (2160 x 1080 pixels) resolution with an 18:9 aspect ratio. Under the hood, it is powered by a HiSilicon Kirin 970 processor, similarly witnessed in the Huawei Mate 10 Series phones. The Kirin 970 chip is the first Neural Processing Unit chip, which features AI functionalities that will enable smart notification lock, recognize the phone user through Facial Recognition, intelligent motion recognition to understand your placement and image to text translation.

#HonorView10 & AI powered Super Image Resolution gives u #Superfied vision at any distance. Are you ready? Join us at https://t.co/SfZ4NEYT3u 😍 pic.twitter.com/S3yPcqWHkx

Moreover, it will be coupled with a 6GB RAM and 128GB of onboard storage, which can be further expandable up to 256GB via micro SD card. Fortunately, it will run on latest version of Android Oreo 8.0 skinned atop with EMUI 8.0 and the battery will be backed by 3750 mAh.

Lastly, the phone comes with a headphone jack and a home button that will double up as a fingerprint sensor. The Honor View 10 is a real steal at that price and could make the OnePlus 5T sweat, as it’s confirmed, it is launching in India. Too early to comment, but we could not ask for more in a smartphone. It’s all that we need. Let us know what you feel? We’d love to hear from you.