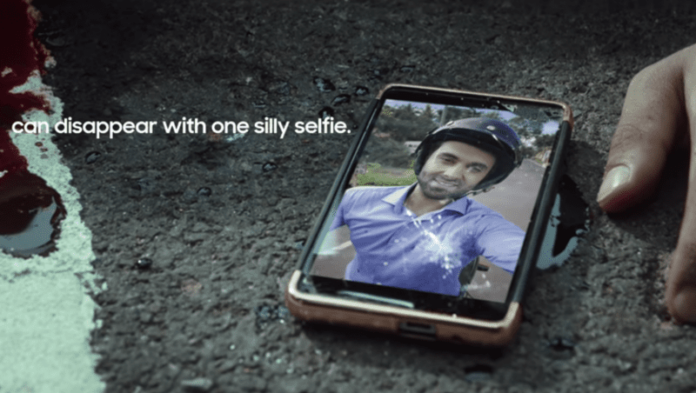 Samsung India has announced the next phase of its ‘Safe India’ campaign to promote responsible use of smartphones, especially when taking selfies, on the road. The second phase of Samsung ‘Safe India’ campaign will roll out in Delhi, Mumbai, Chennai and Lucknow through messages being aired across radio, public information systems and LED walls as well as films and skits in schools and colleges across these cities.

The study conducted across 12 cities in India showed that one-in-three car drivers tend to send a text message from behind the wheel if it were important. Pedestrians’ attitude to safety is no different from drivers, according to the survey the pedestrians who responded, 64% said they regularly answer the phone while crossing a road, while a further 18% said they would immediately respond to a call from their boss, even if crossing a road. 51% of respondents admitted that they would respond to their boss by the third call, even if in the middle of the road.

Shri Nitin Gadkari, Union Minister for Road Transport & Highways, Government of India said, “I am deeply concerned by the fact that India has the highest number of road accidents globally. Irresponsible usage of mobile phones, including taking selfies on the road, is one of the major causes of road accidents. Please use your mobile phone responsibly.”

“Samsung cares for its consumers and the community around it. As a market leader, it is our duty to take the lead and support the Government’s vision of reducing road accidents. We are extremely honoured that the leadership of this country and of the states have extended support to the Samsung ‘Safe India’ initiative, which has gathered pace this year,” said Mr. Deepak Bhardwaj, Vice President, CSR, Samsung India.