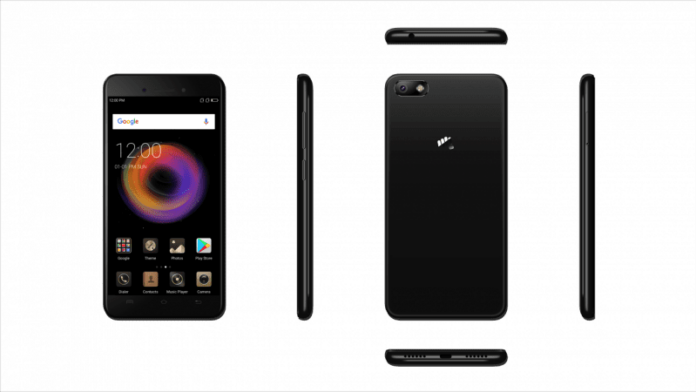 Micromax has announced a new budget smartphone in India that comes with a huge battery and also face unlock feature, making it one of the few smartphones to sport the feature in sub INR 10,000 category. The Micromax Bharat 5 Pro is priced at INR 7,999 and will be available in Black color.

Coming to the specification of the device, up front, the Bharat 5 Pro sports a 5.2-inch HD IPS display and under the hood it is powered by a Quad-core processor clocked at 1.3GHz. It is packed with 3GB of RAM and 32GB of internal storage with microSD card support up to 128GB. The device is running on Android Nougat and is packed with 5,000mAh battery which the company claims can last for more than 2 days and has a standby time of up to 3 weeks / 21 days. Also, the smartphone can be used as a powerbank to charge other devices. In the camera front, it sports a 13MP rear shooter with an LED flash and a 5MP shooter at the front with a selfie flash. Other features of the device include, the face unlock feature, USB OTG support. Also, it is worth mentioning that this device lacks a fingerprint scanner, but the face unlock feature will make up for it for most of the users.

Commenting on the launch, Mr.Shubhodip Pal, Chief Marketing and Chief Commercial Officer, Micromax Informatics said“Smartphones have become a centre of young consumers’ lives to an extent that their life comes to a standstill if their phone is not with them or they give up on them.Data affordability, connectivity and ease of using technology are the three most important parameters for a seamless connected experience. Therefore, majority of our consumers have always demanded a smartphone which helps them get this experience, therefore a smartphone with a great battery life becomes imperative. Usually, smartphones with great battery life either come at a higher price point or do not have great specs to offer at an affordable price point.”

Let us know your thoughts on the Micromax Bharat 5 Pro in the comments section below. For the latest news follow us on Twitter.