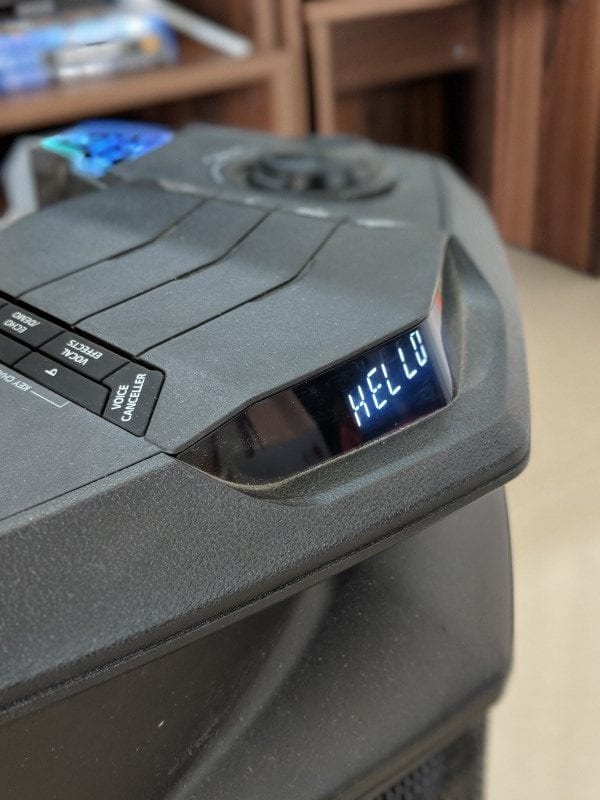 LG X-Boom RK3 aka LG Party Audio RK3 is the boombox we needed in 2018. We tested the LG X-Boom RK3 for over a month and couldn’t find a more versatile portable speaker under 20K. Specs for all the geeks and audiophiles out there –

Now that you guys have read the specs, let’s talk about the design and performance.In terms of design, the LG X-Boom RK3 is very similar to all the X-Boom range that LG has launched over the years. It’s a good thing to see that the LG X-Boom range is available in different price segments. It starts at INR 15,990 for the X-Boom Handy and goes up to INR 49,990 for the LG X-Boom OK99.The top panel of the RK3 speaker is divided into two segments with buttons alongside the body. On both the sides, you get rotatable knobs for adjusting the microphone volume on the left side and the speaker volume on the right side. Either side has buttons for power on/off, vocal effects and echo/demo, key changer buttons, and a voice canceller button for karaoke, a function button to change the input modes, buttons to change the tracks, a reset/repeat button and a sound effect/bass blast button.

Next to all the switches is the handle to pull out the telescopic rod. Close to the handle are the Mic In, USB and AUX-In ports. The front has the 6.5’’ woofer unit under the metallic grille. The rear of the speaker unit has the 12 V/7.0 Ah rechargeable non-removable battery. The battery-charging indicator, power on/off switches and the AC socket for charging are under a rubberized cover. The pull out FM antenna is also concealed near the handlebar. We had mentioned the dimension and weight in the specs but if you missed it. Its dimensions are 370 x 480.5 x 310 (W x H x D) mm and its gross weight is 12.3 kg. Though mostly plastic the build quality is really sturdy. RK3 is cleverly designed for on the go usage so it also has grip areas on both sides to lift it up and move with bare hands. Now, let’s talk about the performance we share our verdict.

You would have already guessed that charging the massive battery would take really long. But, the good thing is you can charge it while you are using it so no need to keep it shut while it charges. The charging time is around 12 hours and the playback time after full charge is around the same time. If you charge it without switching it on, then it charges in 8-9 hours. Similarly, the usage times also depends on what all features you are using like Karaoke etc. In terms, of sound quality, this will not shake your room like the more expensive version of X-boom do but it’s fulfilling enough that you might get a warning from your neighbours if you play it on high volume. As you can play music via different connections like Aux input, Bluetooth, USB and FM. The sound quality will differ based on the source bit-rate.

LG X-Boom RK3 is for those who like it loud! It’s a party speaker which also happens to be portable making it a really lucrative deal. The best part is that the X-Boom RK3 sound good even indoors as opposed to other outdoor party speakers we have tested in the past. Additionally, you get to play with the Karaoke and Vocal effects when indoors. What can be improved is the addition of lights to add to the party feels. Also, the box contents should have a microphone and aux cable included.
With India’s Independence Day just a week away it’s your chance to become the DJ for the day. Here is the link to buy – https://amzn.to/2OCnM2K
Lastly, do let us know this powerhouse that can even work without power 😉 Leave your comments below or tweet to us @theunbiasedblog