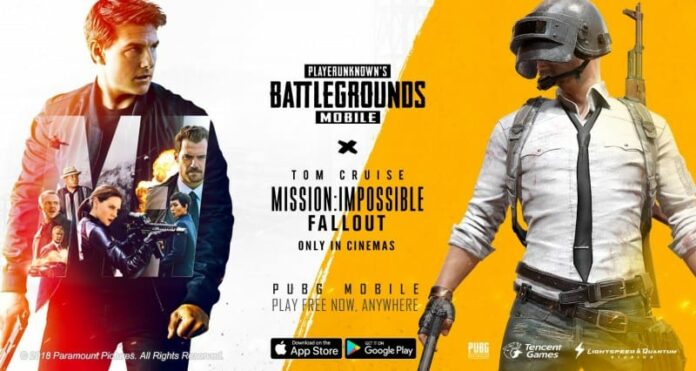 As part of a month-long campaign for PlayerUnknown’s Battlegrounds Mobile (PUBG MOBILE), Tencent Games has partnered with the new movie, “Mission: Impossible – Fallout,” which released in theaters on July 27, to deliver all-new in-game content inspired by the film. This latest update, available now, comes just in time for PUBG MOBILE players.

PUBG MOBILE will feature a “Mission: Impossible – Fallout” in-game theme and several new in-game features with its latest update, including:

Players can experience the world of “Mission: Impossible – Fallout” on their Android and iOS devices in PUBG MOBILE with new items, challenges and other recognizable content straight from the film. The game is available to download for free on the AppStore and Google Play.

Also, you can Invite and team up with your friends, coordinate your battle plan through voice chat and set up the perfect ambush. The powerful Engine 4 creates a visual experience with rich detail, realistic gameplay effects and a massive HD map for Battle Royale. Feel like you’re in the thick of the action as you play with high-quality audio, immersive 3D sound effects and 7.1 channel surround sound.

“Nothing is impossible for PUBG MOBILE, the world’s most popular mobile battle royale game –  not even a partnership with an iconic movie franchise such as “Mission: Impossible,” said PUBG MOBILE team General Manager Vincent Wang. “After only a few months on the market, we continue to build our player base for PUBG MOBILE– now over 100 million strong – while growing our brand with innovative partnerships such as this special in-game event with to appeal to a broad range of gamers worldwide.”