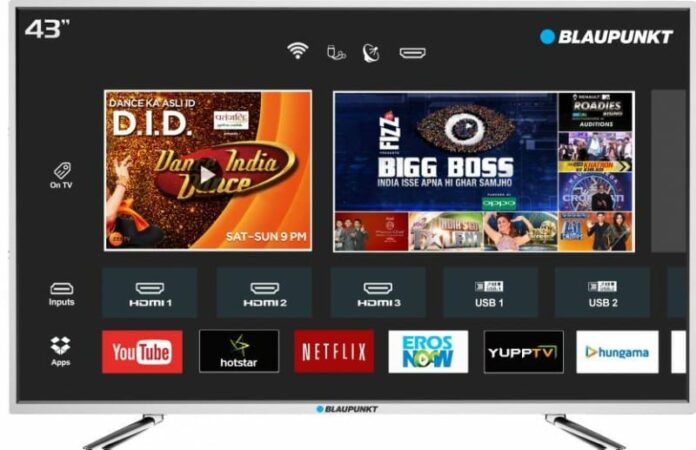 German consumer electronics brand, Blaupunkt announced their arrival to the Indian television market with the launch of eight LED TVs starting at INR 12,999. The brand has an exclusive tie-up with Flipkart and went on Sale on 18th September and received a great response from the consumers.

The company had announced  It is also India’s first voice-enabled android open source television. Blaupunkt TVs come with a Voice-powered Hybrid Launcher, powered by Sensy. This Hybrid Launcher is the first in India to offer voice-support on Android-based Smart TVs and seamlessly integrates the experience for both Broadcast TV and Internet TV. A single Smart Air Remote can be used to operate your Set-top Box and Apps – through your voice. The launcher supports thousands of TV operators in India, and TV Apps can be easily loaded into the Android-based Smart TV. The Hybrid Launcher works well with Amazon’s Alexa and Amazon Echo devices. With the upcoming skill for Alexa, users can simply ask Alexa to switch to their favorite channels, without even touching a remote. To use Blaupunkt TVs with Amazon Echo devices or the Alexa app, just enable the Sensy skill on Alexa. Then users can say, “Alexa, open Sensy”, and then control their Blaupunkt TV with commands like:

The Hybrid Launcher’s AI engine constantly learns user preferences for content on TV and recommends the most appropriate shows to the viewer, whether from Broadcast TV or Internet TV. Support for Indian languages is something Blaupunkt is working upon. Follow us on Twitter for more news and updates.