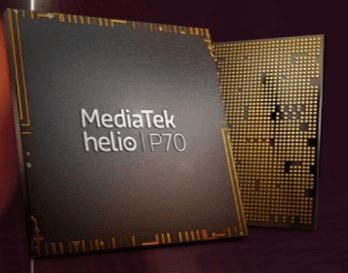 When it comes to Smartphone SoC makers, there are only two Big names- one is Qualcomm and the other is MediaTek. A couple of days ago Qualcomm announced Snapdragon 675 for mid-range devices. Today, MediaTek has unveiled Helio P70 with Advanced AI, enhanced camera features for mid-range devices. The Helio P70 will be the successor to the P60, which was announced earlier this year.

The Helio P70 is built with TSMC’s 12nm FinFET technology and features a multi-core APU operating at up to 525 MHz. It is packed with four Arm Cortex-A73 2.1 GHz processors and four Arm Cortex-A53 2.0 GHz processors in an octa-core big.LITTLE configuration. For an additional power boost, the chipset has an improved Arm Mali-G72 MP3 GPU operating at up to 900 MHz, which provides a 13% performance improvement compared to the Helio P60. To being the fluid experience to the gaming, which is going mainstream thanks to games like PUBG, Helio P70 GPU is optimized to reduce frame-rate jitter and improve latency for touch controls and display visuals for a smooth, fluid gaming experience.

The Helio P70 number AI-infused photo and video experiences including real-time beautification, scene detection, and artificial reality (AR) capabilities. The chipset features improved deep-learning facial detection with up to 90% accuracy. The chipset will support up to 32MP single camera, or 24+16MP dual cameras.

The Helio P70 is in mass production now and is expected to be available in consumer devices by November of this year.