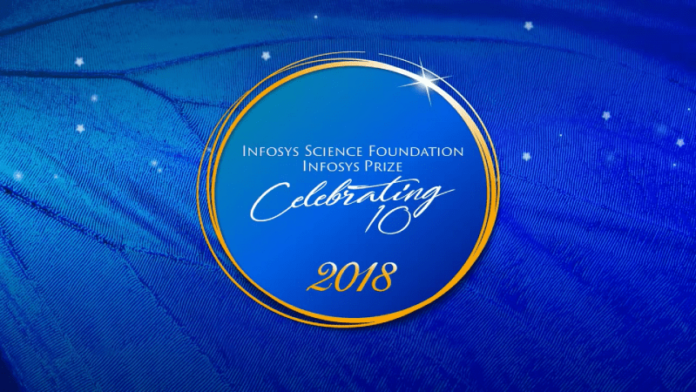 Infosys Science Foundation (ISF) celebrated its 10-year milestone and announces the winners of the Infosys Prize 2018 in six categories – Engineering and Computer Sciences, Humanities, Life Sciences, Mathematical Sciences, Physical Sciences, and Social Sciences. These Prizes are given annually to celebrate the success of the recipients in science and research by recognizing their achievements in each category.

The prize carries a pure gold medal, a citation, and a prize purse, the amount for which has been increased to US$100,000 (or its equivalent in Rupees) this year, tax-free in the hands of winners in India. Infosys Prize laureates have achieved prestigious milestones in their domains. By recognizing these outstanding researchers and celebrating their achievements, the Infosys Prize aims to inspire young minds to explore science as a career option and advance innovation in the country.

Here are the winners of the Infosys Prize 2018:

The Infosys Prize 2018 for Engineering and Computer Science is awarded to Navakanta Bhat, Professor, Indian Institute of Science, Bangalore and Chairperson, Centre for Nano Science and Engineering, IISc for his work on the design of novel biosensors based on his research in biochemistry and gaseous sensors that push the performance limits of existing metal-oxide sensors. The prize recognizes his efforts to build a state-of-the-art infrastructure for research and talent training in nanoscale systems and for developing technologies for space and national security applications.

The Infosys Prize 2018 for Humanities is awarded to Kavita Singh, Professor and Dean, School of Arts & Aesthetics, Jawaharlal Nehru University, New Delhi for her extraordinarily illuminating study of Mughal, Rajput and Deccan art, as well as her insightful writing on the historical function and role of museums and their significance in the increasingly fraught and conflicted social world in which visual culture exists today.

Prof. Singh’s work shows the significance of museums in highlighting the social impact of art and thereby relates visual culture to large contemporary questions of secularity, modernity, and political conflict, including the conflicts around repatriation that have been generated by a colonial past. The Infosys Prize 2018 for Life Sciences is awarded to Roop Mallik, Associate Professor, Department of Biological Sciences, Tata Institute of Fundamental Research, Mumbai for his pioneering work on molecular motor proteins, which are crucial for the functioning of living cells. Mallik has identified and measured forces needed to transport large particles inside cells and demonstrated their role in fundamental processes such as targeting pathogens for their destruction and moving lipid droplets for fatty acid regulation in the liver.

Conditions such as obesity and diabetes are straining healthcare systems around the world. Along with medication, understanding the metabolic processes at the cellular level is crucial, if we are ever to find a solution. Among other things, Prof. Mallik’s research provides insights that will improve therapies for such diseases.

The Infosys Prize 2018 for Mathematical Sciences is awarded to Nalini Anantharaman, Professor and Chair of Mathematics, Institute for Advanced Study, University of Strasbourg, France for her work related to “Quantum Chaos”, specifically for the effective use of entropy in the study of semiclassical limits of eigenstates in quantum analogs of chaotic dynamical systems and for her work on the delocalization of eigenfunctions on large regular graphs.

The quantum world is one of the deepest secrets of the universe and mathematics is the language that helps us understand this world. Mathematicians and physicists have been trying for decades to unravel the mysteries of this subatomic world. Prof. Anantharaman’s work impressively explores the deep relationship between classical and quantum systems and the unexpected use of entropy to prove some of the hard results.

The Infosys Prize 2018 for Physical Sciences is awarded to S.K. Satheesh, Professor, Centre for Atmospheric & Oceanic Sciences, Indian Institute of Science, and Director, Divecha Centre for Climate Change for his pioneering scientific work in the field of climate change. His studies on black carbon aerosols, the dark, light absorbing, microscopic particles in the air which greatly influence the energy balance of the atmosphere over the Indian subcontinent, have enabled a better understanding of the role of these particles on climate change, precipitation, and, human health in the Indian subcontinent.

Prof. Satheesh’s work on measuring, quantifying, and analyzing the impact of black carbon aerosols is important to not only climate science but also to the society that has to mitigate and cope with climate change, possibly the most important threat to humanity.

The Infosys Prize 2018 for Social Sciences is awarded to Sendhil Mullainathan, University Professor, Professor of Computation and Behavioral Science, and George C. Tiao Faculty Fellow, The University of Chicago Booth School of Business for his path-breaking work in behavioral economics. Mullainathan’s research has had a substantial impact on diverse fields such as development, public finance, corporate governance, and policy design. A significant part of this work is relevant to India. He is currently working on big data and machine learning issues and applications in economics.

Prof. Mullainathan is a very versatile economist who uses his training in computation and the developments in machine learning and big data to develop guidelines in the field of empirical methodology for the future. This computational ability combined with his use of behavioral psychology in analyzing economic phenomena make him creative and unique.