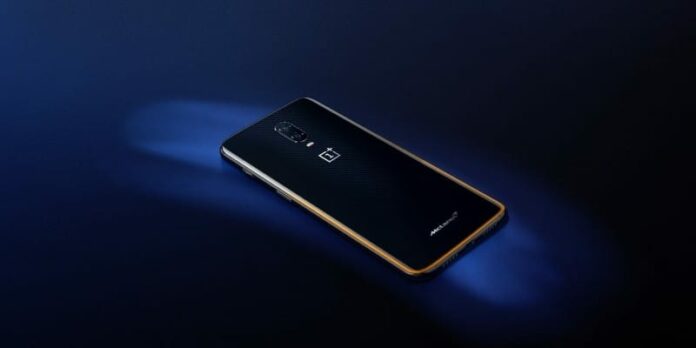 OnePlus had just announced the special McLaren Edition of the recently launched flagship- OnePlus 6T. The OnePlus 6T McLaren Edtion is made in partnership with McLaren which marks the start of a long-term partnership, celebrating  two brand’s philosophies – to “Never Settle” and to move “Fearlessly Forward.”

Another change is in the look, the McLaren Edition comes with signature McLaren color, Papaya Orange races around the bottom edge of the device before fading into the black. The pattern underneath the glass back of the phone is based on McLaren’s carbon fiber, the technology at the heart of all McLaren cars since 1981 when it was introduced to the Formula 1 car design, before being integrated into McLaren road cars in 1993. While light streaks across the McLaren logo, illuminating and disappearing in an instant. The Warp Charge 30 power unit includes a Papaya Orange braided cord cable. OnePlus and McLaren are giving a great box content-  in the box is McLaren’s logo, the iconic Speedmark, recreated in McLaren-designed F1 AA grade carbon fiber – the same material used in the McLaren MCL33 2018 Formula 1 car.

The device will be available in Western Europe and North America on December 13 for £649. The McLaren Edition is launching in Indian tomorrow, we should know the Indian price at the event.

The OnePlus 6T McLaren Edition is stunning. Engineered with exact precision and new technology we’ve never used before, it’s our fastest, most cutting-edge device ever – the epitome of craftsmanship” said OnePlus CEO Pete Lau. “It’s the start of an exciting partnership with McLaren, giving people a feeling of incredible speed and performance.