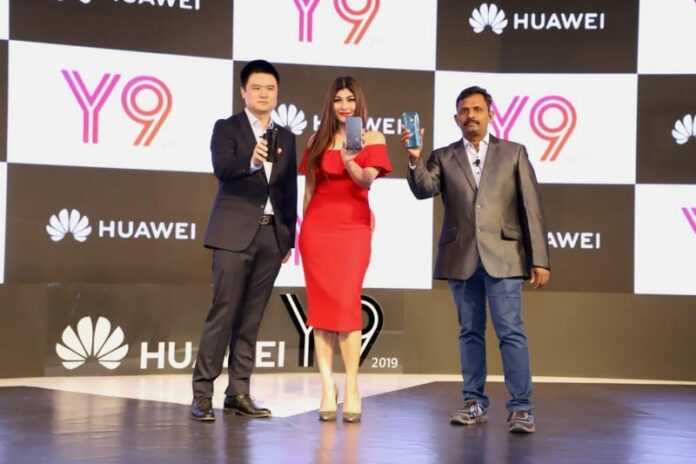 Huawei has announced a new mid-range smartphone to the Indian smartphone market as reported earlier. The all new Huawei Y9 2019 comes with a big 6.5-inch notched display, Kirin 710 SoC, four cameras, 4000mAH battery and it will be exclusively available on Amazon.

The Huawei Y9 2019 sports a 6.5-inch display up front with Full HD+ (2340*1080 pixels) and 3D curved glass and also features a notch up top with 19.5:9 aspect ratio. Under the hood, it is powered by the in-house Kirin 710 Octa-core processor clocked at 2.2GHz and ARM Mali-G51 MP4 GPU. The device comes in only one variant- 4GB+64GB with microSD card support up to 400GB. The device comes with GPU Turbo technology which doubles the GPU efficiency and increases basic performance by 1.3x. It packs in a 4000 mAH battery with AI power management and is running on Android 8.0 Oreo based on EMUI skin.

Coming to the camera department, the Huawei Y9 2019 is pretty much similar to the Honor 8X but, this comes with a 16MP main camera with an f/1.8 aperture at the rear as opposed to the 20MP primary sensor on the Honor 8X and a 2MP secondary rear camera. The rear camera supports PDAF, AI 3D lighting, Pixel 4-in-1 intelligent algorithm to create beautiful selfies even in low-light or backlighting conditions. One more addition on the Huawei Y9 2019 is the inclusion of the secondary selfie camera on the front, making it a 13MP+2MP selfie shooter with f/2.0 aperture. Both the front and the rear cameras support AI features with AI scene recognition that can identify up to 500 scenes.

The Huawei Y9 2019 is priced at INR 15,990 and is exclusively available on Amazon starting from 15th January.