The Honor Band 5 features a 0.95-inch(240x120p) AMOLED 2.5D curved glass color display. It is a touch screen panel and also comes with a home button just below the display. Over at the rear, it features a continuous heart rate monitor. It is also water-resistant up to 5ATM / 50 meters so, you can take it to a swim. The Honor Band 5 will automatically track the user’s daily activity like running, swimming, cycling, and more. The band also packs in SpO2 sensor to monitor blood oxygen levels and packs in 6-axis sensors to monitor and professionally manage the running postures.

With the TruSleep 3.5, it identifies common sleep-related issues and provides more than 200 potential suggestions to help you sleep better. Also, the watch will show notifications of any messages, phone calls, alarms or set reminders. It has a built-in 100mAH battery which will last up to 2 weeks with a single charge and it can be charged via the proprietory charger provided in the box. The band weighs only 23g and comes in Balck, Blue, and Pink color options. 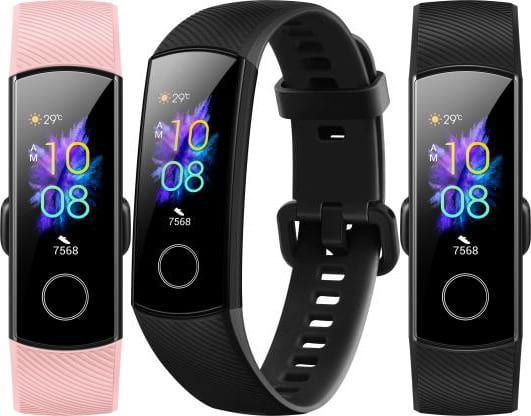