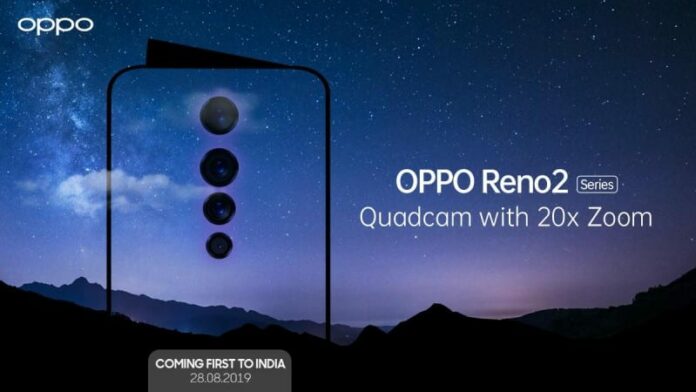 OPPO is all set to announce the second generation of Reno smartphone series on August 28th. The company will be unveiling the Oppo Reno2 series smartphone in India before anywhere else. The OPPO Reno2 will be the successor to the OPPO Reno series which had a regular OPPO Reno and OPPO Reno 10x zoom, which was launched in May.

The company has posted a teaser on Twitter and other social media pages that states ‘OPPO Reno2 series‘, ‘Quadcam with 20x Zoom‘ that means the device will come with a quad-camera setup at the rear. Also, the teaser gives a hint on the front camera which will most likely be the same side-raising front like a shark fin. As there is no hint of the fingerprint scanner at the rear the device will pack in the In-display fingerprint scanner similar to the OPPO Reno.

There are no further details on the Reno2 yet but, we expect it to pack in AMOLED display, Snapdragon 855/855+ processor, up to 8GB RAM, and VOOC flash charge capabilities. More details shall be seen on the launch day, i.e, August 28.