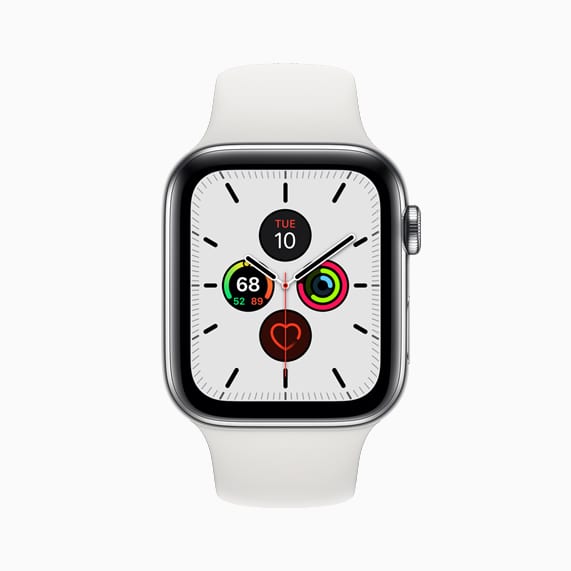 Along with the announcement of the new 7th gen iPad, Apple also announced the next-gen wearable device, the Apple Watch Series 5. The new Apple Series 5 smartwatch comes with an Always-On Retina display, a built-in compass, New location features, watchOS 6 and much more.

Apple Watch Series 5 features a new Retina display that allows the time and important information to remain visible at all times. All watch faces have been optimized for the new display and to preserve battery life, the screen intelligently dims when a user’s wrist is down and returns to full brightness with a raise or a tap. The combination of hardware and software allows Apple Watch Series 5 to offer up to 18-hour battery life. Further, Location features on Apple Watch Series 5 provide users great navigation tool. The new built-in compass and updated Maps app allow users to see which way they are facing. The new Compass app helps to see the heading, incline, latitude, longitude, and current elevation. Users can even add one of three new Compass complications to their watch face to see direction at a glance.

For personal safety, while traveling, users with cellular models of Apple Watch Series 5 can now complete international calls to emergency services, regardless of where the device was originally purchased or if the cellular plan has been activated. International emergency calling also works with fall detection, if enabled, to automatically place an emergency call if Apple Watch senses the user has taken a hard fall and remains motionless for about a minute.