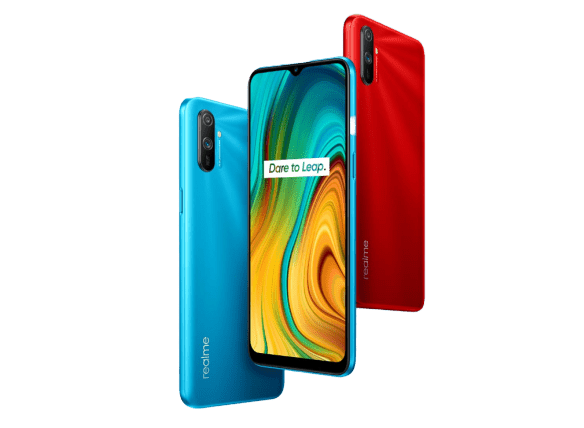 Starting off with the display, the Realms C3 flaunts a 6.5-inch HD+ display with dewdrop style notch, 20:9 aspect ratio, 89.8% screen to body ratio upfront. Under the hood, it is powered by an Octacore 12nm MediaTek Helio G70 processor clocked at 2GHz coupled with ARM G52 GPU. It will be available in two variants – 3+32GB and 4+64GB with microSD card support. To power all the internals, the Realme C3 is backed by a big 5000mAH battery with 10W charging support via micro USB slot. Coming to the software might front, this device is Realme’s first smartphone to run on Realme UI based on Android 10 out of the box.

On to the optics, the handset features a dual rear camera with a 12MP primary sensor and a 2MP depth sensor along with an LED flash. Over to the front, there is a 5MP shooter. Other features of the device include Dual SIM, 4G VoLTE, Wi-Fi 802.11b/g/n, 2.4G, Bluetooth 5.0, splash-proof design and face unlock as the device lacks a physical fingerprint scanner.

The Realme C3 will be available on Flipkart and Relame.com starting February 14, 2019. What do you think of this new Realme C3? Drop a comment and let us know, follow us on Twitter for more news and updates.