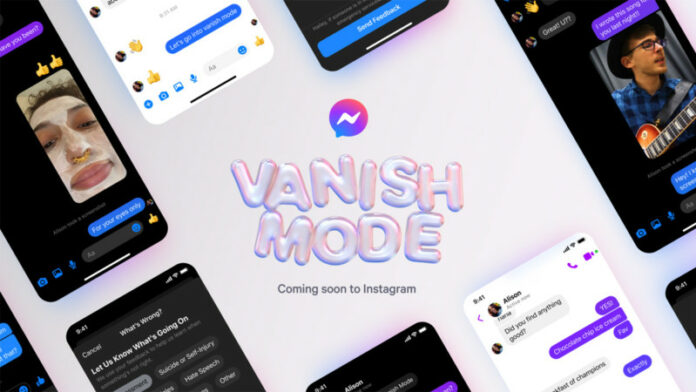 Facebook’s Vanish Mode, a Snapchat signature feature has started to roll out on Messenger and Instagram. Announced previously as part of its prominent September redesign of Messenger, Vanish Mode is a temporary messaging style for both Facebook’s Messenger and Instagram; letting users send texts, photos, voice messages, emoji, and stickers that disappear immediately once they’re viewed by the other person and the chat window has been closed.

While some users may have already discerned the Vanish Mode in the chat settings on Messenger, as it has been rolling out in stages to a particular set of users since the redesign was announced. Also on Instagram, some parts of Vanish Mode are already a part of the core direct messaging features, such as disappearing photos and videos once a piece of media has been viewed on Instagram.

The Vanish Mode is much similar in ways to Messenger’s existing secret conversation mode; letting users enter an end-to-end encrypted chat that’s saved only on the device. However, this new mode has been designed to delete anything that has been sent for forever once it’s viewed.

For Facebook, temporary messaging still describes a way to attract younger smartphone users who have crowded to chat apps and platforms where they don’t have to post their photos and videos publicly and risk being haunted. While Snapchat has already been popularizing this kind of messaging among US teens, Facebook has since fostered quite a few of the features from Snapchat and implemented them throughout Instagram, Messenger, and WhatsApp for users of all age combinations around the world. 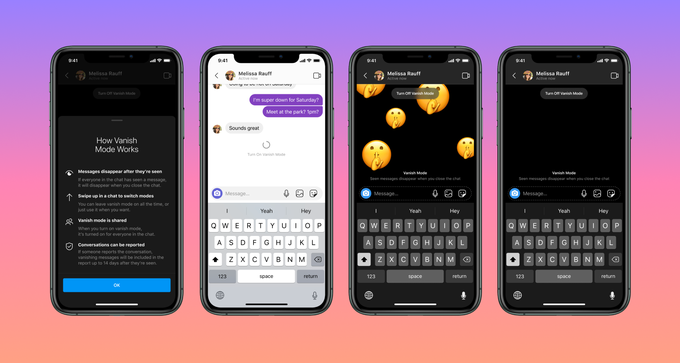 Vanish Mode will arrive in both apps as a discrete option which the users can turn on and off in the settings of any special chat message. One can also enter the Vanish mode by swiping up on a chat window; doing this will then enable disappearing messages and other chat interactions, with the opportunity to turn it off placed at the top of the chat window or by swiping down over.

Additionally, Facebook says the mode will be available for users using an opt-in only, implying one will have to agree to enter Vanish Mode once another user in the chat has enabled it. Similarly, Messenger and Instagram will also notify you when a screenshot of a chat is exercised while the mode is enabled. Adding to it, Facebook also says that one can report individuals over Vanish Mode chat conduct, although it’s unclear how much of the talk Facebook will be able to review for violations.

Vanish Mode should be available for Messenger in the US as well as some other nations starting today, Facebook says. And it will go live on Instagram in the US and other countries in the following period.