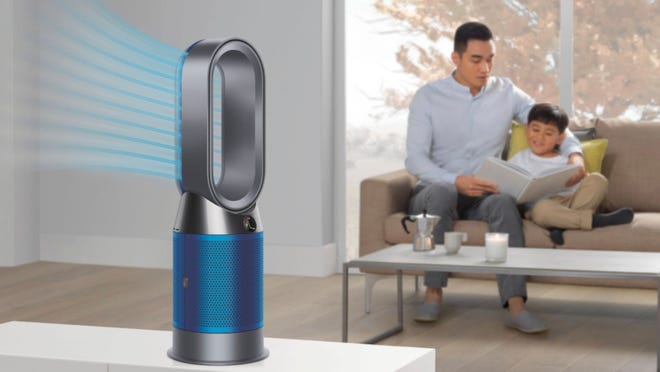 From cooking at home to yoga in the park and a picnic with her daughter, Dyson’s prototype air quality backpack tracks air pollution exposure throughout the daily routine of Delhi-based mum Karuna Chauhan. Karuna is one of a group of volunteers and journalists globally who are working with Dyson to raise awareness about air pollution in cities across the world. This latest project is part of a sustained effort by Dyson to educate individuals about air quality and empower people to take control of their pollution exposure.

Karuna wore the backpack on October 03 (Phase 1), and then again on November 08 (Phase 2), repeating the same activities and routine in each phase to allow for a comparison of the two time periods. In November, the deterioration in air quality was visible with a thick smog descending on the city.

On her involvement in the project, Karuna said: “The reality of air pollution hits homes every year with the onset of winters, which bring a thick smog cover, making it a hazard for everyone. The importance of the air that my family and I are breathing in everyday convinced me to be a part of the Dyson backpack project. Understanding the air quality outdoors and inside my home is the first and the most important step in taking precautionary measures.”

Karuna’s Phase 1 data highlights how air quality can be impacted by daily activities. Actions like frying food in the kitchen caused a 5x increase in PM2.5, while visiting an outdoor market caused NO2 levels to rise to 2,500ppb, which registers as very poor on the Dyson AQI scale . The combustion process while cooking releases particulates into the air, likely contributing to this increase. Karuna’s exposure to PM2.5 and NO2 pollution peaked while she was driving on the Expressway. This is unsurprising as these are pollutants commonly associated with vehicle emissions as well as brake and tyre wear.

Pollution levels remained high when Karuna visited a city park to do some yoga, highlighting that green spaces within cities can still be impacted by city pollution due to their proximity to pollution sources like vehicles and construction. In Phase 2, outdoor PM2.5 exposure averaged at 220ug/m³ which is extremely poor on the Dyson AQI scale, while monitoring stations across Delhi registered an average of 330ug/m³ which corresponds to severe on the same scale.

However, during Phase 1, when Karuna went to visit Lodhi Garden, her personal exposure to pollution reduced to the good range of 25ug/m³, indicating that choices and behaviour can have a positive impact on reducing overall exposure when there is not a city-wide pollution event.

Within the home, Karuna’s usage of aerosol products like deodorant and perfume caused exposure to VOCs. VOCs is a collective term for thousands of different chemicals, often associated with common household items like aerosols and cleaning sprays. Opting for non-aerosolised alternatives or ensuring good ventilation when the outside air is clean are ways to help reduce exposure to these pollutants.

When Karuna opened the balcony window after cooking to ventilate the indoor space, PM2.5 levels remained fair at 40ug/m³. This is likely because of the presence of PM2.5 pollution outdoors which meant that the indoor air was not being replaced with a cleaner alternative. Although there are sources of pollution both inside the home and outdoors, where outdoor air quality is bad, opening windows to ventilate a space can negatively impact indoor pollution levels. At 21:00 each, evening Karuna switched on her Dyson air purifier, causing a gradual improvement in air quality.

When asked about the impact of Dyson’s findings, Karuna said: “We are all aware that air pollution exists. While I did expect the outdoor air quality to be better in October than in November, the insights on the indoor air quality that really surprised me. A lot of everyday things like cooking and applying colognes can cause a spike. Through certain behavioural habits, like a morning walk or doing yoga outdoors, we might be causing ourselves more harm than good. While some things are out of our control, particularly if the spike in air pollution has been caused by a citywide trigger, there are things which we can control by changing our behaviour habits, and making informed decisions to reduce our exposure to air pollution”

The air quality backpack was initially developed by Dyson engineers for the Breathe London study with Kings College London and the Greater London Authority. The study involved 258 children in 5 schools in London, and sought to understand exposure to two pollutants, fine particulate matter (PM2.5) and nitrogen dioxide (NO2), on the school run. As a result of the study, 31% of the children said they would change the way they commute to and from school to reduce their exposure to air pollution.