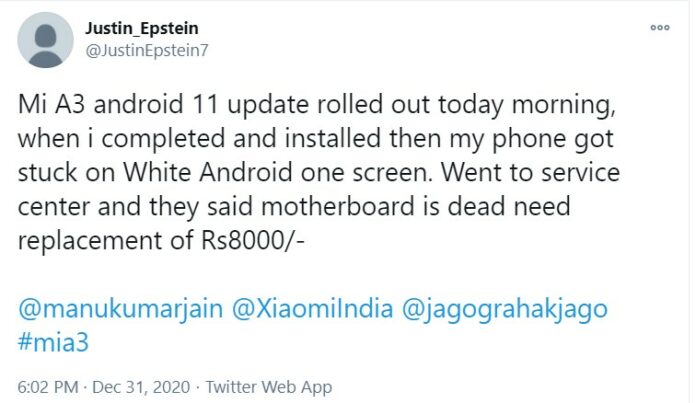 Yesterday, we covered a story where we mentioned the issue with the Android 11 update being rolled out for the Xiaomi Mi A3 users. There have now been some shocking developments regarding the same case, where users upon taking their bricked Mi A3 smartphones to the service centre have been asked to pay amount varying from Rs.6,000 to Rs.12,000 for a solution to the problem.

Users have taken to social media to express their anger towards the company, after Xiaomi rolled out an update with a bug causing damage to the smartphones, and moreover asking users to pay for the service of the same. According to a thread on Reddit, the smartphone didn’t even turn on in the bootloader mode or wake up when it is connected with a PC, certainly bricking their devices.

“My Mi A3 was dead after downloading Android 11,” an affected user wrote to the Xiaomi India support account on Twitter. “I visited your service centre. They are unable to fix my phone.”. Another user on Twitter mentioned that the service centre charged him an amount of INR.11796, for service after the upgrade. Interestingly, as per the image attached by the user, the service request slip mentioned “Liquid Damage”.

@Xiaomi @ashishnayakone @gsmarena_com
After updating mia3 to android 11, my phone was not turning on. Went to service center. They harrassed me for 2 hours and asked for rs 11796.
Xiaomi should be banned in india pic.twitter.com/4keZTNmcB1

Moving forward, some users have taken it another step forward and created a petition on Change.org requesting the company to fix or replace their damaged smartphone for free due to the buggy Android 11 update. However, a Xiaomi Global employee took to Twitter to mention “Hello sir, sorry for the inconvenience. I would like to inform you that it’s already reported to the developers. Users whose devices were bricked, kindly visit your nearest MI service centre for further assistance.”

Hello sir, sorry for the inconvenience. I would like to inform you that it's already reported to the developers. Users whose devices were bricked, kindly visit to your nearest MI service center for further assistance.

We are waiting for an official statement from the company regarding this and will update our readers with any information at the latest.