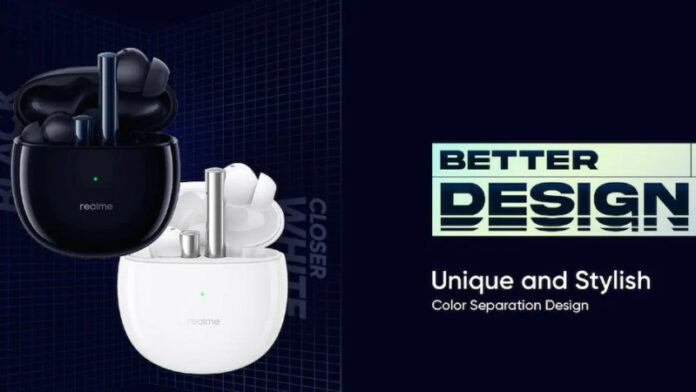 The Realme Buds Air 2 has been teased to come with 25-hours of battery life. We do not know much about the specifications, but all the specifications would be disclosed on February 24 at 12.30 pm IST. For this launch, the company has also collaborated with the Chainsmokers band.

According to the teased specifications, these Buds Air 2 will be housing an Active Noise Cancellation and 10mm, diamond-class Hi-Fi drivers, as well. Moving on to the design according to some leaks, we can expect them to be very identical to the Realme Buds Air Pro that was launched earlier.

Realme has got a special page for the Realme Buds Air 2, that tells more about the buds themselves and also their collaboration with The Chainsmokers. Users can visit the special page from here. These TWS look similar to the Realme Buds Air Pro that was the previous TWS launched by realme. According to some teasers, it is safe to say that these earbuds would come in Black and White color options. As said previously, these buds would offer 25 hours of total playback with ANC off, but that kept on, they can last up to 22.5 hours which is according to the company’s claims. They also claim that the buds could charge in just 10 minutes and then could deliver two hours of playback.

Other than that, it is also teased that these buds would include 88 milliseconds latency in the gaming mode for a better gaming experience. There would be 10mm diamond class Hi-Fi drivers, which are said to enable richer bass, clearer sound, and better frequency response. Moving on, now for the ANC that is rated at 25dB which is yes, slightly lesser than the 35dB ANC that was being offered by the Realme Buds Air Pro.

Well with that said, do let us know your opinions on the Realme Buds Air 2, by dropping a comment down below.