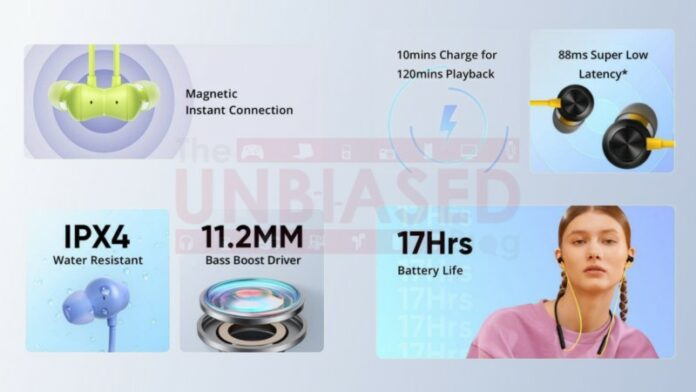 The name of these new and upcoming name is Buds Wireless 2 Neo, and it carries the model number RMA2011. It has been previously spotted on the FCC certification website too.

The Buds Wireless 2 Neo feature 11.2mm bass boost drivers, and a 150mAh battery unit withs up to 17 hours of music playback. It supports Bluetooth 5.0 Dual Mode and features IPX4 water-repellant rating. These Buds Wireless 2 Neo are available in Blue, Green, and Black colour variants, so that users get a whole bunch of colour options.

They have been revealed on the Sri-Lankan website, and according to the website, these also carry 88ms low latency which means that these Buds could be a great choice for gaming. Realme had always focused on the latency, as they want the users to get a better gaming experience, however, we’ll have to see if they do that this time too. The website also reveals the stuff that we’d get in the box and also the charging time of the Buds Neo 2.

For the in-box contents, there would be the Buds themselves, then there would be a total of 6 ear tips which is good to see and along with that, there would be a user manual too. In the end, we also get a USB Type-C port instead of a Micro USB one. The charging times that are mentioned seems to be good, as according to them, the Buds can play for 120 minutes when given a 10 minutes charge. There isn’t any mention of the pricing, but we expect them to be priced around Rs 2,000 and they would compete with the Bullet Wireless Z and Enco M31. While there isn’t any other info available on site, this is what we know till now about the Buds Wireless Neo 2.

Well with that said, do let us know your opinions on this post-Realme Buds Wireless Neo 2 specification leaked, to be launched soon by dropping a comment down below.