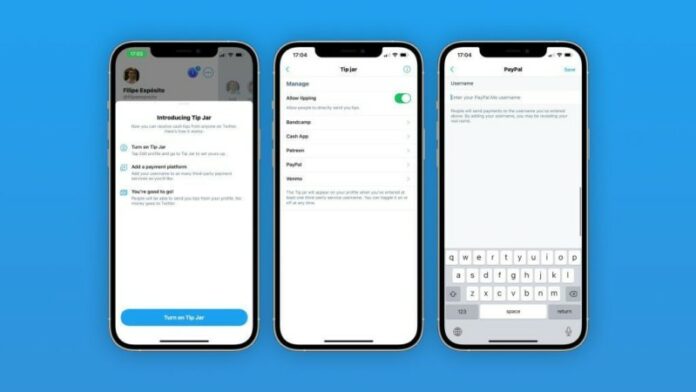 Twitter begins rolling out the new ‘Tip Jar’ feature to pay other users directly. According to the developers, this feature is for those people who inform, entertain, and even have moved by conversations taking place on the Home timeline and in Twitter Spaces. Twitter is making it easier to support the people leading those conversations.

For setting up Tip Jar, users would need to go to Edit Profile on iOS or Android. Then tap Tip Jar, which is off by default. You will be brought to the Tip Jar settings screen. Toggle Allow tips to on and then choose the third-party service you’d like to use. Add in your third-party service username. You will need to have at least one username entered for your Tip Jar to appear on your Twitter profile.

When you add a third-party payment service to your profile, please note that your username on that service will be publicly linked to your Twitter account. Information about you, including your full name or address and your tip, may be shared with the recipient or others.

Well with that said, do let us know your opinions on this post Twitter begins rolling out the new ‘Tip Jar’ feature to pay other users directly by dropping a comment down below.