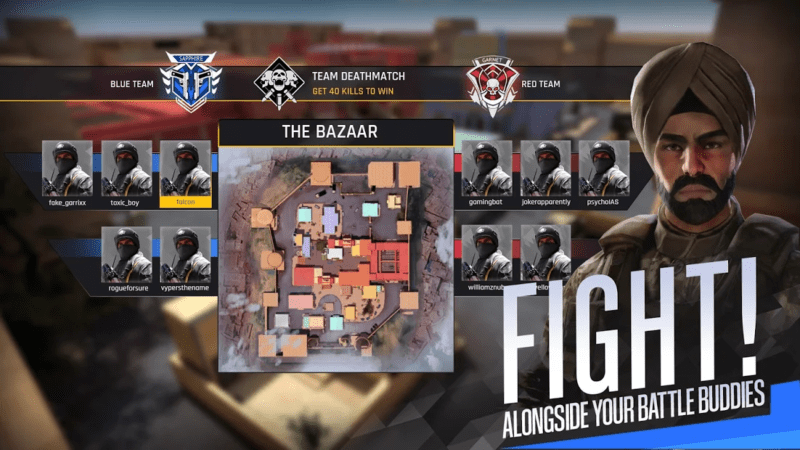 FAUG 5v5 Multiplayer Deathmatch released in close beta on Play Store. Although it was said that the Deathmatch mode would be included in the previous game only, the Team Deathmatch mode comes in a separate game instead. The development was shared by actor Akshay Kumar on Twitter and the game currently is in beta and there are a limited number of slots for players to check it out.

This new FAU-G: Multiplayer mode is currently only available on Google Play and there is no closed beta for iOS users. As for the Deathmatch mode itself, the game brings a 5v5 Team Deathmatch mode with a new map called The Bazaar, and it seems to be similar to what we have seen with the TDM mode in PUBG Mobile.

Upon further investigation, we found that they have uploaded a game description too and that reads the following, “Choose from a range of lethal weapons and experience a soldier’s thrill and adrenaline rush at the forefront of battle! Experience fast action-packed gameplay in a closed sandbox with 5 opposing combatants and real-world inspired weapons.”

This game has also been developed by the same team of nCore Games which announced FAU-G back in September last year and the game was released on January 26. The game got bad reviews at the time of the launch as there was only a single-player campaign with a promise of ‘Free for All’ and a 5v5 ‘Team Deathmatch’ mode coming soon. Now that there is finally the 5v5 ‘Team Deathmatch’ mode it would be interesting to see if the Gamers like this mode or not, the link for the Closed Beta is mentioned below so that you can try out the new Multiplayer mode itself.

Well with that said, do let us know your opinions on this post-FAUG 5v5 Multiplayer Deathmatch released in close beta on Play Store by dropping a comment down below.