The Unbiased Blog
Home News Assemble with Care on Apple Arcade: Invigorated the tinkerer in me –... 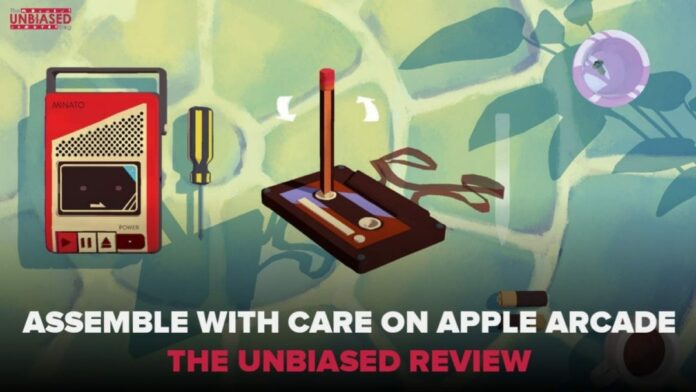 As I started to write this piece, I realised how fortunate I have been to have experienced gaming from all eras, be it the Atari my dad got me in the 90’s when I was 5 years old to the latest PlayStation 5 that I got recently. I mean, I’m that 90’s kid who spent hours playing RoadRash, Prince of Persia, Doom, Cricket 97 and many other 90’s titles on his PC. And how we sneakily installed Call of Duty on all the computers in the school’s computer lab to enjoy LAN gaming for the first time ever. Nostalgic eh?

From that to now playing games like Fortnite, Fallout shelter, Beyond a Steel Sky, and Call Of Duty (mobile) on iPhone and iPad with the same school friends. We have come a long way and so has the way we game. We live in world of multiplayer games that have players from across the world connected and playing games at different timezone on a handheld device – PUBG Mobile, Fortnite, CoD Mobile are examples of few such games.

And then there are games like Monument Valley that are a piece of art. I have always been intrigued by puzzle games and when you add a good soundtrack and visuals to it, they just become an art. So while searching for more such games, I came across a game called Assemble with Care on Apple Arcade. Just look at the launch screen below and aren’t you wondering what is it about? 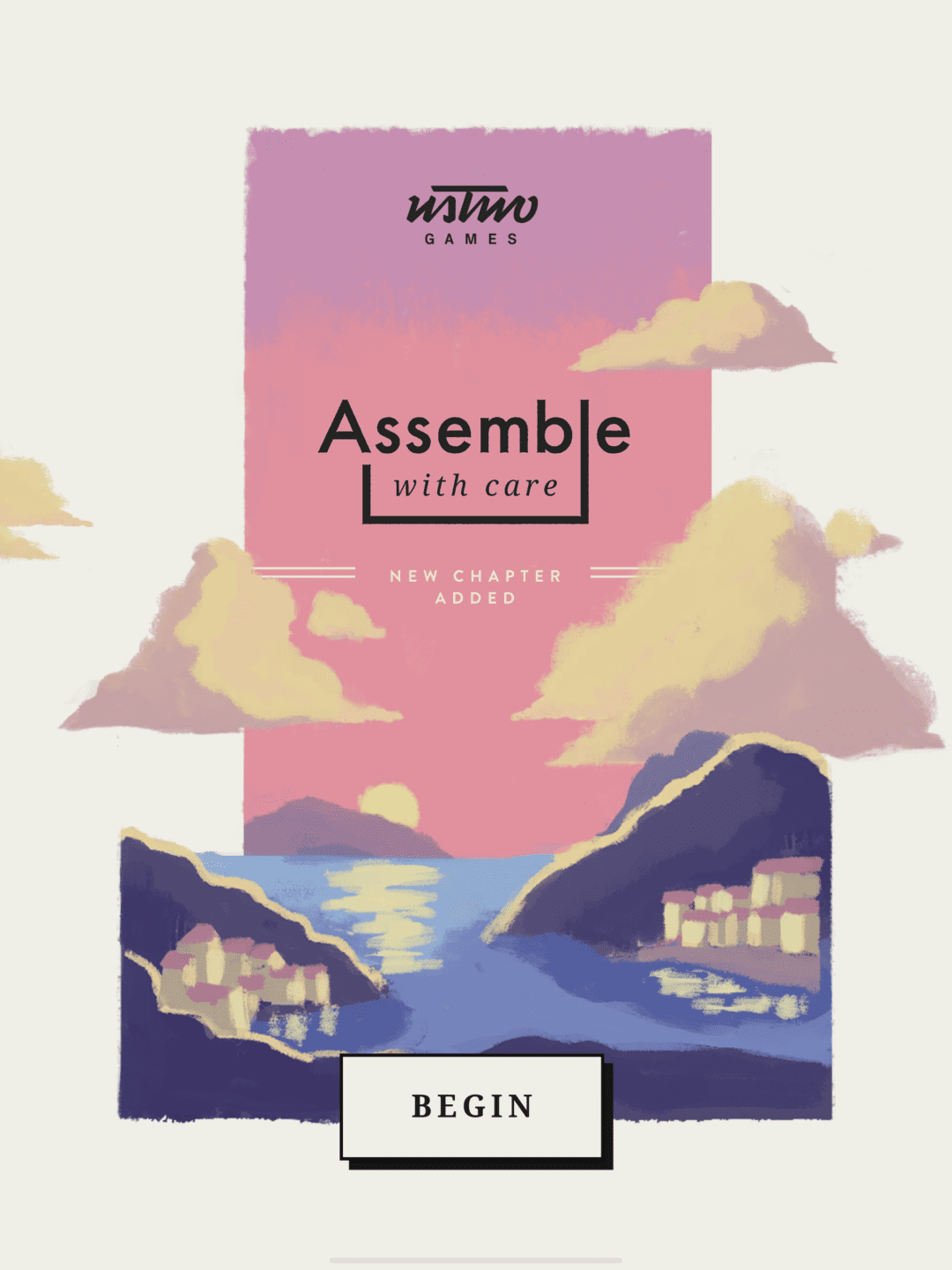 So I went ahead and downloaded it, didn’t read the description or anything. Isn’t that the whole point of the Apple Arcade subscription? You don’t have to worry about paying for each game you install, no in-app purchases, or sly ads running throughout running the gameplay. You simply go ahead, discover, download, keep playing till you end it or uninstall it in minutes at a whim!

From early on in my childhood, my parents gave me tools to fix my toys cars, tools for gardening and even a real tool kit with a wrench, hammer and screwdrivers. They trusted me and my instincts to fix things and not break them or hurt myself with the heavy tools. Well for one, I was never bashing toy cars as other kids would, I would only park them, clean them, fix them and create multi-level parking for them out of a cardboard box. And if a pullback car stopped working, I’d get my Philips screwdriver to dissemble them and fix the spring mechanism. And that’s the reason, 30 years later, I still have my 100+ toy childhood scale model car collection intact and in pristine condition. A lot of credit goes to my parents to have saved them while we moved places and made sure that no other kids get to damage them.

And this habit for fixing things was not just about toy cars but our good old walkman, torches, remotes and so much more. I even opened an Aquaguard water purifier to change the filters of it when I was 10 years old. But there were times when I would open apart something really intricate and would not be able to put it back in one piece. I’m sorry dad for dilapidating your gramophone 🙁

Now let’s talk about the game and how it invigorated the tinkerer in me. Assemble with Care is about fixing objects and relationships while you are at it. It’s a story about Maria, who is an antique restorer and a traveller and how she visits different places, meets new people and helps them fix their nostalgic antique items.

The game is divided into chapters, 14 of them as of now. Each chapter has a new object for you to fix, and a new place you get to visit. In chapter 1 – Arrival, you (Maria) reaches a place called Bellariva and unpacks her suitcase.

Even before the game starts, you need to insert a cassette in the walkman, then plug in the headphones (a reminder to enjoy the game’s excellent background score and Maria’s conversations with headphones on. (Assembling starts from the word go).

When Maria starts to unpack her suitcase, with each item she takes out of the luggage, she shares a personal message and her voice is so soothing matched with this zen-like background score. You have to play it to believe how realistic she sounds and the gameplay feels.

As a first step, you have to pick up the suitcase and open it. Once, the suitcase is open, you will see Maria’s personal belongings – and with each object, there’s a memory attached which shares both visually and in her soothing voice. For example, when she pulls out her sunglasses from the suitcase. She shares that she picked her sunglasses up from the last stop and hopes that she would be able to pull them off.

In between levels, you are welcomed with an interesting story where Maria is either reminiscing her old days or discussing the family heirlooms, VCR, Cameras etc that needs repair with the owner of that object.

As level 1 – Suitcase is just about her unpacking her belongings, she talks about her year on the road and her travelogue. She also talks about herself and introduces herself as a ‘restorer by trade’ – who brings beloved possessions back to life.

In level 2 – Maria is enjoying her first morning in Bellariva and is out exploring the town. She meets this 7-year-old girl called Izzy, who wants Maria (you) to fix her battered cassette deck and cassette. This is where you start assembling things with a screwdriver and other tools.

In the first frame, you get – A cassette deck, two batteries, a screwdriver, a cassette, a pencil and an empty cup. You can pick any tool and start playing around, but I’d recommend starting with the cassette and pencil to fix the tape first. Once you complete that, pick up the cassette deck, rotate it, unscrew it and change the batteries. Each action, needs physical involvement, to pick, rotate the screws, keeping and picking the screws from the cup, taking out each battery and placing in the new ones. It is really intricate but not complex at the same time. More of an artistic way of fixing things and that’s the ethos of the game.

Another interesting design choice was to include a cup of coffee at the bottom of the screen at each level. Tap on it to access the Audio settings or go back to the Main Menu at any point in time during the game. In terms of Audio, you can tweak the VO (Voiceover), Effects and Music.

In terms of settings, you get to change between both Text Language and Voice Language, change the Audio, and see your Achievements.

I’d love to share my experience of all the 14 levels till the Epilogue but I don’t want to take away the charm of the gameplay from you. Hence, I’d recommend you to get yourself Apple Arcade at the earliest if you still haven’t got it and then start playing Assemble with care.

I enjoyed playing this game both on my iPhone and iPad. And the only thing that irked me about this game is the fact that you cant play it in landscape mode even on the iPad. That’s it!

If I have to sum it up then I’d say that Assemble with care is a meaningful puzzle with a nostalgic charm and an evocative storyline. A game that will definitely take you down memory lane while you fix things. So thank you, Ustwo games and Apple for this magnificent jewel.

And after playing if you wonder how the background score is so delightful then go to credits and check out. Hint: It is produced by Apple.