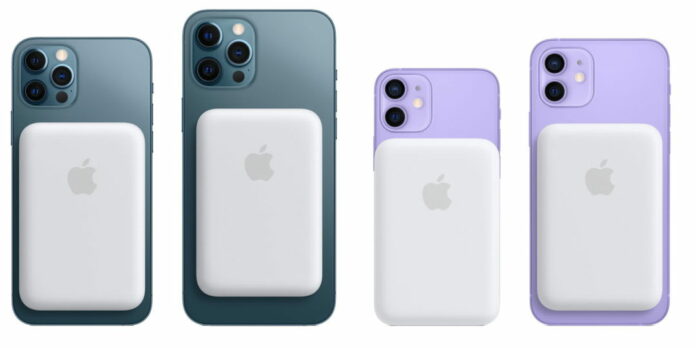 The battery pack for iPhones is something that is introduced for every new generation of iPhones. This time around MagSafe Battery Pack has been launched, it comes with two 1460mAh batteries. As this is Magsafe Battery Pack, it would be only compatible with iPhone 12 Mini, 12, 12 Pro and Pro Max. iPhone 11 series and other devices won’t be supported.

As you can see in the image attached below, this battery pack when connected to any 12 series of device will show the battery percentage in the device too. We expect it to make the Magsafe sound as seen in the Magsafe wallets as this is a Magsafe product, just like the other ones available on the official site.

It would just start charging as soon as the iPhone is attached and that too without requiring users to press a button to turn it on. Users can also plug a Lightning cable into the MagSafe Battery Pack to charge the pack alongside simultaneously passing the current to the attached iPhone. Furthermore, this MagSafe Battery Pack is capable of providing up to 5W of power and Apple has mentioned that users should be using a power adapter higher than a 20W one to get faster charging of up to 15W.

Well with that said, do let us know your opinions on this post Magsafe Battery Pack launched, comes with two 1460mAh batteries by dropping a comment down below.