Oppo Reno 6 Pro 5G: The Unbiased Review – This Beauty and the Beast carries on the legacy of the Reno series 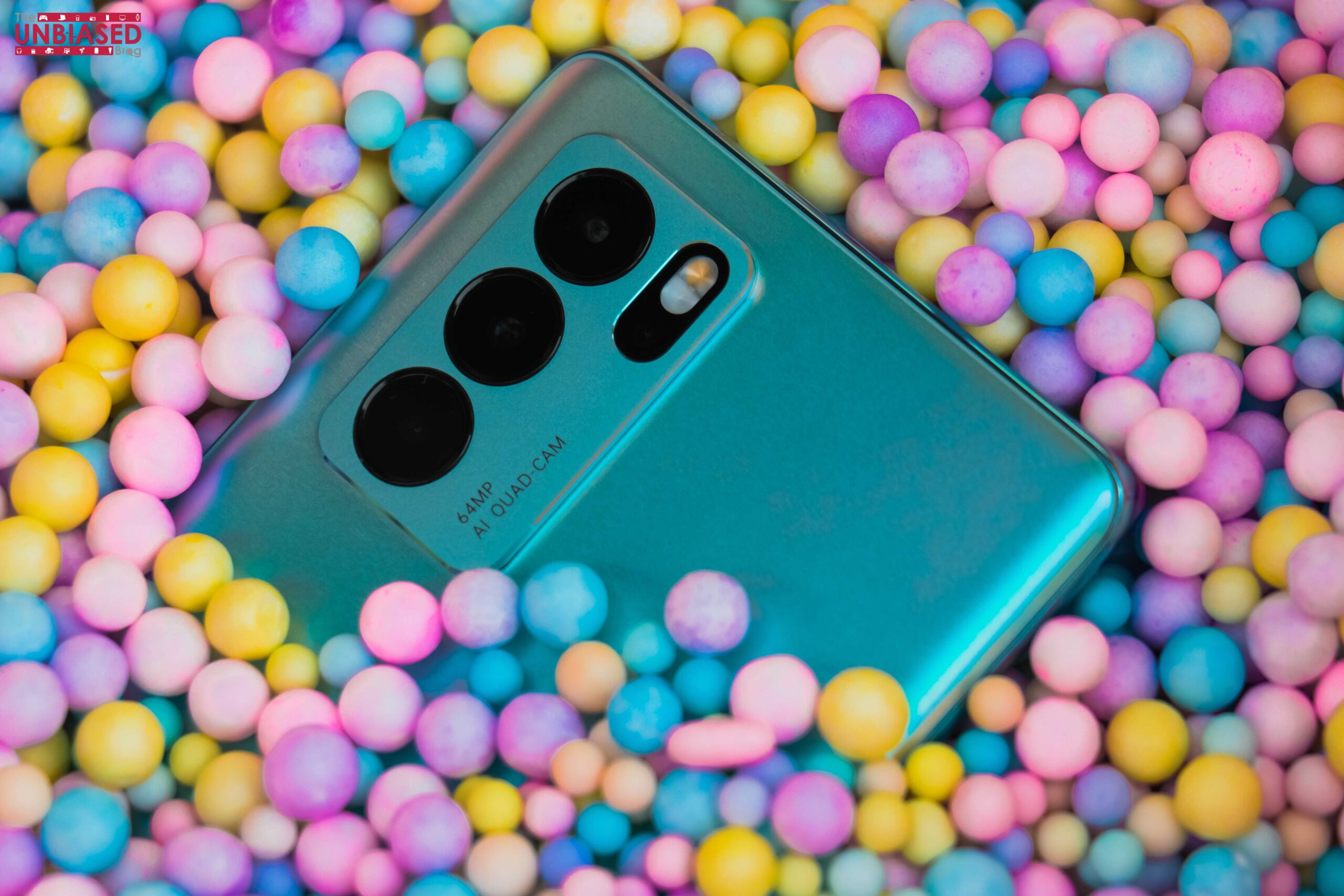 When Oppo Reno 4 Pro was announced back in July 2020, it was among the first smartphones to offer 65W Rapid Fast Charging on to the table in the mid-range segment. As most smartphone users don’t need an absolute and powerful SOC, Oppo’s has traditionally had a strong focus on design and form factor with a slightly underpowered chipset which feels a bit perplexing when someone is spending a price-cut of around 35-000-40,000 INR.

As Oppo has elevated its SOC game to Dimensity 1000 Plus with the Oppo Reno 5 Pro 5G, they’ve managed to keep this legacy to be continued with its latest iteration to i.e, Oppo Reno 6 Pro 5G which is powered by the Mediatek Dimensity 1200. With its new Crystal Diamond Craft 3.0 design, a power-packed chipset and rapid fast charging. But is that enough for this smartphone to carve its place into the premium mid-range segment? After using this smartphone for almost a month, Here’s our review of the Oppo Reno 6 Pro 5G.

Before heading towards review, Here’s a quick look at the specifications of the Oppo Reno 6 Pro 5G:

With its new Crystal Diamond Craft 3.0 design, it boasts a combination of a glass sheet and a reflective material that shimmers as soon as light strikes off the back panel which looks dazzling. This matte finish doesn’t stain fingerprints and smudges which feels extremely soft and lightweight to your wrist. It comes in 2 colour options:- Aurora and Stellar Black and we’re rocking Aurora which looks beautiful.

This slim 7.6mm curvature combined with the 177grams of weight is refreshing which stands it out apart from other bulkier and heavier smartphones. The camera hump is tasteful and it doesn’t jut out much from the rear glass while keeping other smartphones in mind. The frame of the device is made up of metal and the rear construction is made up of glass.

The screen lock/power button is on the right edge of the device which embosses a green colour accent which adds to its stellar visuals. The power button can also double up as a Google Assistant button. Meanwhile, the left edge accumulates the split configuration of the volume rockers and all the physical buttons offer perfect tactile feedback. On the bottom edge are the USB-C port and Sim Tray Slot on its left. There’s no Headphone Jack in this one.

Switching towards the front, It sports a 6.55 inches FHD+ dual-curved AMOLED display which supports a 90 Hz refresh rate and a touch sampling rate of up to 180 Hz which adds fluidity to the experience. It’s possible to get the smartphones with 120hz panels at this price range but I don’t mind using the 90Hz display used here.

The punch hole camera sits at the top left corner of the display. With a peak brightness of up to 800 nits, it ensures that the display is usable under direct sunlight. The curvature of the display doesn’t register accidental touch which makes it a most comfortable curved display. It’s possible to switch into two colour profiles:- Gentle and Vivid; Gentle for natural colours and Gentle for better colour reproduction. However, we’ll recommend using it in Vivid mode.

The benefits of the AMOLED display adds too much darker and deeper blacks and watching content over Netflix is a pleasurable experience. Also, the HDR10+ compatibility ensures high definition content for those who are more into binge-watching. With an aspect ratio of 20:9, Thanks to its bezel-less design, this delivers a huge screen estate which reduces the footprint of the device.

There is Corning Gorilla Glass 5 for protecting it from scratches and drops. With an In-display fingerprint scanner, it’s one of the fastest and consistent in terms of accuracy. We haven’t encountered any failed unlock for our review period of the device.

There are certain things that Oppo usually misses including into its Reno series, lack of Wireless charging support, a higher refresh rate display and IP rating that pull it back to be more competitive. But, it’s not a big deal-breaker. The speakers remain mono which sounds tinny that draws off some fun enjoying the binge sessions.

Earlier, Oppo took feedback from the consumers and onboard Mediatek Dimensity 1000+ Chipset in Oppo Reno 5 Pro. Oppo made sure that Reno 6 Pro has the power you need with the implementation of Mediatek Dimensity 1200 5G Chipset. This chipset goes neck-to-neck to the Qualcomm Snapdragon 865 and 865+ with a higher GPU and 6% higher clock speed.

This chipset is based on a 6nm processor and offers a clock speed of up to 3 GHz with the future-proofing of 5G connectivity.With two RAM configurations:- 8GB and 12GB RAM and two storage configurations:- 128GB and 256GB ROM.After iQoo and Vivo came up with ‘Extended RAM’. Realme was also following up the same with its latest offering with the name of ‘Dynamic RAM expansion’. Oppo is also following up the same culture which is known as ‘RAM expansion’ which allocates internal storage that can be used as Virtual RAM. As our review device has 12GB RAM, it can get up to 7GB of more Virtual RAM which can be activated by restarting the device. This setting can be accessed by going onto Settings-About Phone-RAM. Additionally, the graphical duties are handled by Mali-G-77 MC9.

This smartphone sailed through everything with ease and can handle anything you throw at it. The multitasking didn’t drag on performance neither we didn’t encounter any stutters and lags during our review period. While playing games like BGMI, the highest graphical settings can be set to HDR on Ultra Frame Rates. The frame rates remain constantly on 59-60 FPS without any performance hiccups. The smartphone did get a little warm after 30 minutes which is quite obvious for a smartphone with this form factor. Other games like Asphalt 9, Alto Adventure, Call of Duty, ShadowGun Legends glides like butter. However, if mobile gaming is your priority, Oppo Reno 6 Pro won’t let you down.

It comes with Widevine L1 Certification which let you stream high definition content on other OTT platforms. In the CPU throttling test, the CPU throttled to 78% to its max performance. As far as benchmarks results are concerned, Oppo Reno 6 Pro scored 487913 in the Antutu Benchmark and In Geekbench, it scored 820 in Single-Core score and 2760 in Multi-Core score. With UFS 3.1 storage, the read speed is 1.1GB/s and the write speed is 845MB/s.

The set of cameras on Oppo Reno 6 Pro is a standard affair. It consists of 64 MP Primary Camera,8 MP Ultra-wide Camera,2 MP Macro Camera and 2 MP Depth Camera. Whereas, not having a telephoto lens isn’t perfect at his price segment.

The primary sensor captures natural-looking pictures with slightly warmer tones retaining a lot of detail while zooming into the picture. I liked the fact that there are no footprints of oversaturation in the pictures. Also, it manages to keep the subject well lit while controlling the sunlight’s refraction.

In Indoor Situations, it manages to keep the details in the picture with the optimal digital grain on the shadows and highlights. However, it has enough details to satisfy a lot of users even indoors. The 64MP model captures more details and implies noise reduction to flourish those digital grains. This mode comes in handy when you want to capture a lot of details for a picture.

The 8MP ultrawide sensor captures a 120° field of view which holds a similar colour profile as the primary sensor does. But, it isn’t able to maintain a lot of details due to lower resolution. In outdoor conditions, the noise levels are minimal but as soon as you switch to an indoor situation, the noise level pushes upwards.

The primary camera also supports up to 20x of digital zoom where 10x of digital zoom is the limit where the picture quality is usable but in 20x, the photos are zoomed and cropped which is not usable at all. In low light scenarios, this sensor tries not to blur details while keeping the picture to be more exposed. Using night mode brightens up the picture more which is useful while clicking photos under critical indoor lighting situations.

The edge detection on the Portrait mode works flawlessly well, Thanks to software post-processing which usually happens as soon as capturing any portrait photo. It also has several modes as well i.e AI Colour Portrait and Bokeh Flare Portrait. The 2MP macro camera can capture close-up shots with a distance of 4cms which lacks details but can be useful for taking macro photos in inadequate lighting conditions.

When it comes to video capabilities, Oppo Reno 6 Pro can capture videos up to 4K 30fps with EIS enabled. It captures exposure balanced videos with ease in daylight and as well as low light. In low light, there is evitable grain on the darker portion of the video. We’ve able to capture usable footage with this smartphone.

The 32 MP Selfie Camera impressed us a lot, the phone managed to maintain exposure, skin tones look natural and detailed selfies without any oversaturation. However, you can also fiddle around with beautification mode to capture more perfect selfies. When it comes to making videos, it can shoot up to 1080p 30 fps.

Moving towards software, it runs the latest Color OS 11.3 which is based on Android 11. Oppo brings tons of customization controls on the table which includes some of the features like Always-On-Display, Dark mode, Icon Styles, App Layout, Fingerprint Icon, Colour accent, Font, Notification Drawer and Edge Lightning. Also, there are some nifty add-ons like Smart Sidebar, Quick Re-launch and Quick Return Bubble.

The only problem with the Color OS is that it conceals a lot of bloatware apps through which most of the apps can be removed but not all of them. It’s delivering a fluid animation experience and customisable feature which reminds me of Oxygen OS.

With the 4,500 mAh battery, this smartphone can easily last you a day on 90 Hz and a day and a half on 60hz. In our usage, The screen time was 6 hours and 40 mins which includes voice calls, playing BGMI and COD for an hour, social media usage and camera usage for around half an hour on 90hz.

The Oppo Reno 6 Pro 5G bundles an aesthetic design with a power-packed Mediatek Dimensity 1200 chipset, the 64MP Primary Sensor continues to capture high-quality images into various lighting scenarios and the 65W Fast charging adds a cherry on the cake. However, not having a higher refresh rate and the telephoto lens doesn’t snatch away the fact that Oppo Reno 6 Pro has truly upped the game in the segment.

The other competitors are the OnePlus 9R which has a goodie of Oxygen OS experience and iQoo 7 legend on-boarding Qualcomm Snapdragon 888 with a slight compromise on the battery shell. If you’re looking for a smartphone that holds a slim yet powerful performance onboard with the perks of fast charging, Oppo Reno 6 Pro is the smartphone you should go for. If you’re looking for higher refresh rates and cameras, you have the other options.

Disclaimer: We tested the Oppo Reno 6 Pro for 3 weeks before writing this review. All our reviews are unbiased and are published without the brand getting to read it before you guys. We don’t change our reviews on pressure from brands and that’s the reason we are not sent review units from companies like Samsung, OnePlus, Xiaomi and a few more.

3 thought on “Oppo Reno 6 Pro 5G: The Unbiased Review – This Beauty and the Beast carries on the legacy of the Reno series”