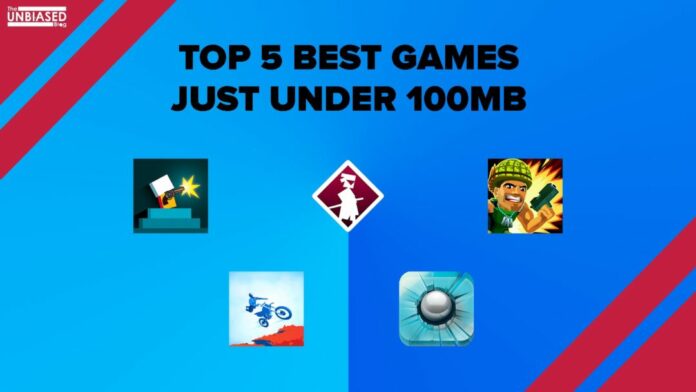 The market of mobile gaming is turning out to be pretty big all thanks to the games like Call of Duty Mobile and Battlegrounds Mobile India. While one may like these games, there are some problems with them too, mainly related to the storage space they take. If you download Battlegrounds Mobile India, with all of its maps and packs then you might be surprised to know that it ends up taking more than 8GB of your phone storage. Now that’s a lot of storage, so here’s a list of the Top 5 games under 100MB, which will provide a fun experience while not taking a chunk of space on your phone.

Starting off with the list, we have a game that’s called Mr Gun, yes you heard that right. Now you might wonder what type of game this is, well obviously you get the idea that this game will have Guns just because of the name and yes it does have good gunplay too. The idea is basically that you just got to shoot the enemy that you would be getting on screen, a successful attempt would help you to proceed while if you don’t hit the enemy, the enemy would hit you instead which means your chances are over and you will have to restart the game.

Second, on our list, we have 2 games but they are two similar games so we are putting them together. As the name suggests, there are two parts to these games and if you are someone who likes shooting games then both of these games would be very enjoyable. Although the story isn’t really that big, the games are just wonderful to play, all you have to do it tap on the screen when the enemy comes to shoot them down, however, you also need to make sure that you are not getting hit by enemies. Overall, as there are two games, you might want to try them in order, or otherwise, they aren’t bad as a standalone experience too.

Next up on our list, we have Ninja Tobu which is a great game and a must-try if you love Ninja games. While we do not have a lot of games on Android where you play as a Ninja, this game makes the concept pretty cool. Your objective is just to jump, climb and reach the top, if you are unable to do that and you fall then you would have to restart the game.

Psebay is one of the racing games that you would enjoy, now we do have different types of games in the list one might enjoy. But gaming without some good racing games just doesn’t feel great, so Psebay might offer one a great experience. You basically have to race on a bike and there are obstacles here and there as well which you would have to avoid.
Download Psebay: Gravity Moto Trials from Google Play Store

Last but not least we also have Smash Hit which is a bit old game but still remains great. It offers a steadily-moving view where you will have to run through to win. The game offers a decorative and colourful passageway with changing music in the background for different levels. You get a total of metal 25 balls (to begin with) and you have to tap the screen to aim and shoot. Smash Hit also offers power-ups, an infinite supply of balls (for a short period of time), which turns the balls into explosives, and an option to slow down the time for some period.

Well with that said, do let us know your opinions on this post Here’s a list of the Top 5 games under 100MB by dropping a comment down below.